Fourth Dimension Inc. > Society and Culture > What is the Right Path for India: Secularism or Spirituality? 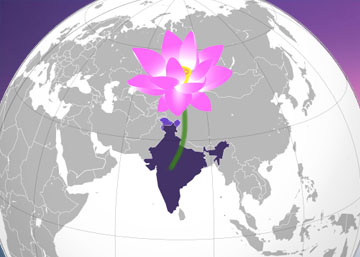 (On the occasion of India’s Independence day on 15th August)

There is almost a consensus among modern intelligentsia that secularism, as it was conceived and practiced in the West, is the best ideology for democratic governance. This secular ideology has its positive features and made important contribution for the progress of western nations. But is this the right political ideology for India with her deep rooted spiritual heritage at the very origin of the nation?

The Foundations of Indian Civilisation

To answer this question we have to go back to some of the unique features of ancient Indian spirituality which gave birth to the Indian civilisation and what is called as “Hinduism.”

In India, whenever someone talks about the need for moulding the nation according to the great spiritual vision of the founders and seers of Indian civilisation, the secular pundits and politicians raise a big hue and cry, calling it as “Communalism”, “majoritism” or “Hindu cultural nationalism.” They argue that such an approach will destroy the “secular pluralism” of Indian society and lead to the suppression and oppression of those who belong to the minority religions. But ancient Indian Kings, especially the great emperors like Chandragupta, Vikramaditya, Harshvardhana, Krishnadevaraya, Asoka, who made a conscious attempt to build a society, polity and culture based on the moral and spiritual values of Indian seers and sages, displayed unparalleled tolerance to minority religious communities like the Buddhist, Jains, Sikhs, and Zoroastrians.

In many of these kingdoms, human society as a whole reached a balanced development where economic prosperity, efficient organisation, intellectual vigour, cultural creativity, ethical sensitivity, religious efflorescence and spiritual seeking went together harmoniously without any conflict. For example a team of American historians make the following observations on the empire of Vikramaditya.

“Fa hsien who had no reason to bestow unmerited praise (he does not even mention the name of the great king Vikramaditya) described the government as just and beneficent. The roads he indicated, were well maintained, brigandage was rare, taxes were relatively light and capital punishment was unknown. He testified to a generally high level of prosperity, social contentment and intellectual vitality when the nations of Western Europe were sinking into semi-barbarism.”1

Another important point to note here is that what is called as “Hinduism” is not like other organised world-religions. Hinduism is not a religion founded by a single prophet with a single inviolable dogma; it is a congerie of religion, philosophies and practices held together by systems of shared values and ideals. In its origin, Hinduism emerged out of a collective spiritual quest of many generations of seers and sages.

There are four unique features of Indian spirituality and its discoveries, which make them tremendously relevant not only for the future of India but also for humanity as a whole.

First, they are not sectarian or dogmatic but something universal, not speculative or philosophical, but experiential and practical. They point towards not to a “One God” distinct or opposed to other gods, but to a Oneness of Being, Life and Consciousness, where we can feel our unity with all humanity, earth and the entire creation as part of our own self, not merely as an idea or a feeling, but as an inner experience or realisation, as concretely as we feel our body as our own self. And the most important part of this discovery is that it comes with a practical dimension in the form of the Science of Yoga, which provides innumerable paths, disciplines and practices to arrive at this experience or realisation of unity.

Third, they are scientific, experimental, which means they can be rediscovered, and re-experienced. They are in fact rediscovered by a subsequent generation of seers which continues up to this day, in the experiences and realisations of modern Indian seers and saints like Sri Aurobindo, Ramakrishna Paramhansa, Ramana Maharishi, Mata Amritanandamayi, and Ma Anandamayi. This is now beginning to be recognised by many western thinkers. For example Ken Wilber, a well-known exponent of transpersonal psychology, states:

“These eastern disciplines such as Vedantha or Zen are not theories, philosophies, psychologies or religion,—rather they are primarily a set of experiments in the strictly scientific sense – to refuse to examine the result of such a scientific experiment because one dislikes the data so obtained is in itself a most unscientific gesture.”2

Fourth, Indian spirituality fostered a rich diversity in thought, art and literature and encouraged free, scientific, philosophical and spiritual enquiry. The spiritual discoveries of Indian seer, sages and yogis expressed itself at the intellectual level in the form of six systems of philosophy which includes logic, science, cosmology and yoga.

Free enquiry, expression and experimentation and vigorous debate are part of the culture of Indian spirituality. Those religions and philosophies like Buddhism, Jainism and the atheistic cult of Carvaka, which questioned or rejected the dominant Vedic paradigm, were given full freedom to propagate their ideas, practice their cults and build their institutions. All the systems of philosophy intensely debated with each other in the cultural life.

At the yogic domain, hundreds of paths and methods are attempted, tested and experimented, including some radical innovations like the left hand path of the Tantra, to attain that higher consciousness beyond the human mind.

This brings us to some important questions on the concept of secularism. In Europe, the philosophy of secularism brought freedom of thought to the social and religious life. Before the advent of the secular ideal, there was no religious or cultural liberty in Europe. There was only the imposition of a single religion and its beliefs on the whole society by the Church.

The secular thought brought the idea of religious freedom which means the freedom for each individual to practice the religion of his choice.  Here we have to understand clearly the meaning of the word “secularism” as it is understood and practiced with potent creative force in the West, in contrast to the totally uncreative way in which it is misunderstood and misapplied by the modern politicians in contemporary India.  Secularism, as it is understood by early European thinkers who conceived the idea, is not atheism or anti-religious but neutrality of the State to the religious beliefs of the people, freedom for each individual to pursue the religion of his choice and equal respect for all religions. Another important feature of Western secularism is that religion should be kept apart from politics or in other words, religion and politics should be kept in two separate compartments and should not be allowed to mix with each other.

Let us now examine these tenets of secularism from a higher spiritual perspective. If religion means dogmas of organised religion and the religious beliefs of people then neutrality of the state to religion and keeping religion and politics separate are admirable principles. But is it necessary for the state to be neutral to a universal and uplifting spiritual vision like that of ancient and modern Indian seers, which can elevate human life to a higher dimension of consciousness and life? What is wrong if a state actively and consciously sponsors such a vision and strives to mould the nation according to this vision, especially when this vision is the very source and foundation of the Nation, rooted in history, culture, civilisation, consciousness and destiny of the Nation?

Indian civilisation was created and built on the foundations of such a spiritual vision. Spirituality is the very soul and genius of India. In the western civilisation spirituality is an exotic flower which blooms occasionally in a secular soil. But in India spirituality is the very soil and ground of her civilisation. The spiritual vision which gave birth to the Indian civilisation makes no distinction between the secular and spiritual life; it saw with an inner gaze that there is a deeper spiritual truth behind every human activity—business and politics, art and science, society and culture. One of the aims of this spiritual paradigm of life is to awaken this deeper truth, and live or govern every activity of our life with a clear understanding of this deeper and higher truth of the Spirit.

We, in India can progress better and faster, if we can draw our inspiration in every activity of our life; private and public, secular and religious, openly and unhesitatingly from our spiritual heritage. For example in science, the great Indian scientist, Jagdish Chandra Bose, who demonstrated the presence of life in the stone and the plant, drew his inspiration from the vedantic and tantric philosophy. Our mathematical genius Srinivasa Ramanujam said that he received his equations in a dream from a Goddess who is his chosen deity. Some Nobel laureates in physics like Erwin Schrödinger and Heisenberg found a deeper meaning in the discoveries of new physics in the light of Indian insights on the unity of all life. Albert Einstein said to an Indian scientist that he drew his inspiration from the Bhagavad Gita. Charles H. Townes, a Nobel laureate in physics and the inventor of Laser said “Understanding the universe, I think is somewhat parallel to our understanding of our relations with the creator. In this search for truth, it will be certainly beneficial to incorporate the spiritual principles in their scientific works”

We have in India a spiritual treasure which can lead to a deeper and better understanding of the truths, laws and principles of life, Nature and the Universe, and a great science which can transform our life. If we can convert this great and unbroken spiritual heritage of our nation into a living force of inspiration for every activity of our individual and collective life, it will not only lead to a lasting regeneration of our nation but also it will make India into a spiritual guru of the world, leading humanity and earth towards their spiritual destiny.

So the western concept of secularism which is indifferent or neutral to spirituality is not suitable to India because it is not conducive to the Indian swadharma and will not be of much help in bringing forward the unique spiritual potentialities and genius of India. For the regeneration of India we have to build a new system of polity, government, management, education and culture based on the spiritual vision and values of our civilisation.

The most important is the fifth, Yoga, which means the principles and practices of the inner disciplines which can lead to the moral, psychological and spiritual evolution of the individual and helps him to reunite his soul with the inner spiritual source of his own being and the world, which is the highest goal of all religion. Without this practical dimension of Yoga, with an emphasis on practice, mere theoretical or conceptual understanding of religion or spirituality may not lead to any great spiritual awakening. This doesn’t mean intellectual understanding is unimportant. In the awakening of a collectivity like a nation, changing the thought-process of people through the right and the true idea is very important. But for a lasting spiritual awakening we must also provide the discipline for living the idea in life and action and converting it into an inner realisation in consciousness.

One thought on “What is the Right Path for India: Secularism or Spirituality?”