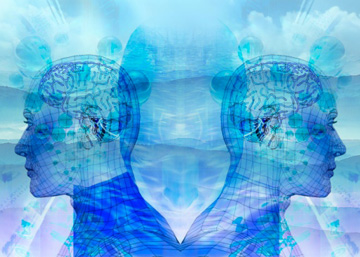 The true basis of education is the study of human mind. Any system of education which ignores the instrument of study is more likely to hamper and impair intellectual growth than to produce a perfectly equipped mind.

There are distinct layers in our mind, which are mapped out with great clarity in Indian Yogic Psychology. This article describes the nature of these different layers of the mind.

The lowest layer of the mind is what we call the chitta, the substance of which the mental awareness is made of. It is this which holds all the impressions that come into your mind as a memory. The substance is extremely plastic. It can take impressions of all the events that happen in your life and there is an automatic subconscious memory which records everything that happens. Our problem is when our intellect tries to search for a specific memory and cannot always find it. Our conscious memory is not very effective; but our subconscious memory is automatic and perfect. If I asked you, “How many steps have you taken since you woke up this morning?” You will surely not know. But if I put you under hypnosis and ask your subconscious mind how many steps you took, it will say exactly 516 (or whatever) because every single detail of what happened to you is automatically registered in the subconscious memory of the chitta. When we speak of a poor memory, we mean by it the conscious memory that has to access the subconscious memory and pull out information. It depends on the clarity and calm of the chitta. Stilling the mind makes it more capable of observation as well as recalling precisely in detail. So it is in the chitta that the basic memory of observation is held.

The next layer is the manas which is the sense mind, the mind turned to sensory experience, living by it and in it. What does it do? From the observation it makes a comparison, association, orders, and organizes and even throws up sense-driven and sense-dependent thoughts. Let us follow its working as you wake up from sleep, which is the time when the sense mind is most dominant. At first you feel only sensations: you feel hot or cold. Then this throws up a sensory emotion, you are comfortable or uncomfortable. Your logic is not yet operational, just the senses throwing up an idea of discomfort.

Then a crude logic comes in and asks why. It commands the senses to look and listen and concludes from their observations and related associations, “Oh, the fan has stopped! Why is that? Oh, there is a power failure!” You see how that comes later. All of this sense-based thought process takes place in the manas. The sensory logic of manas acts as a first filter taking information to the next layer of mind which does the real thinking.

This third layer of the mind is the buddhi, the intellect proper. This is the part of the mind which is self-aware. In the lower layers there is sensory awareness, but not self-awareness. That is why, when you wake up from sleep, at first you are not aware of yourself as a self-conscious person you know yourself only by your sensations. The experience of “I am thinking” only happens when you are fully awake. Then you can say, “Oh, I am thinking, but my thoughts are confused right now.” This is the part of the mind that can stand back from itself, observe itself, and even change itself! No other creature on earth, apart from humans, has this ability. It is this self-awareness that makes us capable of changing ourselves and exceeding our own limitations. Its development is therefore of crucial importance for us.

How do we know that other animals do not have self-awareness? By a simple experiment: place the animal in front of a mirror. Most animals think that the mirror image is someone else because they live only in the sense-mind! The more sophisticated animals recognise that it is not someone else, but an image somehow connected with them. But they cannot see themselves in it as we do. How can we test that? You put a spot on the animal’s tail and then put it in front of the mirror. When it sees the spot on the image of the tail, the self-aware animal will immediately turn to look at its own tail because the sense of “I-ness” is there and it identifies the image with itself.

There are only three creatures which can do that: the chimpanzee, the dolphin and the human being. No other animal has it. This is such a precious gift. But neither the chimpanzee nor the dolphin has it to the extent that they can think for themselves, “I want to change myself. I want to learn better. I want to concentrate. My mind is not clear today, and so I am going to will myself to become more clear and concentrated.” It is the buddhi that makes us capable of conscious and unending progress.

One thought on “Layers of the Mind”