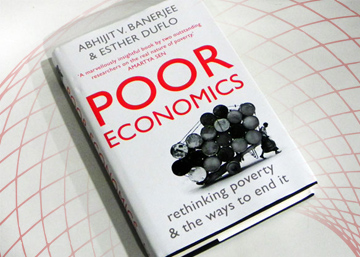 Poverty is a subject of great interest to economists and there is a voluminous literature on this subject discussing the problem and remedy in great detail. The authors of this book under review Abhijit Banerjee and Esther Duflo are two senior and award winning economists from the famed Massachusetts Institute of Technology, MIT. The book is a winner of the FT/ Goldman Sach Business Book of the year Award 2011. Amarthya Sen, the Noble Laureate in economics describes the book as “Marvelously Insightful”

In this book authors study in minute details the problems of the poor who live on the less than 1$ a day. “Poor economics is a book about the very rich economics that emerges from understanding the economic lives of the poor” says Banerjee and Duflo. “it is about the kinds of theories that, help us make sense of both what the poor are able to achieve and for what reason they need a push. Each chapter in this book describes a search to discover what these striking points are and how they can be overcome.”

A true solution to the problem of poverty has to tackle the malady simultaneously at two levels: first, in the long-term, a progressive attempt towards eventual elimination of poverty. Second, in the short term, simple remedies which can help the poor in their present problems and in an incremental betterment of their lives. Banerjee and Duflo deal with both but with a greater emphasis on the second; in the following passages they describe the two aspects forcefully and elegantly:

“Given that economic growth requires manpower and brainpower, it seems plausible, however, that whenever that spark occurs, it is more likely to catch fire if women and men are properly educated, well fed, and healthy, and if citizens feel secure and confident enough to invest in their children, and to let them leave home to get the new jobs in the city.

It is also probably true that until that happens; something needs to be done to make that wait for the spark more bearable. If misery and frustration are allowed to have their way, and anger and violence take over it is not clear that the spark will ever arrive. A social policy that that keeps people from striking out because they feel that they have nothing to lose, may be a crucial step toward preserving the country’s date with that elusive takeoff”

Among the many strategies and remedies for resolving the problem of poverty, Banerjee and Duflo stress mainly on the following:

Another unique feature of the book is that ideas and theories are supported by authentic empirical data and research. For example, the authors cite the following research surveys to illustrate the substantial impact of nutrition on education and poverty.

“In Tanzania children were born to mothers who received sufficient amount of iodine during pregnancy completed between one third and one half year more schooling compared to their younger and older siblings who were in utero when the Mother was not getting these capsules. Although half a year of education might seem a small gain, it is a substantial increase, given that most of these children will complete only four or five years of schooling. In fact, based on their estimates, the study concludes that if every mother were to take iodine capsules, there would be 7.5 increase in the total educational attainment of children in central and Sothern Africa. This in turn could affect the child’s productivity throughout his or her outer life”

This book as a whole is an important contribution toward understanding the problems of the poorest people in the world. However, as a part of the long–term remedy to poverty, the authors could have discussed in some detail the impact of inequality on poverty. The problem of inequality is now recognized by all economists. It figures prominently in the reports of UN and institutions like World Bank. The facts and figure point out that a small percentage of the richest people mop up most of the resources, income and fruits of development in the world. This shows a serious lacuna in the distribution and sharing of wealth a better distribution and a much more equitable sharing of wealth … and the instruments of wealth like technology… from the rich to the poor can have a substantial and lasting impact on poverty. What is the cause of this unjust and unfair inequality in the world and what can be the lasting solution to type problem? What tis the role of moral and psychological factors like exploitation greed and selfishness in fostering and perpetuating this inequality? Can a higher system of education with an emphasis on the moral and spiritual development of the individual, which can awaken and implant the impulse to share and give on a large scale in the young minds lead to lasting impact on inequality and poverty? Such questions may be beyond the scope of the present book under review. But they have to be discussed and debated by everyone who is interested in finding a lasting solution to the problem of poverty.