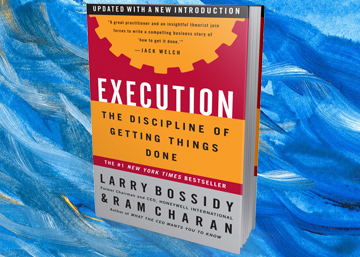 (Review of the book Execution: The Discipline of Getting Things Done by Larry Bossidy and Ramcharan, Business Books)

Contemporary management literature is an ocean of concepts, theories, visions, strategies and techniques. However, not much is available on how to execute these lofty ideas and concepts to produce concrete results. It is here where lies the importance of this book under review by Larry Bossidy and Ramcharan. Jack Welch, renowned former CEO of GEC, describes the book author (while critiquing the book) as “A great practitioner and an insightful theorist join forces to write a compelling business story of how to get things done.” The ‘great practitioner’ is Larry Bossidy who was, while writing this book, Chairman and CEO of Honeywell International, with a turnover of more than 25 billion, is a diversified technology and manufacturing firm, and also served as Chairman and CEO of Allied Signal, an American aerospace, automotive and engineering company. The ‘insightful theorist’ is Ramcharan, a highly sought after consultant and adviser to CEOs and senior executives ranging from startups to well-known Fortune 500 firms such as GE, Ford, Dupont, etc.

Talking about the importance of execution in contemporary business, Ramcharan says: “Most often today the difference between a company and its competitor is the ability to execute. If your competitors are executing better than you are, they are beating you in the here and now. Execution is the great unaddressed issue in business world today. Its absence is the single biggest obstacle to success and the cause of most of the disappointments that are mistakenly attributed to other causes.”

He clarifies his statement with a very interesting and compelling example.

A CEO was sitting in his office late one evening, looking tired and drained. He was trying to explain to a visitor why his great strategic initiative had failed, but he couldn’t figure out what had gone wrong. “I’m so frustrated,” he said. “I got the group together a year ago, people from all the divisions. We had two off-site meetings, did benchmarking, got the metrics. McKinsey helped us. Everybody agreed with the plan. It was a good one, and the market was good. This was the brightest team in the industry, no question about it. I assigned stretch goals. I empowered them—gave them the freedom to do what they needed to do. Everybody knew what had to be done. Our incentive system is clear, so they knew that the rewards and penalties would be. We worked together with high energy. How could we fail? Yet the year has come to an end, and we missed the goals. They let me down; they didn’t deliver the results. I have lowered earnings estimates four times in the past nine months. We’ve lost our credibility with the street. I have probably lost my credibility with the board. I don’t know what to do, and I don’t know where the bottom is. Frankly, I think the board may fire me.”

Several weeks later the board did indeed fire him.

We can see here that this CEO has done all the right things except a missing factor which leads to concrete results. In this book, the authors try to bridge this “Gap which nobody know” between doing the right thing and getting things done. They spell out, with many examples of success and failures from the corporate world, how to incorporate a pervading discipline and culture of execution into the whole organization. The first part of the book explains the need and importance of execution. The second part of the book describes the building blocks of execution. The third part of the book brings out the core processes of execution, such as People Process, Strategy Process, Operation Process, etc.

This book is for the hardcore executive seeking for business success. But is this kind of traditional business success enough for the future world? Peter Drucker is probably the first among business thinkers to question some of these traditional notions. In one of his writings, Peter Drucker said that it is a very wrong notion to think that the purpose of a business organization is to earn profit or enhance shareholder value. He said that the aim of a business organization is to satisfy the customer first and not to earn profit. If you focus on customer satisfaction, profit may come as a result but profit is not the purpose of a business organization. However, even this idea of Drucker seems to be getting out-of-date in e-commerce. Most of the e-commerce firms, including the big ones such as Amazon are not making any profit, but still many of them have a great shareholder value and attract investment, because they serve customer needs and valued for their future potential. Apart from customer satisfaction, there are other and higher values which are emerging in business such as environmental and social responsibility and employee wellbeing. Many investors are now including environmental and social performance of the company as an important factor in assessing firms, what is now called ‘Socially Responsible Investing’ (SRI). So the present or contemporary challenge execution is to build an organization which contributes positively to the economic, social, ecological and human wellbeing of the community, humanity and Nature.

Beyond this present challenge, there is a future challenge. There is an inner evolutionary impetus, which is driving humanity and earth towards a higher progress beyond the mundane and the material towards a moral, psychological, aesthetic and spiritual development. Success in the future world depends on the ability of individuals, groups, organization and nation to align themselves with this higher evolution. This will be an execution challenge of the future which may be described as “how to create an organizational system which can help in this higher and inner evolution of the individual and groups in the mental, moral, aesthetic and spiritual dimensions and also to express this inner progress in every activity of the outer life”.

However, in a managerial perspective, execution is the art of converting a mental idea or decision into a material reality. This book provides practical and detailed guidance on how to do it. So even for a leader who wants to realize a higher ideal beyond the bottom-line or business success, this book can provide useful clues on the practical aspects of how to convert ideas into tangible actions and material realizations.