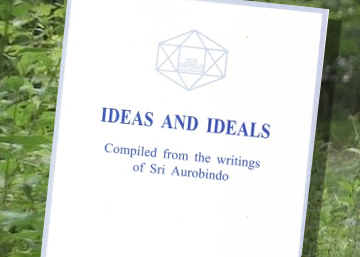 The title of the book is a little misleading because this book is not about philosophical abstractions on ideas and ideals. The topics presented in this compilation from Sri Aurobindo’s writing are on the issues and problems of contemporary political and economic life, for example, ‘Credits of Materialism’, ‘Business and Spirituality’, ‘Leadership in Politics’, ‘Small-sized States’, ‘Statecraft’, etc. Sri Aurobindo’s insights on the subject present a balanced perspective on each topic.

Take, for example, the phenomenon of ‘Materialism’. It is customary for spiritually inclined people to condemn materialism. But Sri Aurobindo brings out the positive contributions of scientific materialism to human progress, even while pointing out its limitations. Sri Aurobindo describes how materialism has “immensely widened the knowledge of the race and accustomed it to a great patience of research, scrupulosity, accuracy”. Similarly, with ‘Business and Spirituality’, can these two domains of life which appears contradictory, come together? Sri Aurobindo answers in the affirmative and says that it is part of the gospel of the divine teacher in Bhagavad Gita.

On this aspect of Gita’s teachings, Sri Aurobindo states “that a man by doing in the right way and in the right spirit, the work dictated to him by his fundamental nature, temperament and capacity and according to his and its dharma, can march towards the Divine. It is in his view quite possible for a man to do business and make money and earn profit and be a spiritual man, practice yoga, have an inner life.”

And again, can there be ‘Love in Politics’, which looks much more contradictory than business and spirituality. “Love has a place in politics,” says Sri Aurobindo. “But it is the love of one’s country, for one’s country men, for the glory, greatness and happiness of the race, the divine Ananda of self-immolation for one’s fellows, the ecstasy of relieving their suffering, the joy of seeing one’s blood flow for country and freedom, the bliss of union in death with fathers of the race.” On political leadership, Sri Aurobindo says “The authority of a political leader depends on his capacity to feel and express the sentiments of the people who follow him; it does not reside in himself. He holds his position because he is a representative man, not because he is such and such an individual. The moment he tries to misuse his position in order to impose his own will upon the people, instead of making their will his own, he forfeits all claim to respect.”