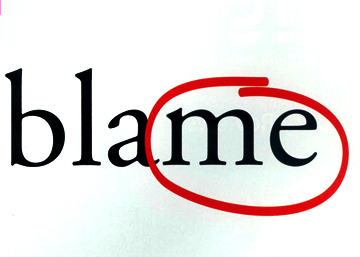 In our work or relationships, whenever something goes wrong, our first instinctive reaction is to blame others. We are not aware of our own contribution to the mess or even when we know it we tend to ignore it and cling to the blame game. In an article in Harvard Business Review with the interesting title ‘Blame’ Kevin Sharer, former CEO of Amgen, describes how he was able to rise beyond the tangle of blame to harmony and understanding.

The company headed by Sharer got mired in deep financial crisis and marketing problems. And Sharer describes the situation and his state of mind: “My two most capable, trusted colleagues were in charge of our day-to-day response. But it became apparent that for the first time in their six-year partnership they were not effective as a team. In some ways they were making things worse. My state of mind wasn’t pretty. If you had a view into it, you have seen disgust, fury, fear, indignation.”

And Sharer was blaming his colleagues for the crisis facing his company. This is a very common failing of our too human nature. And it is not easy to get rid of this mindset created by the ego.

The Mother of Sri Aurobindo Ashram describes the right ideal or attitude in such situations. “If in the work you meet with some difficulties, look sincerely into yourself and there you will discover their origin.” This requires much courage, maturity and a deep honest and objective inner observation. Sharer was able to harness these inner resources within him and recognized his own contribution to the problem. “The question occurred to me,” says Sharer “How much of my colleagues’ performance problem did I actually own?” and describes what he has discovered:

“Call it an epiphany, but that question inspired me to start scribbling. Soon I had a long list of things I could and should have done differently all the way from resource allocation and long-term capacity building to my engagement in the immediate crisis. I want to be clear that this was not an exercise in self-loathing or defeatism; it was an authentic, honest, and complete analysis of how I had failed to do my part.”

The process of healing, redemption or transformation begins from this point of sincere acceptance of our own contribution, wrong attitudes or mistakes and stop blaming others. We must understand that our inner condition made of thoughts, feelings and attitudes are contagious. As long as we dwell in the blaming mode, emanating negative vibrations such as resentment, it is transmitted to others, invoking similar feelings in them and perpetuates the conflict. But the moment we stop blaming and accept with an entire sincerity our role in the conflict, it releases a positive and subtle moral force which acts on others at the inner level.

The next step is to harness the courage to admit our mistake openly to our colleagues, which Sharer was able to do. “The following Monday, when the three of us met to review where we stood I arrived with a different attitude,” states Sharer. “I started the meeting by describing calmly and with total candour, how decisions I had made in the past had landed us where we are, and what I was prepared to change. In short, I owned the problem.” And the result was a total healing and complete dissolution of all conflict. “It stunned my colleagues,” states Sharer. “Whatever defensiveness they were feeling was swept away.” And the following conclusive remarks of Sharer were very similar to the views of many modern spiritual teachers:

“Now when issues arise at work—or in personal relationship for that matter—I know it is fundamental to me to look deeply and objectively at my own contribution to them before accepting others to change and improve.”

For example, look at following passage from the Mother, one of the greatest spiritual masters of our age:

And the story ends with a happy note. “At the end of the crisis,” says Sharer, “we and our company emerged better than ever.”