Fourth Dimension Inc. > Leadership > Entrepreneurship > The Strength of a Woman 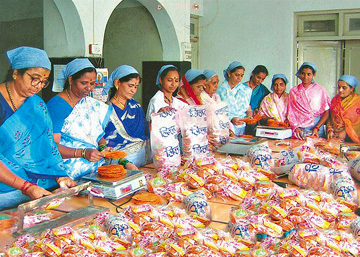 Up and down winding stairs which are spattered with beetlenut and grime, a pair of young girls chase each other, giggling. Their father yells to them from their family’s tiny apartment halfway down the corridor. There is bedding on every corner of the landings, laundry hanging from the ceilings, the contents of everyone’s lives spilling out into the communal parts of the building. This is an apartment block in the old quarter of Mumbai (Bombay) and on the top floor, next to the old man with books up to his ceiling, is the headquarters of Lijjat, India’s biggest papad producer.

No bigger than a double bed, this office is the only remaining sign of the small roots from which Lijjat has grown. Forty years ago, a group of seven women who lived in the block met on the landings and decided to try and make papads in their spare time. They borrowed Rs.80 to buy the ingredients, and the first four packets were sold to neighbours in the busy residential area. Soon there was a thriving ‘local’ market and, as the fledgling business continued, the group of women grew, attracting the attention of a well-known social worker, Shri Chaganbapa. With his advice and support, sales reached a modest Rs 6,196 by the end of the first year.

Lijjat’s full name is Shri Mahila Griha Udyog Lijjat Papad, meaning women’s house industry, and today it has 60 branches and 32 divisions all over India. More importantly, there are as many as 40,000 women making papads at home. Every day, they roll a staggering 19 million between them. But despite these vast numbers, the grassroots approach of the business has never changed. A visit to Mumbai’s Wadala branch early in the morning, reveals a friendly hubbub of women who have come in to get their papads weighed, and to pick up their small cash earnings and their next lump of dough. In one room there are women mixing and pounding, in another they are weighing tall piles of papads, and in another, they are handing out cash. “There are 500 ladies coming here,” says the centre’s co-ordinator Prattibha, “but we all know each other. It is like a family. I know every problem of the ladies, so I can help them, even at home.”

Pratibha even performs home visits, when she knows that one of her ‘ladies’ is suffering domestic violence. “Eighty per cent of the women are illiterate and most are poor. Many have husbands who don’t have jobs, who abuse drugs and alcohol, who beat their wives. Working for Lijjat gives the ladies economic viability, a level of independence, if they do have problems at home,” she says. Jyoti J. Naik is typical. She started rolling papads when she was just ten years old, to supplement the household income: “Then my mother died when I was sixteen and, as the eldest, I had to support my siblings, buying rice and vegetables.” Today, she is 39 and married with her own children to support, which she does with her earnings as president of Lijjat’s central committee. “I like buying clothes for my daughter and two sons, as well as necessities. It brings an extra bit of cash which I can spend, instead of asking my husband for money,” she explains.

Kamal D. Dhandore, on the other hand, is happy to remain as a papad-roller. She started 27 years ago, at the age of 30. Grabbing a rolling pin and lump of dough, she demonstrates her skills, producing a perfectly circular papad within seconds.

Lijjat is not fussy about who it employs – as long as they are capable of rolling dough into circles like Kamal. “We go to their house, and if they live in a hut with no sunlight for drying the papads, or next to a gutter, they can come and work at one of the centres,” says Irene Almeida, spokesperson for the organisation. Most are given two days’ training, a teak rolling pin and an aluminium rolling board, then they are ready to start. “As long as they agree to roll out a minimum of three kilograms every day (an amount which would take two or three hours to roll and which would earn them about around Rs. 90), they can come and go as they please. They are not committed, there is no routine. The whole point is that women can fit papad-rolling around the demands of family life. If their children are ill, for example, they don’t have to come.”

But despite the emphasis on ‘casual’ work, this is a business with tremendous pride. Every papad-roller is a part-owner of the business and is called a sister-member, with a right to vote on business policy. In fact, two years ago, the members were unhappy with the president of 14 years, and voted her out of office. Recently, they voted to stop their existing savings scheme, in favour of taking home all their earnings. Most talk passionately about the organisation, about the power it has to change lives. “We are proud of being owners,” says Jyoti. “There is nobody to restrict us, we are in control of our own future. Before Lijjat, women didn’t know what life was, they never left home, never achieved anything for themselves.”

It is this pride that informs Lijjat’s ‘no gifts’ policy. “Lijjat has never accepted, nor is it ever going to accept, any charity, donation, gift or grant from any quarter,” says the mission statement. On the contrary, Lijjat members donate collectively from time to time – last year to support the Red Cross in their relief work after the Khanna Railway accident and to ‘adopt’ a quake-affected village, where the money could help rebuild housing. In fact, Lijjat prides itself on uniquely bringing socio-economic empowerment to women without using aid of any sort. “We are a business, with a strong quality-control policy and uncompromising management principles,” says Irene. “Our sales turnover is 300 crores (44 million pounds), and our earnings also increased – an increase which was shared between sister-members. And we export to the UK, the USA and the Gulf countries.”

Although Lijjat is very much a business, that doesn’st mean compromising on the treatment of staff. Every day, a bus does the rounds, picking up women from different areas and bringing them to the centres, so that they don’t spend their earnings on transport. Meanwhile, the social worker for Lijjat’s Wadala branch, Sangita Shrodi, says: “These women cannot afford to buy specs, or to get first aid, so we give them health education and arrange eye-tests if they need them. Soon we will be running out an AIDS-awareness programme to all of the sister-members.” There are even computer courses available for the children of members during school holidays.

But most beneficial of all is the literacy programme for the women themselves, called Akshardeep, or ‘the lamp of learning’, which started two years ago. “We see the women reading magazines all the time now: even when they are travelling in rickshaws, they read,” says Irene. “They find it very exciting.”

In a small room, beside the mixing area at Wadala branch, there are grown women sitting on the floor, writing painstakingly on their own small blackboards, working their way through the alphabet. “I know half the letters,” says an older woman called Saraswati Ghag, “although it has taken me nearly one year as my husband is ill.” Even this limited knowledge has already brought improvements in Saraswati’s life. “I have confidence now. I live only two stations away, but before I was not confident enough to go anywhere on the railway system. Now I know some letters, I can reach home if I get lost.”

So far, 5,000 women have started the programme, with interest still increasing. “My daughters can read and write properly,” says Sheela Waghamare, “so they help me when they get home from school. They help me write letters to my relatives who I haven’t been in touch with for years.”

It is hardly surprising that Lijjat’s logo says ‘Symbol of Women’s Strength’, a logo that is emblazoned proudly on every bit of Lijjat packaging. Every time any restaurant, hotel, shop or individual buys a packet of 32 Lijjat Papads – flavoured with pepper, green and red chillies, masala or garlic – they are reminded that this household name is a product of female endeavour. Everyone in India knows that it is women who are meeting the growing need for fast food with their ready-rolled Lijjat Papads. As Irene explains: “It is good that our work is so public – on sale in the streets and shops. That way, people are made aware that women can run big businesses as well as men.” And, as long as papads continue to act as a staple in almost every Indian meal, it seems that the future of Lijjat – and its 40,000-strong team – will be secure. “We are expanding faster than ever,” says Irene, “so we must be doing something right.”