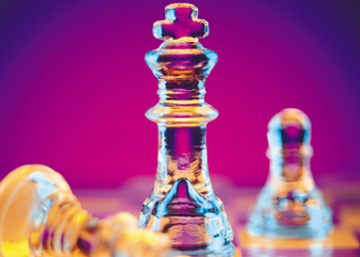 The ancient Indian thought held the view that sovereign power must be guided by spiritual wisdom, which means the wielder of power must either develop the spiritual consciousness or listen humbly to those who have this higher consciousness and rule under their guidance.

Plato spoke of the philosopher-king. He called for a monarch who was also a man imbued with wisdom, not just valour. Let us note that he did not mean that a philosopher should take the reins in his hands. Philosophers are reputedly out of touch with realities, their heads are in high clouds, – say the critics. And perhaps there is some truth in their charge. Anyway, we are thinking of kings with the maturity of wise men. The ancient Aryan society always coupled the sovereign power with spiritual guidance. The kings always consulted the sages in difficult situations. The point is that he or those at the head of affairs should function at a higher level of consciousness.

This principle, however, has got clouded with the advent and spread of the institution of political democracy. Admittedly the level of the demos is always pretty low. Things come to be decided at a popular level which means that expediency, opportunism, sharing of spoils, have a heyday. The merit of a question hardly comes into the picture. Standards come down, values are given the go-by and collective progress suffers a set-back.

Experience and practical wisdom, however, point to the need of reaffirming the old principle: one who heads must have a consciousness which is higher than that of the most. He must be one who has exceeded his individual ego: his preferences, his insistences, his personal mould. He should have something of a universal consciousness which embraces the interests and aspirations of all who come under his management. He must be both wider and higher than the rest. It is only then that he can be trusted to strive for the collective welfare and carry others with him. He must identify himself with the true interests of the community and not let his own personal preferences interfere. He should be able to set these aside. In other words he must be able to forget himself. Of course it does not mean that he should be just a mouth-piece for the commonalty. He should be a leader whose consciousness is above all manipulation, strong enough to impose itself correctively, warm enough to gain the acceptance and loyalty of the right-thinking elements.

Only such an individual with a broad, high consciousness can fruitfully organise and lead a collectivity. All other considerations, viz, wealth, skill, vital power, are of secondary importance. Let us also remember that a man with such a higher consciousness will not demand position. It goes to him naturally if there is no extraneous interference. In any case all turn to him inwardly.