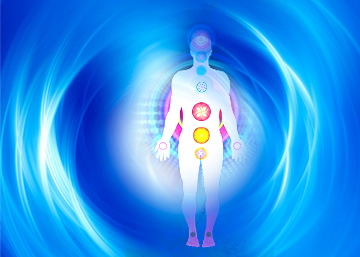 According to the philosophy of Tantra all the powers and potentialities of cosmic energy lies dormant in our human body and lies coiled like a snake in the energy-centre near the bottom of the spinal cord. This dormant cosmic energy in the body, called as kundalini can be awakened and make it move upward through a process of yogic disciplines. As this serpent power, kundalini, awakens and ascends through various energy centres (called as lotus) in the body, it enables the yogi to come into contact with or enter into higher states of consciousness with corresponding greater powers and faculties of knowledge, feeling and action. And finally when the Kundalini energy arrives at the head centre, it unites with Shiva, Divine Being, leading to supreme bliss and liberation. This is the process and goal of kundalini yoga of Tantra. This article presents a poetic and experiential description of the process of kundalini yoga. (1)

The Path of Kundalini Yoga

In its deep lotus home her being sat
As if on concentration’s marble seat,
Calling the mighty Mother of the worlds
To make this earthly tenement her house.
As in a flash from a supernal light,
A living image of the original Power,
A face, a form came down into her heart
And made of it its temple and pure abode.
But when its feet had touched the quivering bloom,
A mighty movement rocked the inner space
As if a world were shaken and found its soul:
Out of the Inconscient’s soulless mindless night
A flaming Serpent rose released from sleep.
It rose billowing its coils and stood erect
And climbing mightily, stormily on its way
It touched her centres with its flaming mouth;
As if a fiery kiss had broken their sleep,
They bloomed and laughed surcharged with light and bliss.
Then at the crown it joined the Eternal’s space.

In the country of the lotus of the head
Which thinking mind has made its busy space,
In the castle of the lotus twixt the brows
Whence it shoots the arrows of its sight and will,
In the passage of the lotus of the throat
Where speech must rise and the expressing mind
And the heart’s impulse runs towards word and act,
A glad uplift and a new working came.
The immortal’s thoughts displaced our bounded view,
The immortal’s thoughts earth’s drab idea and sense;
All things now bore a deeper heavenlier sense.

A glad clear harmony marked their truth’s outline,
Reset the balance and measures of the world.
Each shape showed its occult design, unveiled
God’s meaning in it for which it was made
And the vivid splendour of his artist thought.
A channel of the mighty Mother’s choice,
The immortal’s will took into its calm control
Our blind or erring government of life;
A loose republic once of wants and needs,
Then bowed to the uncertain sovereign mind,
Life now obeyed to a diviner rule
And every act became an act of God.
In the kingdom of the lotus of the heart
Love chanting its pure hymeneal hymn
Made life and body mirrors of sacred joy
And all the emotions gave themselves to God.
In the navel lotus’ broad imperial range
Its proud ambitions and its master lusts
Were tamed into instruments of a great calm sway
To do a work of God on earthly soil.

In the narrow nether centre’s petty parts
Its childish game of daily dwarf desires
Was changed into a sweet and boisterous play,
A romp of little gods with life in Time.
In the deep place where once the Serpent slept,
There came a grip on Matter’s giant powers
For large utilities in life’s little space;
A firm ground was made for Heaven’s descending might.
Behind all reigned her sovereign deathless soul:
Casting aside its veil of Ignorance,
Allied to gods and cosmic beings and powers
It built the harmony of its human state;
Surrendered into the great World-Mother’s hands
Only she obeyed her sole supreme behest
In the enigma of the Inconscient’s world.

1. An important point to note here is that awakening of the kundalini is a hazardous journey and should not be done without the guidance of a living guru. Sri Aurobindo wrote in a letter to someone who has awakened his kundalini without a guru:

“No effort should be made to force the pace by concentrated meditation unless you have a guide whom you can trust – a clear guidance from within or a guide without.”

Secondly, the tantric way of awakening the kundalini from bottom up, is not the only approach to kundalini yoga. In the integral yoga of Sri Aurobindo, the approach is different. The seeker of integral yoga purifies his whole being by rejecting all that is contrary to the Divine, cultivates qualities which are in harmony with the divine nature and surrenders himself entirely to the Divine Power. If he puts into practice this discipline with sincerity and persistence, then the Divine Power takes care of the kundalini. As Sri Aurobindo explains the role of kundalini in integral yoga:

“In our yoga it is not necessary to go through the systematized method. It takes place spontaneously according to the need by the force of the aspiration. As soon as there is an opening the Divine Power descends and conducts the necessary working, does what is needed, each thing in its time and the yogic consciousness begins to be born in the sadhak.”