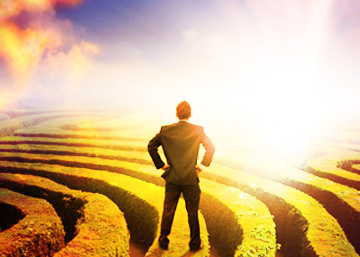 Faith is the soul’s witness to something not yet manifested, achieved or realized, but which yet the knower within us, even in the absence of all indications, feels to be true or supremely worth following or achieving.

The true faith is not mere belief but an intuition of our hidden and unmanifest potentialities and a firm, persistent will to realize it.

The nature of true faith; a corporate example; how to develop faith.

Shraddha: The Power of True Faith

Faith means what? The Sanskrit word for faith in the Indian spiritual tradition is Shraddha, which has a much deeper meaning than mere belief. In Katha Upanishad a profound Indian scripture, it is said, Nachiketha, a seeker of truth is “seized with faith” and with a self-confidence borne of faith says to his Guru, “I have faith. Now teach me the Truth,” which means faith makes him competent to know the highest Truth. Similarly, Bhagavat Gita, another Indian scripture states that whatever faith one has, that one becomes. What is precisely this Shraddha or faith, which is extolled so much in these Indian scriptures and considered as a force capable of great accomplishments. Obviously a mere belief or a mental conviction of the surface being cannot be a force of spiritual or secular realization. These beliefs and convictions of the surface mind are weak, uncertain and fickle. They are shattered to pieces when they are confronted with persistent oppositions or contradictions.

Shraddha or true faith has two aspects. At the cognitive level it is an intuition of our deeper self which perceives a hidden or unmanifest potentiality of our inner being or an unaccomplish possibility in the outer world, which has not yet become conscious knowledge or experience in the surface levels of our mind or an accomplished actuality in our external life. At the dynamic faculties of action, Shraddha expresses itself as a dynamic conviction in the will, which feels, “I can and I will do it.” Shraddha gives to the individual the ability to endure, persist and go through inspite of all difficulties, repeated failures and obstinate opposition or contradiction until what is perceived by faith is successfully accomplished.

Faith is normally associated with religious belief or the spiritual path. But faith as we have defined it, is not something which is confined to religion or spirituality; it is manifest in all-successful accomplishments in every field of human life, religious, spiritual or secular. All leaders of action who have achieved great and difficult things, against heavy odds possess this faith. As Sri Aurobindo points out: “All men of action, discoverers, inventors, creators of knowledge proceed by faith and, until the proof is made or the thing done, they go on in spite of disappointment, failure, disproof, denial because of something in them that tells them that this is the truth, the thing that must be followed and done.” For example, Lee Kuan Yen, a nation-builder, who built Singapore into a modern nation, said, “I am very determined, if I decide something is worth doing then I’ll put my heart and soul into it. The whole ground can be against, but if I know it is right, I will do it”. This is nothing but Faith.

So in order to comprehend how faith works in human accomplishments, we have to dissociate the concept and the word from religion and spirituality and understand its psychological basis.

In the corporate world an example of a dogged persistence, which comes from faith, is Herber Henry Dow, the founder of the multinational chemical firm Dow Chemical Company. When Herbert Dow was a teenager, he read about a crude incubator invented by an Australian for hatching ostrich eggs. Dow thought he could have the same idea to hatch chicken eggs. He tried and tried and failed repeatedly. But after 39 failed attempts, Dow finally succeeded in making the incubators.

Later, when Dow became an entrepreneur, he built his company into a multi-billion dollar enterprise, with the same persistence he displayed in making the egg-hatching machine. As Nathan Aazeng in his brief biographical profile of Down Jones, states:

“In the 1890s, most residents of Midland, Michigan, would not have believed the Dow Chemical Company would ever be successful. There was no hint that the company would one day do more than $11 billion worth of business in a single year. While setting up his business, Dow faced many discouraging obstacles. He had little money, few management skills, and partners who thwarted him at every step. Processes he used failed to work as expected, vats exploded for no apparent reason, and powerful foreign competitors started price wars. All of these problems, along with a business panic, hindered Crazy Dow’s efforts to build a money-making business. Yet somehow Dow survived the disastrous beginning and built his company into a successful member of the chemical industry. After his initial success in the business, Dow had continued to expand his operations. Some of his investments had failed miserably. When a bank failure sent the business community into a depression, Dow was hit hard. Although no one knew it at the time, Dow Chemical Company was broke. Before anyone noticed there was no money. But somehow Dow weathered the financial storm. Dow Chemical Company eventually grew into one of the largest chemical companies in the world.”

What is the source of this incredible persistence of Dow Jones against repeated failures, obstacles and bunglings? It is the intuition of the possibility and a conviction in the will that it can be done. In our perspective this intuition and will are the basis of faith.

How to develop this faith? The first step is to reject the opposites, which means reject all forms of self-doubt, depression, pessimism, cynicism, in our thoughts, feelings and will. The other part of the discipline is to make a conscious effort to shift our consciousness from the surface mind and learns to live more and more in our inner being which is the source of intuition and our greater potentialities. The third step is to cultivate a positive imagination made of hope, optimism, and a vision of a luminous and happy future. As Mother points out:

“…the more optimistic is your imagination, the greater the chance of realizing your aim… it is just an account of this very important truth that I am so tirelessly insistent in telling you to let anything happen, but for heavens sake, not to get depressed live rather in the constant hope and conviction that what we are doing will prove a success.”