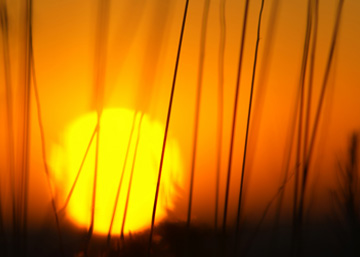 For a more authentic and effective environmental awareness, the scientific understanding of ecology has to be supplemented by a deeper and inner communion with nature. This article indicates some of the inner attitudes which can lead to such a communion with Nature.

I knew young people who had always lived in cities – in a city and in those little rooms one has in the big cities in which everyone is huddled. Now, they had come to spend their holidays in the countryside, in the south of France, and there the sun is hot, naturally not as here but all the same it is very hot (when we compare the sun of the Mediterranean coasts with that of Paris, for example, it truly makes a difference), and so, when they walked around the countryside the first few days they really began to get a terrible headache and to feel absolutely uneasy because of the sun; but they suddenly thought: “Why, if we make friends with the sun it won’t harm us any more!” And they began to make a kind of inner effort of friendship and trust in the sun, and when they were out in the sun, instead of trying to bend double and tell themselves, “Oh! how hot it is, how it burns!”, they said, “Oh, how full of force and joy and love the sun is!” etc., they opened themselves like this, and not only did they not suffer any longer but they felt so strong afterwards that they went round telling everyone who said “It is hot” – telling them “Do as we do, you will see how good it is.” And they could remain for hours in the full sun, bare-headed and without feeling any discomfort. It is the same principle.

It is the same principle. They linked themselves to the universal vital force which is in the sun and received this force which took away all that was unpleasant to them.

When one is in the countryside, when one walks under the trees and feels so close to Nature, to the trees, the sky, all the leaves, all the branches, all the herbs, when one feels a great friendship with these things and breathes that air which is so good, perfumed with all the plants, then one opens oneself, and by opening oneself communes with the universal forces. And for all things it is like that.