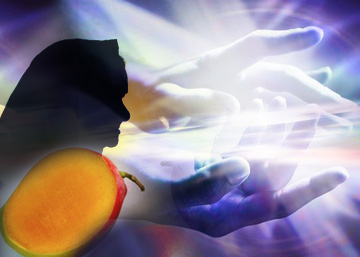 This story from the Indian sacred lore, told by the Mother to children, conveys that, in giving, what matters is the inner attitude and not the outer gift.

Mother you said, “Give all you are, all you have, nothing more is asked of you but also nothing less.” What is meant by “all you have” and “all you are”?

I am going to tell you in what circumstances I wrote this; that will make you understand:

Someone wrote to me saying that he was very unhappy, for he longed to have wonderful capacities to put at the disposal of the Divine, for the Realisation, for the Work; and that he also longed to have immense riches to be able to give them, to put them at the feet of the Divine for the Work. So I replied to him that he need not be unhappy, that each one is asked to give what he has, that is, all his possessions whatever they may be, and what he is, that is, all his potentialities – which corresponds to the consecration of one’s life and the giving of all one’s possessions – and that nothing more than this is asked. What you are, give that; what you have, give that, and your gift will be perfect; from the spiritual point of view it will be perfect. This does not depend upon the amount of wealth you have or the number of capacities in your nature; it depends upon the perfection of your gift, that is to say, on the totality of your gift. I remember having read, in a book of Indian legends, a story like this. There was a very poor, very old woman who had nothing, who was quite destitute, who lived in a miserable little hut, and who had been given a fruit. It was a mango. She had eaten half of it and kept the other half for the next day, because it was something so marvellous that she did not often happen to get it – a mango. And then, when night fell, someone knocked at the rickety door and asked for hospitality. And this someone came in and told her he wanted shelter and was hungry. So she said to him, “Well, I have no fire to warm you, I have no blanket to cover you, and I have half a mango left, that is all I have, if you want it; I have eaten half of it.” And it turned out that this someone was Shiva, and that she was filled with an inner glory, for she had made a perfect gift of herself and all she had.

I read that, I found it magnificent. Well, yes, this describes it vividly. It’s exactly that….

And the beauty of the story I told you – moreover, there are many others like it here – is just this, that when the old woman gave, she didn’t know that it was Shiva. She gave to the passing beggar, for the joy of doing good, of giving, not because he was a god and she hoped to have salvation or some knowledge in exchange.