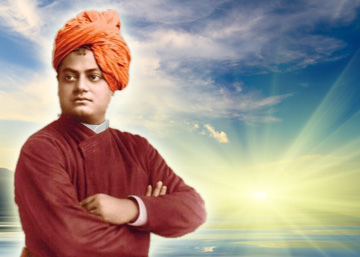 The more a man regards everything as divine… the more God will be pleased with him. To be sure this requires effort and love, a careful cultivation of the spiritual life and a watchful, honest, active oversight of all one’s mental attitudes towards things and people. It is not to be learned by world-flight, running away from things, turning solitary and going apart from the world. One must learn an inner solitude. He must learn to penetrate things and find God there, to get a strong impression of God fixed firmly on his mind.

Seeing the Divine in all and everywhere is a recognized meditative practice in most of the spiritual traditions of the world. Here is an inspired description of the discipline from a well-known spiritual teacher of modern India.

We read at the commencement of one of the oldest of the Upanishads, “Whatever exists in this universe is to be covered with the Lord.” We have to cover everything with the Lord Himself, not by a false sort of optimism, not by blinding our eyes to the evil, but by really seeing God in everything. Thus we have to give up the world, and when the world is given up, what remains? God. What is meant? You can have your wife; it does not mean that you are to abandon her, but that you are to see God in the wife. Give up your children; what does that mean? To turn them out of doors, as some human brutes do in every country? Certainly not. That is diabolism; it is not religion. But see God in your children. So, in everything. In life and in death, in happiness and in misery, the Lord is equally present. The whole world is full of the Lord. Open your eyes and see Him. This is what Vedanta teaches. Give up the world which you have conjectured, because your conjecture was based upon a very partial experience, upon very poor reasoning, and upon your own weakness. Give it up; the world we have been thinking of so long, the world to which we have been clinging so long, is a false world of our own creation. Give that up; open your eyes and see that as such it never existed; it was a dream, Maya. What existed was the Lord Himself. It is He who is in the child, in the wife, and in the husband; it is He who is in the good and in the bad; He is in the sin and in the sinner; He is in life and in death.

We all understand that desires are wrong, but what is meant by giving up desires? How could life go on? It would be the same suicidal advice, killing the desire and the man too. The solution is this. Not that you should not have property, not that you should not have things which are necessary and things which are even luxuries. Have all that you want, and more, only know the truth and realise it. Wealth does not belong to anybody. Have no idea of proprietorship, possessorship. You are nobody, nor am I, nor anyone else. All belongs to the Lord, because the opening verse told us to put the Lord in everything. God is in the wealth that you enjoy. He is in the desire that rises in your mind. He is in the things you buy to satisfy your desire; He is in your beautiful attire, in your beautiful ornaments. This is the line of thought. All will be metamorphosed as soon as you begin to see things in that light. If you put God in your every movement, in your conversation, in your form, in everything, the whole scene changes, and the world, instead of appearing as one of woe and misery, will become a heaven.

If we understand the giving up of the world in its old, crude sense, then it would come to this: that we must not work, that we must be idle, sitting like lumps of earth, neither thinking nor doing anything, but must become fatalists, driven about by every circumstance, ordered about by the laws of nature, drifting from place to place. That would be the result. But that is not what is meant. We must work.

So work, says the Vedanta, putting God in everything, and knowing Him to be in everything. Work incessantly, holding life as something deified, as God Himself, and knowing that this is all we have to do, this is all we should ask for. God is in everything, where else shall we go to find Him? He is already in every work, in every thought, in every feeling. Thus knowing, we must work – this is the only way, there is no other. Thus the effects of work will not bind us. We have seen how false desires are the cause of all the misery and evil we suffer, but when they are thus deified, purified, through God, they bring no evil, they bring no misery. Those who have not learnt this secret will have to live in a demoniacal world until they discover it. Many do not know what an infinite mine of bliss is in them, around them, everywhere; they have not yet discovered it.

It is thought which is the propelling force in us. Fill the mind with the highest thoughts, hear them day after day, think them month after month. Never mind failures; they are quite natural, they are the beauty of life, these failures. What would life be without them? It would not be worth having if it were not for struggles. Where would be the poetry of life? Never mind the struggles, the mistakes. I never heard a cow tell a lie, but it is only a cow – never a man. So never mind these failures, these little backslidings; hold the ideal a thousand times, and if you fail a thousand times, make the attempt once more. The ideal of man is to see God in everything. But if you cannot see Him in everything, see Him in one thing, in that thing which you like best, and then see Him in another. So on you can go. There is infinite life before the soul. Take your time and you will achieve your end.

This is another great theme of the Vedanta, this Oneness of life, this Oneness of everything. We shall see how it demonstrates that all our misery comes through ignorance, and this ignorance is the idea of manifoldness, this separation between man and man, between nation and nation, between earth and moon, between moon and sun. Out of this idea of separation between atom and atom comes all misery. But the Vedanta says this separation does not exist, it is not real. It is merely apparent, on the surface. In the heart of things there is Unity still. If you go below the surface, you find that Unity between man and man, between races and races, high and low, rich and poor, gods and men, and men and animals. If you go deep enough, all will be seen as only variations of the One, and he who has attained to this conception of Oneness has no more delusion. What can delude him? He knows the reality of everything, the secret of everything. Where is there any more misery for him? What does he desire? He has traced the reality of everything to the Lord, the Centre, the Unity of everything, and that is Eternal Existence, Eternal Knowledge, Eternal Bliss.