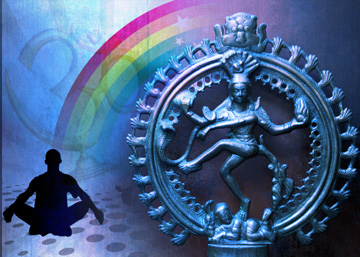 An ethical paradigm based on the principle that conduct must flow from within outwards.

Morality is for the Western mind mostly a thing of outward conduct; but conduct for the Indian mind is only one means of expression and sign of a soul-state. Hinduism only incidentally strings together a number of commandments for observance, a table of moral laws; more deeply it enjoins a spiritual or ethical purity of the mind with action as one outward index. It says strongly enough, almost too strongly, “Thou shouldst not kill,” but insists more firmly on the injunction, “Thou shalt not hate, thou shalt not yield to greed, anger or malice,” for these are the roots of killing. And Hinduism admits relative standards, a wisdom too hard for the European intelligence. Non-injuring is the very highest of its laws, ahimsa paramo dharmah; still it does not lay it down as a physical rule for the warrior, but insistently demands from him mercy, chivalry, respect for the non-belligerent, the weak, the unarmed, the vanquished, the prisoner, the wounded, the fugitive, and so escapes the unpracticality of a too absolutist rule for all life. A misunderstanding of this inwardness and this wise relativity is perhaps responsible for much misrepresentation. The Western ethicist likes to have a high standard as a counsel of perfection and is not too much concerned if it is honoured more by the breach than by the observance; Indian ethics puts up an equally high and often higher standard; but less concerned with high professions than with truth of life, it admits stages of progress and in the lower stages is satisfied if it can moralise as much as possible those who are not yet capable of the highest ethical concepts and practice.