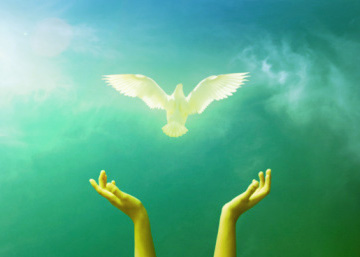 Can there be a higher level of action which is not driven by the motives of personal desire? We tend to think that when there are no desires all motives for action disappears. But the karma yoga of Gita provides way of action which transcends desire. This article spells out the basic principles of this higher order of action.

Beyond personal motives; beyond desires.

Men usually work and carry on their affairs from the ordinary motives of the vital being, need, desire of wealth or success or position or power or fame or the push to activity and the pleasure of manifesting their capacities, and they succeed or fail according to their capability, power of work and the good or bad fortune which is the result of their nature and their Karma. When one takes up the yoga and wishes to consecrate one’s life to the Divine, these ordinary motives of the vital being have no longer their full and free play; they have to be replaced by another, a mainly psychic and spiritual motive, which will enable the sadhak to work with the same force as before, no longer for himself, but for the Divine. If the ordinary vital motives or vital force can no longer act freely and yet are not replaced by something else, then the push or force put into the work may decline or the power to command success may no longer be there. For the sincere sadhak the difficulty can only be temporary; but he has to see the defect in his consciousness or his attitude and to remove it. Then the Divine Power itself will act through him and use his capacity and vital force for its ends.

But how then shall we continue to act at all? For ordinarily the human being acts because he has a desire or feels a mental, vital or physical want or need; he is driven by the necessities of the body, by the lust of riches, honours or fame, or by a craving for the personal satisfactions of the mind or the heart or a craving for power or pleasure. Or he is seized and pushed about by a moral need or, at least, the need or the desire of making his ideas or his ideals or his will or his party or his country or his gods prevail in the world. If none of these desires nor any other must be the spring of our action, it would seem as if all incentive or motive power had been removed and action itself must necessarily cease.

It is a common error to suppose that action is impossible or at least meaningless without desire. If desire ceases, we are told, action also must cease. But this, like other too simply comprehensive generalisations, is more attractive to the cutting and defining mind than true. The major part of the work done in the universe is accomplished without any interference of desire; it proceeds by the calm necessity and spontaneous law of Nature. Even man constantly does work of various kinds by a spontaneous impulse, intuition, instinct or acts in obedience to a natural necessity and law of forces without either mental planning or the urge of a conscious vital volition or emotional desire. Often enough his act is contrary to his intention or his desire; it proceeds out of him in subjection to a need or compulsion, in submission to an impulse, in obedience to a force in him that pushes for self-expression or in conscious pursuance of a higher principle. Desire is an additional lure to which Nature has given a great part in the life of animated beings in order to produce a certain kind of rajasic action necessary for her intermediate ends; but it is not her sole or even her chief engine. It has its great use while it endures: it helps us to rise out of inertia; it contradicts many tamasic forces which would otherwise inhibit action.

But the seeker who has advanced far on the way of works has passed beyond this intermediate stage in which desire is a helpful engine. Its push is no longer indispensable for his action, but is rather a terrible hindrance and source of stumbling, inefficiency and failure. Others are obliged to obey a personal choice or motive, but he has to learn to act with an impersonal or a universal mind or as a part or an instrument of an infinite Person. A calm indifference, a joyful impartiality or a blissful response to a divine Force, whatever its dictate, is the condition of his doing any effective work or undertaking any worth-while action. Not desire, not attachment must drive him, but a Will that stirs in a divine peace, a Knowledge that moves from the transcendent Light, a glad Impulse that is a force from the supreme Ananda.