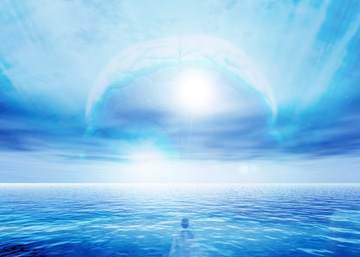 Our human mind is not the source of knowledge but only the instrument of knowledge. It cannot build knowledge, it can only reflect. That is why Patanjali calls for a discipline to quieten and establish a state of undisturbed calm in the mind so that it may reflect the Truth like the limpid and calm waters of a lake. For a radical spiritual transformation of the mind, it must learn to forsake its role of constructing knowledge. The usual activities of reasoning and formation of idea-constructs must be brought to a standstill. It is only when the mind halts its restless and incessant movements in ignorance that the higher faculties get a chance to enter into the mental being.

Intuition, for instance, is a power of Truth that begins to act when the mind falls into quiescence. No doubt it gets mixed up with the habitual activity of the reasoning mind, yet with vigilance and discrimination it is possible to be steadily open to the action of intuition. Once this is organised and stabilised, still higher faculties begin to make themselves felt. It is through the action of these higher faculties that the Truth can modify, change and transform the mind. The mind, by itself, cannot do that; but if it is quieted, then the higher action becomes possible.

Indeed the quality of the mind as it has developed makes a difference. If the mind is cultured and developed enough in the ways of the intellect, it provides a productive soil for the higher force to work upon. But if the mind is too much intellectualised and accustomed to function in its set grooves, it becomes an obstacle. If there is not this excessive, one-sided development, the mind provides the necessary opening for the play of new powers, e.g. poetry, painting etc.

The mind has to learn to give up its leading role. It has to open to the influence and action of the psychic or the spiritual consciousness and function as their instrument. That way lies its deliverance from its in-built limitations; it can develop into a channel for the manifestation and organisation of the higher Consciousness – its rightful role.