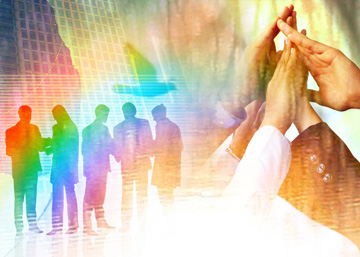 In a latest research on teamwork, Professors Woolley and Malone and their team gave subjects aged 18 to 60 standard intelligence tests and assigned them randomly to teams. Each team was asked to complete several tasks-including brainstorming, decision making, and visual puzzles-and to solve one complex problem. Teams were given intelligence scores based on their performance. Though the teams that had members with higher IQs didn’t earn much higher scores, those that had more women did. In an interview in Harvard Business Review, Wolley and Malone, summarizing briefly the implications of their research on how to make a team smarter, make the following points:

1. Families, companies and cities all have collective intelligence.

2. There is no direct, positive correlation between individual intelligence and collective intelligence. For example ten smartest people do not make the smartest groups and groups that had smart people dominating the conversation were not very intelligent groups.

3. Teams need an optimum level of cognitive diversity for effectiveness. Extreme uniformity or extreme diversity does not make the team more intelligent.

4. Great teams are not necessarily made of super smart people. The main ingredient of a good team are members listen to each other, share criticism constructively; have open minds; and not autocratic or dominating.

5. Gender diversity enhances the intelligence of the group which means there must be men and women, more women better, but not all women.

7. It is possible to markedly change groups intelligence, like for example, by providing more incentives for collaboration.

8. As the group grows bigger and the face-to-face interactions becomes less and less the collective intelligence tends to come down. However this negative trend can be neutralized or compensated by effective use of technology. For example, Wikipedia’s high quality product without any centralized control shows some of the potentialities of collective intelligence which can be harnessed by technology.(1)

Let us now examine in some detail the implications of this research study and its conclusions for enhancing collective intelligence of teams.

If we want to achieve a synergic resonance, we must make a conscious effort to create a mutually supportive, complementing and harmonious link between the members of the team. There are three principles which we have to keep in mind and incorporated in the group-dynamics of the team for enhancing the collective intelligence. They are:

There are many intelligences within us and IQ measures only one of them. This is now recognized in modern psychology. The eminent psychologists, Daniel Goleman who has conceived the concept of emotional intelligence and later multiple-intelligence has now one more new intelligence, “Social Intelligence.”

However, cognitive diversity alone is not sufficient for augmenting the collective intelligence of a group. A smart and intelligent person has a strong mental ego which tends to think that its own opinions and ideas are the highest and the best and look down upon others ideas, which are different or contrary to its own, as wrong, false or inferior. For example, Desecrates, a pioneer of modern science and arguably one the most brilliant minds of our age contemptuously dismissed all those who criticized his ideas with the remark: “Let the dogs bark.” So when the mental egos of smart people in a group remain unchecked, then cognitive diversity becomes a source of unending conflict. For enhancing the collective intelligence of a team the cognitive faculties of its individual members have to complement each others’. This requires a conscious cultivation of inner attitudes which minimizes ego-clashes and felicitates mutual understanding and collaboration. These attitudes may be expressed as the willingness to:

Share criticism and opposing viewpoints at the mental level without getting into emotional conflict in the heart.

Accept the validity of a different and opposite opinion.

Move from points of agreement to a consensus or a synthesis.

The third principle is to provide opportunities for the whole team to learn together. A very good example of team-learning is the “Leadership, Innovation, Growth,” programmes at the GEC’s Management Development Centre, Crotonville, New York.

Most of the traditional training is oriented towards the individual. Leaders and executives participate in the programme as individuals. But the disadvantage of this approach is that when the executive goes back to her company and tries to implement what she has learnt in the programme she may encounter resistance from the other members of her team because they have not learnt what she has learnt. LIG programme in GEC neutralises this shortcoming of the traditional approach by inviting the entire executive team in a division to participate in the programme. This helps immensely in arriving at a consensus of ideas and strategies among team members which in turn leads to a more effective implementation. As Steven Prokesh, a senior editor of Harvard Business Review sums up the team-centric approach of LIG:

“Management development programmes that focus on teaching and inspiring individuals to apply new approaches have a fundamental flaw. If other members of the team have not taken the course, they may resist efforts to change. The antidote to this problem is training intact management teams. When managers go through a program together they emerge with a consensus view of the opportunities and problems and how best to attack them.”

The LIG programme of GEC has two parts: first is a series of talk by in-house role models from GEC as well as outside academics from other institutions on topics like strategy, culture, capabilities, and marketing. Some of the talks may appear as elementary to a seasoned GEC professional working in that particular field. But it may open new way of looking or thinking to those who are from a different background. For example, a manufacturing executive who looks at everything in terms of productivity, cost, efficiency may learn some new lessons from a talk by a marketing expert on the need to look at things from a customer’s perspective.

The other part is collective debate and discussions. After the talk-session, executive teams retire into a separate room and have a “brutally frank and free-flowing” discussion, debate and conversation on the implications of what they have learnt for their businesses. At the end of the programme, the teams arrive at a consensus on future growth potentialities and how to achieve it. And finally, each team presents an action plan to the top management with a letter of commitment to CEO.(2)