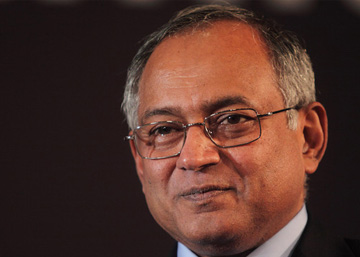 An Interview with Venu Srinivasan, CEO of Sundaram Clayton

This is second and concluding part of the interview, continuation of last issue.

What are the essential characteristics of the world-class company that Sundaram-Clayton would like to be?

There are 3 things that I would look for. One is customer satisfaction. If you are not customer-focussed, you cannot be world-class. I don’t know any company which ignores its customers and is still world-class. You have to think of the customer as God. The second factor is people. Without people, you cannot achieve anything. If your customers have to be happy, it is your people who have to make them feel that way. The third element is technology. Fundamental to any world-class company, of course, are management vision, goals, and values. It is these that ultimately drive TQC. Customer satisfaction, people development, technology development all these are driven because there is a top management that has vision, that has goals – including intermediate goals – and has values.

Any company which does not have values will not live long or make a mark in history. Companies without values are like footprints in the sand; they get washed away with the next wave. One of the reasons why we succeeded is that we are a values-driven company. We deeply believe in our values, and it is this conviction which gives you the strength to fight adversity. In 1991, when we had the labour conflict at TVS-Suzuki, there was a lot of vandalism. There was a lock-out in the company, and we were on the verge of ending up at the Board for Industrial & Finance Reconstruction. People said that we should open up and make peace with the trouble-makers. I said that I don’t mind if there is no capital left in the company, but I am not going to compromise with the way TVS manages its business, which is through good values and good industrial relations. And if there was going to be a group of vandals who wanted to wreck the company, we would rather close down than make peace. You cannot compromise on values and still attain long-term success.

How have you been able to create this sense of ownership? Is it your company’s people-orientation that is responsible for this ownership?

The elephant succeeds because it has a long trunk, right? If only one facet of quality could achieve business success, many more people would be successful. The real reason is; it is difficult to compete with TQC companies that have many facets where they are very good. And there are a few key areas where they are excellent.

So, you have to achieve that all-round level, and that is what quality and ownership is all about. It is true that we are people-oriented and that we spend a lot of time training our people, but that’s only one aspect. The technology, the manufacturing processes, the customer-orientation all are equally important.

Looking after people is fundamental because your suppliers are people, your employees are people, and your customers are people. If you don’t have a people-orientation, you’d better get out of business and do something else. There has been a tremendous amount of commitment from the top-starting from my grandfather, through my uncles, who had a single-minded vision of quality which was driven and handed down the generations that you stand for quality, that TVS stands for quality. It is this that has driven us to do this kind of thing.

How does it help to have a target like winning the Deming Prize when you are trying to galvanise an entire organisation?

In fact, that’s one of the questions that Professor Tsuda asked me. He wanted to know what value I thought the Deming Prize would add to Sundaram-Clayton. I told him that I thought that the Prize would tell our people that they have achieved something. And that sense of achievement is important because I know that while the company is continuously moving in the right direction, people need to know that; they need to take home that message. The Deming Prize has brought kudos to each employee who has put in 10 years of hard work. He can go back and tell his family: “You’ve been wondering why I’ve been away day and night working for the company, but now you know. We are a company of a different quality. We are up there. We are the elite.”

Is that why you are taking the president and general secretary, as well as the past three presidents of the Sundaram-Clayton workers’ union, along with you to Tokyo to receive the Deming Prize?

My father used to tell me: “You take care of your workers, and your workers will take care of you.” For the past 10 years, everybody has put in a lot of hard work. Without them, this wouldn’t have been possible. It’s a company-wide effort; it’s not just a management effort.

Deming Prize-winners often gun for the Japan Quality Award. Is Sundaram-Clayton going to aim for that next?

We may. But let me tell you something: winning awards is not our objective. The Deming Prize was not an objective, the Japan Quality Award is not an objective. I do not know whether we will apply for it nor am I saying that we will not apply. But the point is, the medals are not the goal.

The Japan Quality Award does not improve your profits; it is the processes that you put in place in the course of applying for it that make your company’s profitability, capability, market-share, and volumes grow. So, we must never lose sight of the real objective.

But in terms of recharging the organisation to catch the moving target of excellence that you spoke of, isn’t it important to set fresh goals?

Yes, a new goal like the Japan Quality Award is important. But once an organisation reaches a certain level of quality commitment, it then becomes an internally-fired thing. And Sundaram-Clayton, even without the Japan Quality Award target, will continue to move on the TQC front. It’s like the starter on a car: you need it to start the car, but you don’t need it once the engine is running. Similarly, the Deming Prize is a starter-mechanism – the ignition for the jet-plane.

Do you expect Sundaram-Clayton’s remarkable achievement to trigger off a new total quality revolution in corporate India?

I honestly don’t know. You can only deal with your microcosm. I am not a preacher, I am not a person who is going to create a quality wave in India. I have no such delusions. If everybody tried to improve the microcosm in which they operate, the country would be a better place.

But, obviously, you will spread the movement within your group.

Definitely. TVS-Suzuki has been practising it for the last 6 years, TVS Electronics has also been practising it for the same duration. We’ll all get there. Whether we get the Deming Prize today or tomorrow or don’t get it at all – is not the issue. They will all practice TQC in the same TVS Way; at least, the part of TVS that I manage. This is the way we have defined it.

How did Sundaram-Clayton manage to stay focused on TQC and the Deming Prize for as long as 10 years while companies around you chose other routes to quality?

That’s one of the reasons why we got out of the TQM movement of the Confederation of Indian Industry (CII) although we were one of its early members. They started going to the American Malcolm Baldridge Award and the European Federation of Quality Award – and they lost their way. For about 5 years, they did not know where they were going. Now, they have settled on the European Federation of Quality Model, and on Professor Tsuda as the counsellor for the Japanese model. It is only in the past year that we have started getting back to the CII movement since Professor Tsuda is also working with them. We have only one way. We have always stood for that. In fact, we have been faulted for being inward-looking, and not being part of the greater macrocosm of industrial society. But we are like that. If we believe in something, we continue to do that.