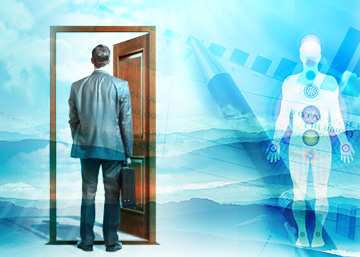 Exploring further the untapped potentialities of consciousness in the light of integral psychology.

As discussed in our previous article, what are the implications of this inner imperative for strategy. We have to explore blue oceans of consciousness, which remains untapped in human beings and in the world, or in other words we need a consciousness-approach to strategy. The blue-ocean strategies of the future has to explore the untapped potentialities in the human consciousness, which when expressed in the outer life will lead to the higher evolution of corporate life as a whole in terms of vision, values and well-being. In the market this higher evolution will express itself as products and services, which help in the fulfillments of these higher motives and values of human consciousness. To achieve this growth, first of all we have to take a psychological inventory of the corporate world. We have to identify what are the areas of consciousness or faculties which are already well-developed, other areas which are weak or stunted, partially developed or beginning to manifest; and finally those virgin realms of consciousness which remain untapped or in other words we have to map the blue-oceans of consciousness. To do this we must have some understanding of the inner anatomy of the human being.

In the perception of Integral Psychology a human organism is a four-fold being with a physical, vital, mental and spiritual dimension. The physical is the material envelop made of our body. The vital is the source of our sensations, emotions, desire, vital force, anima that animates our body and mind and the seat of the dynamic faculties of action and execution. The human mind in this integral perspective is the source of our intellectual, ethical and aesthetic being. The human mind may be broadly classified into three categories: first is the rational, conceptual and analytical mind which reasons, judges, discriminates and generates pure abstract ideas; second is the pragmatic mind with the urge or capacity for practical application of ideas; the third is the ideal, ethical and aesthetic intelligence with a sensitivity to higher values like truth, beauty, goodness, harmony, unity.

Beyond the body, vital and mind is the soul or the spiritual element in man, which is the deepest and innermost source of human individuality. The soul is the spiritual source of all higher values and is the seat of extra-mental faculties like intuition, inspiration and revelation.

In the past history of the race, the spiritual consciousness is the source of greatness and achievement in religion and spirituality and the subliminal is the source of excellence, achievement, greatness, success and high-performance in the secular life, in thought or action, science, poetry and literature, in the economic, social and political life. In general, all those who are above average or extraordinary receive their inspiration from these deeper layers of consciousness, mostly from the subliminal and sometimes from the spiritual. However, this distinction between the spiritual and secular is likely to disappear in the future.

As the psychological and spiritual evolution of humanity proceeds with an accelerated and diffused rapidity in the future, the subliminal and spiritual consciousness will express itself more and more in every activity of the secular life. Those individuals and communities who are able to do it consciously, with a clear understanding of the laws and process of these deeper and higher realms of consciousness, will be the leaders of the future.

This is, in brief, the anatomy of human consciousness and its total potentialities. Let us now examine how much of this totality of consciousness is manifest in the corporate world. The most well developed part of corporate consciousness is the pragmatic mind, vital force and its faculties of action and execution, with a great capacity for materializing an idea with the highest efficiency and productivity. The next comes the thinking mind of the business academia and the consultants with a considerable capacity for conceptual and analytical thinking, with an emphasis on the pragmatic implications of the idea for organizational effectiveness. The other major strengths of the corporate mind are its drive for innovation, change, continuous improvement, expansion, growth, and its global reach. All these factors give business an evolutionary advantage over other organs. In our modern age business is the most innovative, dynamic and progressive social organism, with a global mind-set and a capacity to think, act and implement on a global scale. As Peter Senge, the inventor of the concept of ‘learning organization’ points out:

“One thing in its favour is that the business organization has a greater capacity for innovation than does government – centrally more than do educational institutions… plus, of course, business is becoming increasingly global. So its scale is commensurate with the scale of really significant issues… For all these reasons, I think there is no institution in the world which has a better chance of developing and maintaining a global and systemic view than the corporation.”