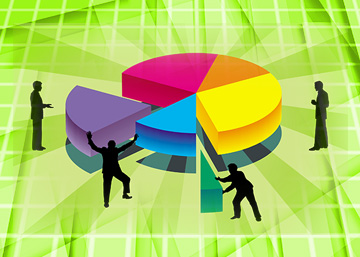 Constant emotional and mental conflicts among employees dissipates the energy of people and as a result affects teamwork, which is essential for sustained productivity in the contemporary corporate world.

This doesn’t mean conflicts have to be deliberately suppressed or discouraged. Conflicts are unavoidable in an environment of free and rich diversity, which can be a source of creativity and innovation. So modern management thinking is right in stressing the fact that conflicts are not always bad but they can also be creative. But in our integral perspective conflicts should neither be encouraged in the name of creativity nor suppressed in order to create a superficial and artificial harmony. The emphasis should be on a speedy and creative resolution or synthesis of conflicts as and when they arise in the process of free interaction between individuals and groups.

But in the corporate world harmonious relationship can’t be an end in itself; it must lead to effective teamwork.

Teamwork is becoming all the more important in the new and emerging management culture with its emphasis on minimum hierarchy, project-orientation and customer-focus and interdisciplinary work. However most of the corporate focus and academic studies on teamwork is performance-oriented with an emphasis on how to harness the knowledge, talent and skill of the team for achieving bottomline goals. This focus on performance is extremely important for business. But for a total self-actualisation of the human potential in a team there must be a greater attention to the social, psychological and spiritual dimensions of a human group.

The key to the full realization of the individual potential is professional liberty which empowers the individual to express his talent and capacities in a free and unfettered manner and contribute to the realization of organizational goal. The key to the realization of the collective potential lies in forging fraternity, which leads to inner and outer solidarity and harmony among people. In terms of performance this task of forging fraternity has two aspects or facets: first is to create a harmonious and complementing mutuality of knowledge, skill and competencies which leads to a resonance of collective energies of people; second is to create a dynamic whole of collective action which is more than the sum of individual action or contribution. And from a psychosocial perspective, creating fraternity means forging an inner and outer bonding among people, which is not dependent on professional relations in work or common corporate goals. The fraternity of high performance requires an understanding of the professional interdependence of people in their work-life and makes it more and more efficient, productive and effective. The other and deeper psychological fraternity requires an understanding of collective or communal psychology and apply this understanding to create an inner unity in the mind, heart and soul of people or in other words unity of consciousness.

In a predominantly performance oriented approach to team-building the central strategic aim is to channelise the knowledge, talents and skills of people in mutually complementing manner towards common goal. This approach makes no conscious effort to create a social and psychological unity or solidarity among team members. Whatever moral, psychological or social factors which emerge like trust or common goals are considered as secondary or necessary aids in serving the overriding goal of performance.

The factor of performance is undoubtedly important in business. But what is not recognized clearly is that a predominantly performance oriented approach limits the moral and psychological potential of the team; it cannot create entirely that whole which is greater than the sum of its parts because the entire creative energy of the collectivity is not fully engaged. To achieve this higher potential greater attention has to be bestowed in understanding, nurturing, deepening and strengthening the social, moral and psychological dimension of team building.