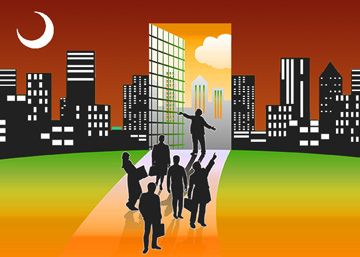 Our discussion so far is based on some enduring principles of execution. But we have to incorporate into it some of the realities of the new and future world. In the corporate world it is the reality of change.

These qualities have to be built into the strategic and operational systems. Strategy should not become a static document or a scripture; it should be a dynamic, flexible framework which is constantly reviewed and modified in response to the changing environment; it requires a more nimble organisational structure than the rigidly hierarchical traditional system. On the operational side, a new idea and practice which is gaining increasing recognition among progressive companies is the empowerment of the front-line worker or the team who are in direct contact with the customer and the environment. You can’t move with change, quick and nimble, if every decision has to move up and down the corporate hierarchy. Effective change-management requires full empowerment of the front-line team. They have to be provided with the freedom, autonomy, information, training and the skill to take the decision and the initiative to deal with the changing needs of the environment. We have already cited the example of Carl-Ritzon hotel, where the fully empowered self-managing front-line team manages customer service and relationship without any interference from the upper layers of management. However not all decisions can be taken by the front-line team. There are strategic decisions which can be taken only by top management. For such decisions, there must be effective systems by which facts and information regarding the customer needs and the changing environment are carried quickly to the top.

For bigger companies, the well-known change-management guru John P. Kotter offers a useful suggestion. In an article in Harvard Business Review, Kotter proposes a second operational system for managing rapid change, which runs parallel to the traditional system focused on standardized efficiency and productivity. This parallel operating system works in tandem with the traditional but without disrupting the latter. As Kotter explains:

“Although traditional hierarchies and processes – which together form a company’s “operating system” – are optimized for day-to-day business, they can’t handle the challenges of mounting complexity and rapid change. The solution is a second operating system, devoted to the design and implementation of strategy that uses an agile, network like structure and a very different set of processes. The new operating system continually assesses the business, the industry, and the organization, and reacts with greater agility, speed, and creativity than the existing one. It complements rather than overburdens the hierarchy, thus freeing the latter to do what it’s optimized to do. It actually makes enterprises easier to run and accelerates strategic change.”

The main instrument of the parallel operating system is a cross-functional team of volunteers drawn from the entire organisation, cutting across hierarchy and divisions. The team is authorized and empowered with sufficient autonomy and resources to focus on specific change initiatives and projects.