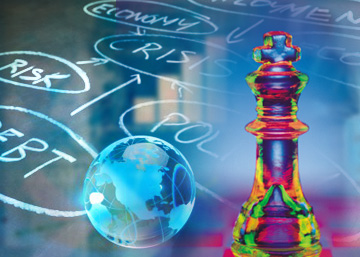 In global business, clear understanding of the social and political environment of a nation where business is done as an important success-factor. There are national environments which may offer commercial advantage but with a political risk. This article examines such a situation in the form of a case study and in the light of integral management.

Kavil Ramachandra, CEO of Amber software, braced himself for a heated debate in the board room, as he drove to his office in his black Mercedes. Amber software is a leading and reputed software company in India with a global presence. Ramachandra, 35, called as Ram in short, is one of the youngest CEO in India. Beginning his career as a trainee engineer in Amber, he rose fast to the top by his sheer performance and loyalty to the company. Today the main agenda for the board meeting is to discuss a business opportunity created by the decision of the Government of India to set up an IT park in Pakistan in Islamabad. The Government of India has asked the Indian IT industry to participate in the project and make it a success. The Minister of Industry of GOI has sent personal letters to the chairmen and CEOs of leading IT companies, including Amber, to help and participate in the project and the IT industry as a whole to participate in the project and make it a success. The aim of the project is to build an IT park with all the high tech facilities and infrastructure with the Indian assistance, along with an institute which provide high quality IT education and training to Pakistani students. The Pakistani government has responded with an unprecedented generosity. The Prime Minister of Pakistan has promised that his Government will reimburse half of the salary paid to Pakistani employees and provide free power supply to all the Indian firms which set up shop in the park. He has also assured complete security for the park and if the park management or firms want private security, Government of Pakistan will provide free grant. On the part of the Indian Government, the Finance Minister has directed all the nationalized banks to provide generous funds at low interest rates to all the firms which are willing to set up their units in the park.

Ram felt himself inadequate to arrive at such a politically loaded decision. He said to his boss, Rohit Mehta, Chairman of the Board of Amber and also some board members frankly that he needs their guidance and support to arrive at a decision. They appreciated his humility and frankness and told him that it can be discussed in the board and they can arrive at a collective decision.

In the board meeting Ram made a brief and crisp presentation of the nature and scope of the project and at the end appealed humbly to the board members to help him to arrive at the right decision with their guidance, experience and wisdom. The Chairman, Mehta said in a soft, affectionate tone: “We are here only for that Ram. It is the main function of a board.” Mehta initiated the discussion with the remark: “I am surprised at the generosity of the Pakistani government and their incentives” and turning to Ram, Mehta asked: “Do they really amount to something.” Ram replied:

“Not much. It looks impressive on paper but when we look closely it doesn’t lead to any substantial commercial advantage. In the beginning we may not be able to find many Pakistani employees with the right competence. So most of key-employees have to be our own Indian professionals, which means the half-salary incentive do not amount to much. Free power supply is a much more substantial incentive, but our industry is more people intensive than power intensive.” Nath Goenka, a board member and a veteran IT entrepreneur said, “Ram, you have to take the long-range view. You must keep in mind that a talented Indian IT professional may not be willing to work in the risky environment of Pakistan. If you force him to go, he may soon leave the company. If your unit in Islamabad has to succeed in the long-term it has to be staffed fully or mostly with Pakistani professionals. When you are able to do it, then the half-salary incentive provides a distinct cost advantage.”

“But Mr. Nath, do you think we can bet on the long-term in Pakistan” responded Naren Shah, a senior corporate lawyer, “It is an economically bankrupt and politically failing nation, where the long-term is dark and uncertain.” “I agree with you, Naren” said Rahul Singh another board member.

First of all, how can you rely on the promises of the Pakistani government? Even if we assume the present democratic government is honest in its commitments, anyday there can be a military coup and if the new military dictator is hostile to India, then the future of the project is at stake.” Nath Goenka interjected, “There is a valid point in what you are telling. But what I feel is that if the government and military establishment think, that the project can lead to economic development of the nation, the change of government may not effect much the project. But I agree that the political risk involved in doing business in Pakistan is considerable.” Naren Shah, raising the security issue, said, “There is the security and terrorist threat. Recently terrorist strike on the high-security military bases of Pakistan shows nothing can be safe from terrorist attack.”

After a few minutes of silence, Rohit Mehta said, “So, our discussion so far has thrown up many factors which are mostly unfavourable to the project. Is there a few favourable factors?” Gopalakrishnan, former chairman of one of the largest engineering and construction firms in India said, “There is one, provided we are able to somehow counteract the political risks. If Amber actively participates in the project by becoming a part of the project management team, then it gets some new experience and competencies which can be a plus point in bidding for similar projects in the future, especially in south East Asia and Africa.”

After a brief silence, Mehta again turned to Ram and asked, “does our young CEO have anything more to say.” Ram said with a certain intensity of feeling, “The Government of India views this project as a major, innovative CBM, Confidence Building Measures which can lead to better relationship between two neighbours and generate much goodwill among the people of Pakistan. It is a future hope and personally I share in this hope. If we can take this project with this hope and it succeeds in realising even a little bit of this hope, we will be contributing to the long-term well-being of the Nation and peace in this part of the world. As I said earlier, commercial advantage of the project for our company is minimal. But we may consider taking up the project as a contribution to the national cause.” Naren Shah who was sitting next to Ram, gave a friendly pat on his shoulders and said: “I appreciate very much your patriotic sentiment and youthful idealism. But in global business patriotism has a limited validity and idealism has to be tempered with pragmatism.”

The discussions in the board meeting of Amber makes it more or less clear that political risks involved in doing business in Pakistan is much greater than the commercial advantages offered by the concessions of the Pakistani government. However there is a valid point in Ram’s passionate concluding remarks on the project.

Geographical and political patriotism, as Naren Shah pointed out, may have a limited validity in global business. But contribution to the national cause based on the long-term well-being of the Nation has a value for the long-range well-being of the company. In the Indian perspective there is something like collective Karma. The eminent historian Arnold Toynbee, once said, growth and future of a Nation depend not on technology but on its karma. What is Karma? In simple term, Karma is a cosmic law which makes us responsible for our action. All actions that lead to the well-being and progress of people or the larger life brings good karma, which means accumulation of positive energies in the individual and the collectivity and a greater receptivity to the universal forces of Nature. Good karma in the long-term brings material, moral and spiritual well-being to the individual and the collectivity. On the other hand negative actions which harm people or life bring painful consequences.

So, if Amber participates in the project and viewing it as a contribution to the well-being of the nation and the continent, without bothering much about the commercial advantage, it forges a positive karma for the company, which will have its beneficial results for the company in the long-term. The political risk involved in it can perhaps be dealt with appropriate strategies like for example, employing private security, learning from foreign companies operating in Pakistan and if necessary, taking the help of consultants specializing in that domain. If the project succeeds there are also commercial advantages pointed out by R. Goenka and Gopalakrishnan.

In a deeper perspective, India and Pakistan are culturally one and if they have to fulfill their evolutionary destiny, they have to be one day politically united. All collaborative actions which help in this inner and outer unity of these nations will have the support of evolutionary Nature and bring positive karma to the groups who undertake such actions.