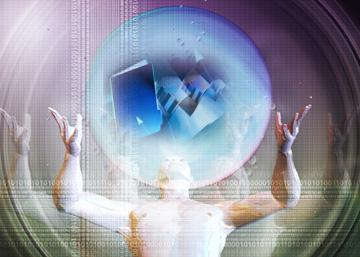 Earning money was essential but it was not the essence of life. Corporations have to create social capital, economic capital, spiritual capital and ecological capital. Companies that don’t create this kind of wealth would be dissolved or swept away.

The corporate world pursues mainly the economic bottom line. However with the advent of new values like corporate social responsibility and sustainability a new concept of “triple bottom line” is gaining increasing acceptance among corporate leaders. This concept adds the social and environmental factors to the economic bottom line. But even this broader idea is not sufficient for the future because it ignores the crucial “people-factor” and lacks insight into the deeper evolutionary imperatives of the emerging world.

The corporate strategies focusing exclusively on profitability may not be sufficient for the future. But wealth-creation is the most basic and fundamental dharma of business. A business organization, which doesn’t create wealth for the society, is adharmic, unethical. However for a more sustained effectiveness in this domain we have to go beyond or rather get behind the conventional economic parameters like profit-maximization. We have to focus more on the causative factors which lead to these economic goals like for example, Technology, Productivity, Quality, Customer-Service, Innovation or Knowledge. These are the key-factors of the Economic Bottom line.

Next comes the Human Bottom-line. The Key Result Areas in this domain are those factors, which lead to a better quality of the work force like Leadership, Teamwork, Motivation, Creativity, Ethics, Values and Wellness. The third imperative is the Social Bottom-line. An organization is an integral part of the larger social environment. In the long-term, well-being of the organization depends on the well being of the society. This is the rationale behind the concept of Corporate Social Responsibility (CSR), which is gaining increasing acceptance among corporate leaders. However, here also the concept and practice of CSR has to progress beyond isolated charitable projects to embrace the community as a whole.

There is a concentration of resources, knowledge, competence and skill in a business organization, which it has to share with the community of which it is a part. Among business leaders, J.R.D. Tata had a clear perception of this responsibility and also the potentiality of business for community development. He said, “Every company has a special continuing responsibility towards the people of the area in which it is located. The company should spare its engineers, doctors, managers to advise the people of the villages and supervise new developments undertaken by cooperative effort between them and the company.” We must note here that JRD’s conception of corporate responsibility goes far beyond charity or sharing of wealth towards sharing of capabilities.

The fourth is the Environmental Bottom-line. We are not only part of society but also part of Nature. Any human group, which draws energy and resources from Nature, has a responsibility to use them prudently within the laws and limits set by Nature. Here again as with CSR, the highest aim of ecological responsibility is to harmonise the communal life of the group (especially the economic and material life) and the resource-energy management strategies, with the laws of Nature and the natural environment. However, for long-term effectiveness, social and ecological bottom lines should not remain as mere decorative, idealistic, showy “projects” at the fringe of the corporate life. They have to become part of the core strategy of the organization.

Beyond the four there is a fifth, the Evolutionary Bottom-line. This is something, which has not been recognized in the corporate world.

We humans, as a species, are an unfinished project. We have not yet realized all our potentialities hidden within us, especially in the moral, psychological and spiritual realms of our consciousness. We have to progress or evolve further to reach our highest potential as human being. The work and life of the modern corporate world provides a rich field of experience not only for professional growth but also for evolution of the individual. For someone who is seeking for moral and spiritual development, the corporate world provides a more effective field of experience for accelerated inner growth than an isolated ashram, monastery or forest. The problems, difficulties, challenges, temptation and conflicts of the corporate world, are a fertile arena for becoming fully conscious of our weaknesses and strengths and also for expressing our inner potentialities. Secondly, the modern corporate experiences provide the right anvil for testing the quality and genuineness of our inner growth.

But a corporate leader or manager may ask: how can this be called a bottom-line? Why should a business organization bother about the personal growth of the employees, which is his personal business? There are two reasons why. The first reason is that personal growth will have its ultimate impact on the four bottom lines, which we have discussed earlier. Most of the moral and spiritual disciplines can also make the employee a better professional; for example the discipline of inner peace, equanimity and loving kindness to all which are common disciplines in all eastern spiritual traditions can lead to greater clarity in thought, better judgement, more effective decision-making, less stress and a more harmonious interpersonal relationship or team-work. Similarly the spiritual discipline of karma yoga can lead to a greater efficiency, creativity and skill in action. The second reason is that prophetic insights of seers have perceived this inner growth in the moral psychological and spiritual realms as the next step in human evolution and whichever group takes up this higher evolution as a part of its vision and strategy will be among the leaders of the future. As Sri Aurobindo points out: “In the next stage of human progress it is not a material but a spiritual, moral and psychical progress that has to be made” and therefore “whatever race or country seizes on the lines of that new evolution and fulfills it will be the leader of humanity.”

These are the five bottom lines of the future. For an effective and successful evolution in the future world every organization has to strive for a progressive and sustained learning and excellence in all the five simultaneously. In the short-term, a temporary focus on some specific bottom lines may be needed depending on the evolutionary status of the organization. For example, a start-up operating in a fierce competitive environment may have to focus mainly on its economic and human bottom line. On the other hand an organization, which has achieved a certain amount of mastery in the economic and human bottomline, can give a greater attention to the other three bottom lines.