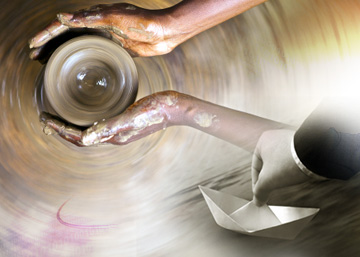 Retaining existing or manifest talent is only one aspect of talent management. The other aspect is harnessing the hidden or unmanifest talent.

Retaining and harnessing talent will be the most decisive factor that will determine the success and effectiveness of organisation in the future. Most of the present discussions and debates on talent management are focused on retaining existing or manifest talent like for example, the highly sought-after and talented manager or technocrat or star-performer who contributes substantially to the company’s bottomline. But in an integral perspective this is only one aspects of talent management. The other aspect is how to manifest the hidden talent in the average employee or under-performer.

The traditional hard-core management is not interested in this second aspect of talent management; it is regarded as the unproductive and wasteful part which has to be got rid of by downsizing. For example in Jack Welch’s approach to people or talent management in GEC, the work-force in the organisation is classified into three categories based on performance: top, middle and the low. The top bracket employees or executives are pampered with a fast-track career path and other monetary and non-monetary rewards. The middle category people are asked or rather pressurized to improve and catch up with the top. The low-performers are simply asked to leave the organisation or fired.(1) Most of the organisations in the West follow this model in some form or other. And many managers regard this model as the best and the most effective for keeping the organisations “lean and mean.” But this is an opinion which may not be entirely true.

There can be other models of talent-management. Not all organisations follow this model. For example, the well-known Japanese automobile manufactures, Toyota Motor Corporation, which is as great, innovative, productive and profitable as GEC, follows a very different model which is less mean and more humane. In Toyota high-performers are rewarded but not pampered, and under-performer are not fired but helped to improve their performance. As Hirotaka Takeuchi and his co-authors state in an article on Toyota in Harvard Business Review: “Many companies either promote employees or ask them to leave, up-or-out as the practice is called, Toyota rarely weeds out under-performers, focusing instead on upgrading their capabilities,” which the Japanese scholars call as the in-and-up approach.(2)

Interestingly Jack Welch, the champion practitioner of the up-or-out approach, admits that those who are asked to leave because of their low-performance are not always or necessarily mediocre people. They may have other kinds of talent or capacities which do not fit in with the culture of GEC. They may perhaps shine or excel in a culture which is different from that of GEC. (3) Thus, the Toyota’s in-and-up approach and Jack Welch’s patronizing views on under-performers, indicate that there can be a different approach to talent management where not only the manifest talent in the high-performance employee is cherished but also the unmanifest talent in the under-performer is helped to come forward and enrich the organization.