Fourth Dimension Inc. > Society and Culture > Business and the Problem of Poverty 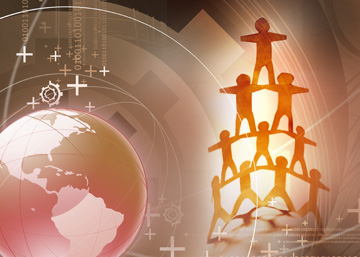 One of the promising trends emerging in management thought and practice is the turning of the corporate mind towards the poor and the problem of poverty. It is a significant event because it is a turning of the most powerful, influential and innovative organ of our modern age, which creates wealth for the society, towards one of the most challenging problems of humanity involving distribution of wealth. This article examines this new trend and its possibilities and limitations in the light of a deeper and broader perspective.

Businesses at the service of poor; fighting poverty with profit; moral imperative.

Businesses at the Service of the Poor

Poverty and Inequality is undoubtedly one of the most challenging problems of our modern age. According to some statistics, there are four billion poor people in the world living with income less than 700 US Dollars per year. On the other hand, at the top of the income scale are a few million rich with an income of more than 20000 US Dollars per year.

At present, the battle against poverty was fought mainly by three categories of players. First is the national or regional governments and the government institutions. Second charitable organizations and donor agencies like the Rockfeller Foundation or the World Bank; third is the NGOs and social reformers like the SEWA in India. Most of the government programmes on poverty alleviation in Asia and Africa are dismal failures. NGOs and charitable organization are able to achieve better results in the poverty front because of a greater moral commitment and a more focused approach to the problem.

However poverty-eradication requires one more factor: expertise or competence in creating wealth. We cannot hope to solve the problem of poverty without building the capacity to create and distribute wealth in the poor. And who else is better equipped to do this task than business, the natural creator of wealth for the society? Here comes the importance of involving business in the task of eradicating poverty. Let us now examine some of the innovative ideas emerging in the corporate mind for tackling the problem of poverty.

Until now, business, especially big business, showed very little active interest in the problem of poverty except pouring some money in the form of charity. This is because Captains of Business thought that they can gain nothing by serving the poor. The main purpose and process of business is to create wealth by selling their product and services to the customer with a profit. And there is neither wealth nor profit in catering to the poor. This may sound obvious and perfect common sense or business sense.

But the essence of creativity is an uncommon sense which distrusts the obvious and can look behind or beyond it. The distinguished management thinker, G.K. Prahalad, displays such an uncommon sense when he argues, turning common sense upside down, that in the future there is more profit in selling to the poor than to the rich. The well-known management guru in his book on “Eradicating Poverty through Profit” counsels big business to turn their attention to the poor, not for any charitable or moral reasons but because the poor of the world at the bottom of the income pyramid represent a sizeable and profitable market. The author of the book images the consumer population in the form of a pyramid with the small minority of the rich at the narrow tip in top and the vast population of the poor in billions at the bottom of the pyramid which he calls as the BOP Segment. “The real source of market promise” declares Prahalad, “is not the wealthy few in the developing word or even the emerging middle income consumer. It is the billions of aspiring poor who are joining the market economy for the first time.”

There are also other market-oriented approaches to poverty-eradication. I will not enter into a debate on the pros and cons of this profit-oriented approach to poverty. But the question is, can a complex and difficult effort like poverty-alleviation be sustained without a firm moral commitment? If due to some changed circumstances or difficulties in the business environment, the BOP segment becomes unprofitable, then the worthy idea and the project have to be shelved by business?

There are three reasons why Business has to take up the project of poverty eradication as its moral mission and not merely as a business proposition. First reason is that purely economic motives and aims do not have much creative and motivational force. They may lead to some immediately effective and pragmatic innovations but do not give the inner strength and force to realize great ideals or solve global problems like poverty. Only a moral and spiritual dedication to an ideal that transcends the economic, social and political self-interests of the individual and the group can release such a higher creative energy. This motivational potential of a moral cause and long-term vision is now recognized in business. As James S. Burke a former CEO of Johnson and Johnson points out:

“Here we believe strongly in three things, decentralization, managing the long-term and the ethical principles embodied in the credo. Credo is the sort of things that inspires the best in people. I think that all of us have a basic moral imperative hidden somewhere in us. In some people it is more central to their being, but it’s always there. To that well-spring creates energy that you can’t get anywhere.”

The second factor is the rationale behind the concept of corporate social responsibility. An institution which creates wealth has a moral responsibility to ensure that the wealth it creates is equitably distributed in the society. The third factor is civilisational. The eminent historian Arnold Toynbee perceived that every human civilization is presented by Nature with certain challenges and the future of the civilization depends on how it tackles these challenges. Poverty and inequality is perhaps one of the challenges thrown by Nature to our modern civilization. Here again business has a moral responsibility to take up the challenge not only because the problem or challenge is closely related the social function of business as the creator of wealth, but also because business is better equipped than other social organs in terms of resources and skill for dealing with the problem.

So global business has to consider poverty-eradication as its global responsibility to humanity, commit itself to the task with or without profit and persist in it inspite of temporary difficulties and failures. The corporate world of business as a whole should have a long term moral and spiritual vision for creating a beautiful, harmonious and equitable economic order, in which poverty is eliminated at its roots. Every business organization, individually or in collaboration with other organizations, each one according to their capacity, can contribute something to the progressive realization of this vision. Smaller organizations can work at the level of the local community in which they function and the bigger organization can contribute at the national and global level. For example, global business may create a global framework for promoting creative research and thinking on all problems and issues related to poverty and creation or distribution of wealth among the poor.

We must note here that such a selfless dedication to an idea or activity, which contributes to the common good, progress or well-being of the collectivity or humanity never goes unrewarded by Nature. It creates a positive Karma for the organization and also expands the consciousness of the group, which brings in higher creative energies of universal Nature. This in turn leads to the moral as well as material progress of the organization. For a mental, moral or spiritual idea lived in action, releases a corresponding mental, moral or spiritual force, which ultimately produces material results. This is an Indian insight, which has empirical support. James S. Burke, former CEO of Johnson & Johnson undertook a study to understand the impact of social responsibility practices on the bottom-line. Burke and his staff examined 26 companies that had a written codified set of principles stating that public service was central to their being. On the results of the study, Burke states:

“Results were eye-opening, though all along I suspected how it could come out. What we found was that those companies with a written commitment to social responsibility recorded an average of 10.7% growth in profit compounded over 30 years. What this study says is that companies that have a commitment and know what they believe in will overtime outperform those which do not.”

The other limitation of the Prahalad’s model is the narrow and limited view of the poor as a consumer of goods and services. Poverty alleviation is viewed in terms of enhancing the “consuming capacity” of the poor and make them consume more and more of the goods and services offered by business. The goal or ideal to be achieved is to uplift the economic condition of the BOP population from the status of the poor to that of the middle class. This approach, as the many examples given in the book by Prahalad indicate, might have benefited the poor. But a broader vision of the development process and its beneficiaries, in which poverty alleviation and profit come as natural by-products of greater aims of development, may perhaps yield better and more qualitatively superior results.