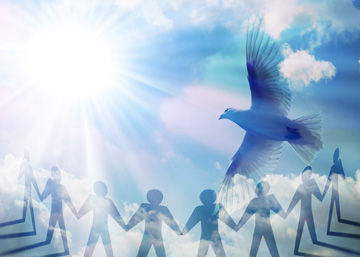 Liberty is the foundation of all progress. Without freedom, inner and outer, there is no authentic progress. But individual liberty has to be guided, restrained and enlightened by higher values that leads to the progress and well-being of the community.

Liberty and the Higher Laws of Nature

The French Revolution had given us the ideal of individual Liberty. The ancient social thought laid a predominant emphasis on collectivity or communal liberty. The individual is considered mainly as a social man with a social function with a strong stress on duties rather than on rights. The main advantage of this conception is that it restrains the selfishness and greed of the human ego and forces it to look upon itself as a part of the community. But the disadvantage of this ancient idea is that the development and potentialities of the individual in the society is confined to the social type and function. But the individual is not merely the social animal. Society and social function is only a framework and means for the free and full development of the total potentialities of the human being in all the levels – physical, psychological and spiritual. This requires individual freedom, inner and outer, freedom of thought, speech, action and expression and to experiment, innovate, initiate and learn by making mistakes and by trial and error.

But this is the freedom to do, or in other words the process of liberty. We must also know freedom for what and to what ends. If it is exclusively for the self-aggrandizement and expansion or happiness of the individual and communal ego at the expense of the well-being and happiness of other individuals or collectivities, it will not lead to any sustainable development. In an ecological perspective the only freedom which leads to sustainable growth is that which comes from obedience to the higher laws of Nature, which govern the higher evolution of humanity and earth towards their integral spiritual destiny.

This obedience to the higher laws of Nature may bring certain masteries permitted by Nature or in other words Nature may delegate some of her own knowledge, powers and masteries to man. If these delegated powers are used in the way which Nature wants us to use it, within the laws and limits set by her, then it is beneficial to our higher evolution. Thus we can see obedience to Nature and mastery over the forces of Nature are not incompatible attitudes, if our masteries are within the laws and limits of Nature.

What are these highest laws? In our integral perspective, they are the laws of integral Unity of Man and Nature in all the dimension of human existence: physical, psychological and spiritual. An indivisible Oneness of timeless and spaceless being expressing itself in Time and Space through an interdependent, interlinked and interacting Unity of Energies of Nature – physical, vital, mental and spiritual – is the highest and integral truth and law of life. The terrestrial life, human and non-human, is an inseparable part of this Web of Unity of Nature and Spirit.

Both the ancient spiritual traditions and the modern science of ecology agree that our human and terrestrial life is an interconnected and interdependent diversity held together by an underlying unity. As Sri Aurobindo describes “All by spiritual links were joined to all and bound dissolubly to the One.” This is the spiritual basis of the third value of the French trinity, Fraternity, which holds the key to the synthesis of the triple values of French Revolution. If this is accepted as the highest law of our being and life, then we have to keep this supreme law engraved in our mind while exercising our individual freedom and also in organising this freedom in our collective life. This means all activities which lead to the conscious awakening and actualization of this highest law have to be given the highest freedom, opportunities, incentives for flowering and growth. On the other hand, activities which are hostile or opposed to this higher awakening should not be given any freedom to act and have to be firmly dealt with by the dictates of law and the power of enforcement.

Other movements or activities which hamper or obstruct this higher awakening out of ignorance, inertia or self-interest have to be educated, enlightened, persuaded, cajoled, disciplined and oriented towards this higher awakening and discouraged through appropriate disincentives from pursuing their obstructive or stagnant attitude.

So the highest form or use of liberty is the liberty to grow inwardly and outwardly towards the inner and outer fraternity of all creation. We can use our liberty safely and beneficially only when we become more and more conscious of our fraternity with all creation. The amount of liberty which we deserve is in direct proportion to the extent to which we are conscious of this all-embracing fraternity of Nature or Spirit.

The other aspect of liberty is the freedom to grow towards our highest potential in all the levels of our being – physical, vital, mental, ethical, aesthetic and spiritual – and express them in the outer life for the well-being, enrichment and transformation of the larger environment of which we are part. This is the task of Education. However this integral education through free progress should not be confined to the school or the university but has to extend itself into the family, work-life, and the community so that the whole of our life becomes a free growth towards our highest and integral potential and their progressive self-expression in life.

Among some of the latest trends in development thought, the Nobel Laureate in economics, Amartya Sen’s concept of development as freedom provides a useful conceptual framework for thinking further. Sen highlights seven basic freedoms which are essential for sustainable human development: freedom from discrimination, freedom from want, freedom to develop and realise one’s human potential, freedom from fear, freedom from injustice; freedom of thought and speech and the freedom to get decent work.

We may add one more freedom, freedom from greed, violence against people or Nature in the form of inflicting injury, exploitation, or war and excessive selfishness. Most of the eastern spiritual traditions and teachings consider ego and desire as the source of all evil and misery in the world, and freedom from ego and desire as the ultimate solution to all problems and the path to highest freedom. But for most of us who belong to the average humanity this is a far-off spiritual ideal which cannot be realised in the near future. However, freedom from greed, violence and excessive selfishness is a more realizable ideal. We must note here that these negative psychological factors which are part of the lower nature in man, are some of the major inner causes behind injustice and inequality in human society. So freedom from injustice which Sen lists as one of the seven freedoms cannot be realised fully without a minimum of psychological freedom from the negative and grosser impulse of the lower nature in man like greed and violence and overwhelming self-interest.

When we have attained this minimum level of psychological freedom, then we can progress towards the next higher level of freedom, which is freedom from attachment. This emotional and mental attachment to things, people and fixed ideas, dogmas and feelings, is a form of psychological bondage which locks up much of our creative energies and prevents us from progressing towards deeper, higher, finer and broader or more inclusive concepts, ideals and emotions. This attachment can also cause much harm and create social toxins like terrorism. One of the major causes of the spectre of religious terrorism haunting our life today is the attachment to fixed and narrow religious ideologies.

One thought on “Dimensions of Liberty”