Fourth Dimension Inc. > Society and Culture > IT and the Destiny of Matter 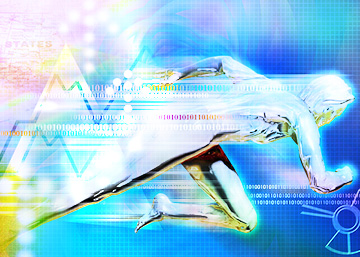 According to Sri Aurobindo and the Mother, matter has a spiritual destiny. This article examines the role of IT in the destiny of matter.

When we look at the evolution of IT with a discerning eye, we will see that it is a movement towards creating an intelligent material environment responsive to the consciousness of man. According to some IT prophets, in the future, every material object or gadget from doors and windows in our home or electric shavers to the automobile will have a microchip, which is a tiny electronic brain, that will monitor and control that object or gadget according to our needs, tastes and requirements; and all these tiny electronic brains will be connected through TV and the Internet into some sort of a global electronic brain. And again, when we examine the evolution of Computer Technology, we will see that it is a movement towards replicating human consciousness and its faculties in a Machine, which means in Matter. This movement at present has given birth to a new field in computer science called “Artificial Intelligence” or AI in short. The aim of AI is to simulate or replicate human consciousness and its faculties in a machine. According to some computer experts, the computers of the future will be able to think, feel, sense, speak, communicate and interact with man.

What is the hidden significance of this evolution of IT? When we examine the evolutionary process of Nature, we will find that consciousness (in whatever degree or level) begins to manifest in matter when the material organism acquires a certain complexity and appropriate instruments to manifest a given level of consciousness. We can see a similar pattern in the evolution of IT.

Thus, there is still higher planetary destiny beyond human unity. It is the Unity of Conscious Matter, which becomes flexible, responsive and receptive to the consciousness of the Spirit of Man, And IT has perhaps a role to play in preparing the material life for this higher destiny.