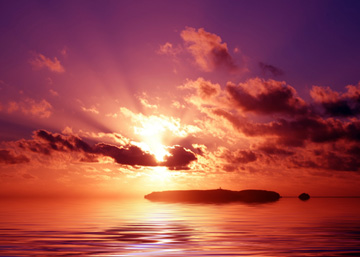 Yoga is not something away from life. Yoga is the science or process by which our spiritual evolution can be accelerated in and through life.

All Life is Yoga

In the right view both of life and of Yoga all life is either consciously or subconsciously a Yoga. For we mean by this term a methodised effort towards self-perfection by the expression of the secret potentialities latent in the being and – highest condition of victory in that effort – a union of the human individual with the universal and transcendent Existence we see partially expressed in man and in the Cosmos. But all life, when we look behind its appearances, is a vast Yoga of Nature who attempts in the conscious and the subconscious to realise her perfection in an ever-increasing expression of her yet unrealised potentialities and to unite herself with her own divine reality…. Yoga, as Swami Vivekananda has said, may be regarded as a means of compressing one’s evolution into a single life or a few years or even a few months of bodily existence.

In fact, when a man turns his vision and energy inward and enters on the path of Yoga, he is popularly supposed to be lost inevitably to the great stream of our collective existence and the secular effort of humanity. So strongly has the idea prevailed, so much has it been emphasised by prevalent philosophies and religions that to escape from life is now commonly considered as not only the necessary condition, but the general object of Yoga. No synthesis of Yoga can be satisfying which does not, in its aim, reunite God and Nature in a liberated and perfected human life or, in its method, not only permit but favour the harmony of our inner and outer activities and experiences in the divine consummation of both…. The true and full object and utility of Yoga can only be accomplished when the conscious Yoga in man becomes, like the subconscious Yoga in Nature, outwardly conterminous with life itself and we can once more, looking out both on the path and the achievement, say in a more perfect and luminous sense: “All life is Yoga.”

The Evolutionary Aim of Yoga

Life, not a remote silent or high-uplifted ecstatic Beyond-Life alone, is the field of our Yoga. The transformation of our superficial, narrow and fragmentary human way of thinking, seeing, feeling and being into a deep and wide spiritual consciousness and an integrated inner and outer existence and of our ordinary human living into the divine way of life must be its central purpose.

The life of the human creature, as it is ordinarily lived, is composed of a half-fixed, half-fluid mass of very imperfectly ruled thoughts, perceptions, sensations, emotions, desires, enjoyments, acts, mostly customary and self-repeating, in part only dynamic and self-developing, but all centred around a superficial ego. The sum of movement of these activities eventuates in an internal growth which is partly visible and operative in this life, partly a seed of progress in lives hereafter. This growth of the conscious being, an expansion, an increasing self-expression, a more and more harmonised development of his constituent members is the whole meaning and all the pith of human existence. It is for this meaningful development of consciousness by thought, will, emotion, desire, action and experience, leading in the end to a supreme divine self-discovery, that Man, the mental being, has entered into the material body. All the rest is either auxiliary and subordinate or accidental and otiose; that only matters which sustains and helps the evolution of his nature and the growth or rather the progressive unfolding and discovery of his self and spirit.

The aim set before our Yoga is nothing less than to hasten this supreme object of our existence here. Its process leaves behind the ordinary tardy method of slow and confused growth through the evolution of Nature. For the natural evolution is at its best an uncertain growth under cover, partly by the pressure of the environment, partly by a groping education and an ill-lighted purposeful effort, an only partially illumined and half-automatic use of opportunities with many blunders and lapses and relapses; a great portion of it is made up of apparent accidents and circumstances and vicissitudes, – though veiling a secret divine intervention and guidance. In Yoga we replace this confused crooked crab-motion by a rapid, conscious and self-directed evolution which is planned to carry us, as far as can be, in a straight line towards the goal set before us.

In a certain sense it may be an error to speak of a goal anywhere in a progression which may well be infinite. Still we can conceive of an immediate goal, an ulterior objective beyond our present achievement towards which the soul in man can aspire. There lies before him the possibility of a new birth; there can be an ascent into a higher and wider plane of being and its descent to transform his members.

An enlarged and illumined consciousness is possible that shall make of him a liberated spirit and a perfected force – and, if spread beyond the individual, it might even constitute a divine humanity or else a new, a supramental and therefore a superhuman race. It is this new birth that we make our aim: a growth into a divine consciousness is the whole meaning of our Yoga, an integral conversion to divinity not only of the soul but of all the parts of our nature.

Yogic methods have something of the same relation to the customary psychological workings of man as has the scientific handling of the force of electricity or of steam to their normal operations in Nature. And they, too, like the operations of Science, are formed upon a knowledge developed and confirmed by regular experiment, practical analysis and constant result. All Rajayoga, for instance, depends on this perception and experience that our inner elements, combinations, functions, forces, can be separated or dissolved, can be new-combined and set to novel and formerly impossible workings or can be transformed and resolved into a new general synthesis by fixed internal processes. Hathayoga similarly depends on this perception and experience that the vital forces and functions to which our life is normally subjected and whose ordinary operations seem set and indispensable, can be mastered and the operations changed or suspended with results that would otherwise be impossible and that seem miraculous to those who have not seized the rationale of their process. And if in some other of its forms this character of Yoga is less apparent, because they are more intuitive and less mechanical, nearer, like the Yoga of Devotion, to a supernal ecstasy or, like the Yoga of Knowledge, to a supernal infinity of consciousness and being, yet they too start from the use of some principal faculty in us by ways and for ends not contemplated in its everyday spontaneous workings. All methods grouped under the common name of Yoga are special psychological processes founded on a fixed truth of Nature and developing, out of normal functions, powers and results which were always latent but which her ordinary movements do not easily or do not often manifest.