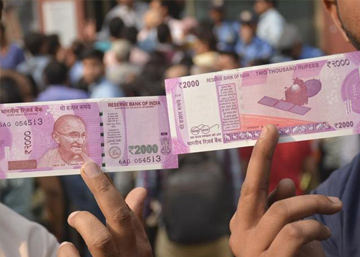 The demonetization measures of the Government of India to curb black money generated some heated debates on the pros and cons of the method. This article examines some of the long-term remedies to the problem of black-money in the light of a deeper perspective.

Money comes in different colours and flavors. White money is the money flowing through legal or legitimate channels of circulation, like banks, taxes, productive enterprises, consumption.  Black money is quite the opposite of it; it is the unaccounted money hoarded in currency or benami transactions or in the form of gold or other precious metals not flowing through legitimate channels of circulation like taxes. There is another category which is in between white and black which we may call as grey. Legally it may be white and also not black, but unproductive; it is speculative trading. Black money has to be made white, grey money has to be minimized and white money has to be progressively enhanced in quantity as well as in quality. Demonstration is a method for converting black money to white money. As I am not an economist I will not go into the pros and cons of this method. In this article, I would like to dwell on some of the deeper aspects of the problem and some lasting solutions.

The Shadowy Motives and the long – term Remedy

What are the human motives which lead to black money? First, at the lowest level, is the instinct of the miser who feels a perverse joy in keeping and hoarding wealth. Second motive is the need for security, especially in periods of unforeseen financial crisis. The third motive is a combination of corruption and greed. When a lot of money is acquired through illegal and dubious channels combined with greed for wealth and power, it can only be kept in black. The fourth motive is that of some entrepreneurs, who say openly or think or feel silently: “why should I give all my hard earned money as tax to government which is corrupt and inefficient, which I could use in a more efficient and productive way”. The fifth motive which belongs to the category of grey money is to make easy wealth without much effort, skill or talent. For a lasting solution to black or grey money, these motives have to be tackled and neutralized.

In our present age, the first motive of the miser is rare and therefore we need not dwell on it. The second motive of security may not be a major factor behind black or grey money among the rich, the educated and the upper middle class, because we now have so many financial instruments like for example insurance, flexible lending schemes etc., that with proper financial planning, financial security can be reasonably assured using white channels. However in India, among the lower middle classes and in rural areas, gold is still regarded as a source of security. So, in India large amount of money is locked in gold and isn’t flowing to productive use. Government has to device innovative schemes, like for example gold bonds with nominal interest, to unlock the wealth stored in gold and make it flow and circulate it in white productive channels. Along with these outer measures there must be a concerted effort to change the mindset of people through extensive education. They have to be made aware that the free circulation of money is one of the factors behind wealth-creation and that hoarding prevents prosperity. They must also be given the understanding that by converting gold into freely circulating white money they are contributing to the prosperity of the nation as whole.

The third motive, corruption and greed, is perhaps the most fertile source of black money. We can create institutions, mechanism, laws and system to check, punish or minimize corruption and greed and reward the opposite motives like honesty, social responsibility, sharing, charity and all the other activities which works for the common good and for the transformation of the society. However there is no lasting remedy to corruption and greed unless that part of our human nature which is afflicted with this malady is healed and transformed. Without this inner transformation, the inner affliction will break through all our institutions and systems however externally efficient and effective they may be. This inner transformation requires a new system of education which awakens the individual to the need of inner purification of the mind and heart from all negativities and rise to a higher level of consciousness – where nobler motives like sharing, giving, honesty and goodness are intrinsic, natural and spontaneous, and the way to achieve this higher transformation,

This may appear as an Utopian spiritual ideal far away from our present condition or unconnected to the theme of our discussion which is very materialistic. But, even for an economic and material problem, the lasting solution can come only through a moral and spiritual transformation because the inner roots of the problem lies in our human nature. Interestingly, during the financial meltdown in U.S, Alan Greenspan former chairman of the Federal Reserve said: “Its human nature, unless somebody can find a way to change human nature, we will have more crises like this because no two crises have anything in common except human nature”. So however far away may be this ideal of inner transformation, we have to begin somewhere in the domain of education and march towards it through progressive and incremental steps. We must note here that the outer remedies and the inner transformation through education are not mutually exclusive. They can be pursued parallelly or simultaneously in a mutually supportive manner. The outer measures providing the right external environment for the inner transformation through education.

The fourth motive of the entrepreneur has certain legitimacy. To create, accumulate, use and circulate wealth and enjoy all the comforts and luxuries which wealth can bring is the natural urge of the entrepreneur. High taxation dampens the spirit of the entrepreneur who is the real source of wealth. Chanakya, the ancient Indian law-giver suggested moderate taxation which is neither too high nor too low. But right and simplified taxation alone isn’t sufficient to motivate the entrepreneur. The government must create a favorable political, legal, economic and cultural environment which encourages and rewards productive, efficient, honest and noble use of wealth for a progressive regeneration of the society and also doesn’t dampen the legitimate enjoyment of wealth. Someone who creates wealth for the society must be allowed to enjoy some of the wealth he creates. There must also be a transformation in the government organization. If the government is efficient, effective, honest and responsive to the needs of the entrepreneurs and the public, like for example providing adequate infrastructure like power and communication, credit facilities, honest and quick services in government department, then people will have no hesitation in paying taxes, even if it is a little high. It is only this type of environment that can unleash the entrepreneurial temperament and energy in a nation, which can put the money into productive and constructive channels.

This brings us to the fourth motive behind the category of money, speculative trading. Here the motive seems to be that of the casino: to make money without effort or ethics. In a capitalistic system, speculative trading may be unavoidable and if it is kept in right proportion, it may even be helpful. But when it goes beyond a limit and begins to dominate the economy, it becomes not only unproductive but also promotes mediocricity, duplicity and laziness. As John Maynard Keynes, one of the founding father of modern economics says “speculations may do no harm as bubbles on a steady stream of enterprise. But the problem is serious when the enterprise becomes the bubble on a whirlpool of speculation. When the capital development of the country becomes the byproduct of a casino, the job is likely to be undone”. Jack Welch, the former CEO of General Electric Company, once said that the Wall Street was one of the places in the world where many mediocre people make a lot of money! Similarly, another highly successful entrepreneur, John M Huntsman, chairman and founder of Huntsman Corporation, the world’s largest privately owned chemical company, says “there are many professions in which one can find examples of hollow values but nowhere it is more evident than on Wall Street where the ruling ethos seems to be the more you deceive the other guy, the more money you make. Wall street has but one objective and one value which is how much money can be made”

We have already indicated the antidote to this “grey” motive while discussing the motive of the entrepreneur. The government must create an environment governed by a higher kind of Darwinism where the honest and efficient contributors to the progress and well being of the society survive and proper, and conversely, the corrupt, inefficient and greedy find no support. It must be an environment where the highest encouragement, incentives and rewards go to the hardworking, productive, efficient, honest, innovative and responsible, who create positive white wealth for the economy, society or culture. And conversely, where the dishonest, unproductive, greedy and selfish wither away due to lack of support not only from the government but also from society and culture. For example, in India bribing is regarded as indispensable to get things done from the government and justified as more or less legitimate. Similarly, in the capitalistic societies of the West, self-interest and greed are justified as legitimate motives. When such dubious motives are justified it is difficult to build an environment where money flows towards constructive channels for building an honest and equitable society.

The Purpose of Money

Let us now move and rise our thoughts beyond the black, white and grey money to the higher purpose of money as an instrument of wealth.

At the economic or material level, the main purpose of money is to acquire the resources and the equipment needed for the wellbeing and progress of the material life and to constantly enhance their efficiency and productivity. Beyond this economic aim there is a higher evolutionary purpose of money. Since the dawn of human civilization, many prophet and visionaries have perceived a spiritual destiny of evolution, towards a higher consciousness beyond mind, where our humanity and earth can attain, its highest fulfillment. The outer forms of this vision or prophecy may differ widely depending on the religious or cultural background of the visionary. The theistic and religious visionaries like St. John of the Cross called it as “Kingdom of God on Earth” or “A new earth and a new heaven.”  In our modern age Sri Aurobindo called it as “Supermind” and Teilhard De Chardin as “Omegapoint” and they describe it in a more psychological language in terms of evolution and transformation of consciousness. But the essence of the prophecy is that our human evolution is moving towards a spiritual destiny beyond the mundane, material and the mental. The higher purpose of money is to create a beautiful and harmonious outer material environment or organization favorable to this evolution of consciousness in the moral, aesthetic and spiritual dimension, culminating in a transformation of consciousness.