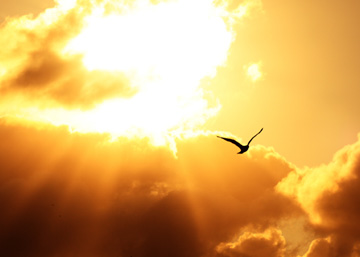 The decisive impetus to an internalization of religion has always come from East, primarily from India…. The Orient is the origin and source of our inner most experiences.

A unique quality of the Indian spiritual and aesthetic mind is the ability to see and express the inner realities behind the outer form and appearances. The following stories illustrate this inward look of the Indian mind.

(This is a recreation of an Upanishadic story)

Aruni is a great sage of upanishadic age in India. He had four sons. One day his eldest son, Anna came to Aruni and asked, “Father, teach me the Truth.” Aruni said, “Look within.” Anna tried to do what his father said. But he saw nothing but darkness within him and the presence of his body. So he came to the conclusion that body is the Truth. Anna went to his Father and said, “Father, I found body is the truth.” But Aruni kept silent.

The next day Aruni’s second son, Prana younger to Anna, came to his father and asked him, “Father teach me the Truth.” Aruni gave the same instruction: “Look within.” Prana sat in meditation and tried to look within. First he felt the same thing which his brother felt, an inner darkness and the presence of his body. But after a few minutes he felt something else other than his body, a breath, a life-force animating the body. So he concluded life-force is the truth. He went to his father and said, “Father, I found Life-force is the truth.” Again Aruni did not reply and remained silent.

The third day, Aruni’s third son, Mana, younger to Prana came to his father and asked:

“Father, teach me the Truth.” Aruni again said, “Look within.” Mana sat in meditation and looked within. First he felt the body, and then his life force like his elder brothers. But he also felt something else other than his body and life. He saw and felt his mind full of thoughts, feelings, sensations. So he concluded mind is the truth. He came to his Father and said, “Father, Mind is the Truth.” Aruni made no reply.

The fourth day, Aruni’s youngest son, Atma, came to his father and asked: “Father, teach me the Truth.” Aruni said, “Look within.” Atma sat in meditation and looked within. He saw his body, life force and his mind successively like his elder brothers. But he also felt something deeper, more luminous, a light within which makes him aware of his body, life and mind. He asked himself, “What is that by which I am aware of my body and life and my thoughts, feelings and sensation” and came to the conclusion, “this light, this consciousness within me, must be the truth.” He went to his father and said, “Father, the consciousness by which I am aware of my body, life and mind is the Truth.” Aruni smiled happily and said,

“My dear son, you are wise and found the path your ignorant brothers missed. Now meditate again and plunge deeper. Try to find the very source of the light, which you have felt. You will discover the consciousness which illumines and sustains all the worlds.”

Atma faithfully followed the instructions of his father. He entered into the very depth of his being, saw the Light which illumined the world and merged into it. He became a great sage like his Father.

The Spirit of Indian Art

Shantiniketan – the great institution founded by Rabindranath Tagore. The art students were sitting all over the vast lawns of the institution – painting, drawing and sculpting. The head of the institution, one of the greatest artists of modern India, is moving among the students, watching and instructing them. He goes near a student who was trying to draw a huge tree in the centre of the lawns.

“But Saurab,” asked the Master “have you seen the Tree?” The student, astonished and irritated by the Master’s question, said, “Sir, I am not blind”. The Master smiled and said, “Oh, yes, obviously your outer eyes are very much intact, but your inner eyes…? The student stared at the Master, not understanding what the Master was trying to convey. The Master went on:

“I am not talking about the physical form of the Tree. What I am asking is whether you have seen the spirit of the Tree.”

The student asked: “How to see the spirit of the Tree”. The Master replied:

(This story is based on an episode in Buddha’s life)

The Enlightened One was in deep meditation. His disciple, Deva, was sitting at the feet of his Master. Deva was informed that Amrapali, the well-known courtesan of the city would be coming today to meet the Master. Deva was not pleased. He was thinking, “What this public woman has to do with our Master”. His thoughts were interrupted by the sound of chariot wheels. A chariot stopped a few yards away and the courtesan, Amrapali descended from the chariot. Deva looked at his Master. The master was looking straight ahead at the courtesan coming slowly towards him with a flower offering in her hands. The Master asked:

“Deva, who is she coming towards us?”

“Revered Sir, she is the courtesan, Amrapali,” replied the disciple.

“She is beautiful in Body and Mind,” said the Master.

“Don’t think like that Deva. You are looking at her outer life with your fleshy eye. You are not seeing her mind. You can’t see because your mind is bound by tradition, society and customs. Your body has renounced the world and become a monk but the customary moral notions of the society and the world in which you live bind your mind. But I can see her mind and it is as beautiful as her body.”