Fourth Dimension Inc. > Society and Culture > The Destiny of India 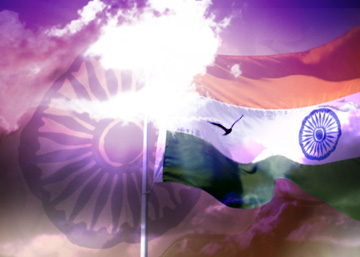 In this message, Sri Aurobindo brings out the need for political and cultural unity of India and for awakening the spiritual genius of India. The message also contains insightful observations on the true mission of a university.

The problems of Indian unity: a historical perspective; mission of a university; spiritual destiny of India.

The Problems of Indian Unity: A Historical Perspective

There is one problem facing the country which concerns us nearly and to this I shall now turn and deal with it, however inadequately, – the demand for the reconstruction of the artificial British-made Presidencies and Provinces into natural divisions forming a new system, new and yet founded on the principle of diversity in unity attempted by ancient India.

India, shut into a separate existence by the Himalayas and the ocean, has always been the home of a peculiar people with characteristics of its own recognisably distinct from all others, with its own distinct civilisation, way of life, way of the spirit, a separate culture, arts, building of society. It has absorbed all that has entered into it, put upon all the Indian stamp, welded the most diverse elements into its fundamental unity. But it has also been throughout a congeries of diverse peoples, lands, kingdoms and, in earlier times, republics also, diverse races, sub-nations with a marked character of their own, developing different brands or forms of civilisation and culture, many schools of art and architecture which yet succeeded in fitting into the general Indian type of civilisation and culture. India’s history throughout has been marked by a tendency, a constant effort to unite all this diversity of elements into a single political whole under a central imperial rule so that India might be politically as well as culturally one.

Even after a rift had been created by the irruption of the Mohammedan peoples with their very different religion and social structure, there continued a constant effort of political unification and there was a tendency towards a mingling of cultures and their mutual influence on each other; even some heroic attempts were made to discover or create a common religion built out of these two apparently irreconcilable faiths and here too there were mutual influences.

But throughout India’s history the political unity was never entirely attained and for this there were several causes, – first, vastness of space and insufficiency of communications preventing the drawing close of all these different peoples; secondly, the method used which was the military domination by one people or one imperial dynasty over the rest of the country which led to a succession of empires, none of them permanent; lastly, the absence of any will to crush out of existence all these different kingdoms and fuse together these different peoples and force them into a single substance and a single shape.

Then came the British Empire in India which recast the whole country into artificial provinces made for its own convenience, disregarding the principle of division into regional peoples but not abolishing that division. For there had grown up out of the original elements a natural system of sub-nations with different languages, literatures and other traditions of their own, the four Dravidian peoples, Bengal, Maharashtra, Gujarat, Punjab, Sind, Assam, Orissa, Nepal, the Hindi-speaking peoples of the North, Rajputana and Bihar. British rule with its provincial administration did not unite these peoples but it did impose upon them the habit of a common type of administration, a closer intercommunication through the English language and by the education it gave there was created a more diffused and more militant form of patriotism, the desire for liberation and the need of unity in the struggle to achieve that liberation. A sufficient fighting unity was brought about to win freedom, but freedom obtained did not carry with it a complete union of the country. On the contrary, India was deliberately split on the basis of the two-nation theory into Pakistan and Hindustan with the deadly consequences which we know.

In taking over the administration from Britain we had inevitably to follow the line of least resistance and proceed on the basis of the artificial British-made provinces, at least for the time; this provisional arrangement now threatens to become permanent, at least in the main and some see an advantage in this permanence. For they think it will help the unification of the country and save us from the necessity of preserving regional sub-nations which in the past kept a country from an entire and thorough-going unification and uniformity.

In a rigorous unification they see the only true union, a single nation with a standardised and uniform administration, language, literature, culture, art, education, – all carried on through the agency of one national tongue. How far such a conception can be carried out in the future one cannot forecast, but at present it is obviously impracticable, and it is doubtful if it is for India truly desirable.

The ancient diversities of the country carried in them great advantages as well as drawbacks. By these differences the country was made the home of many living and pulsating centres of life, art, culture, a richly and brilliantly coloured diversity in unity; all was not drawn up into a few provincial capitals or an imperial metropolis, other towns and regions remaining subordinated and indistinctive or even culturally asleep; the whole nation lived with a full life in its many parts and this increased enormously the creative energy of the whole. There is no possibility any longer that this diversity will endanger or diminish the unity of India. Those vast spaces which kept her people from closeness and a full interplay have been abolished in their separating effect by the march of Science and the swiftness of the means of communication.

The idea of federation and a complete machinery for its perfect working have been discovered and will be at full work. Above all, the spirit of patriotic unity has been too firmly established in the people to be easily effaced or diminished, and it would be more endangered by refusing to allow the natural play of life of the sub-nations than by satisfying their legitimate aspirations. The Congress itself in the days before liberation came had pledged itself to the formation of linguistic provinces, and to follow it out, if not immediately, yet as early as may conveniently be, might well be considered the wisest course. India’s national life will then be founded on her natural strengths and the principle of unity in diversity which has always been normal to her and its fulfilment the fundamental course of her being and its very nature, the Many in the One, would place her on the sure foundation of her “Swabhava and Swadharma.”

The Mission of a University

In this new regime your University will find its function and fulfilment. Its origin has been different from that of other Indian Universities; they were established by the initiative of a foreign Government as a means of introducing their own civilisation into India, situated in the capital towns of the Presidencies and formed as teaching and examining bodies with purely academic aims: Benares and Aligarh had a different origin but were all-India institutions serving the two chief religious communities of the country. Andhra University has been created by a patriotic Andhra initiative, situated not in a Presidency capital but in an Andhra town and serving consciously the life of a regional people. The home of a robust and virile and energetic race, great by the part it had played in the past in the political life of India, great by its achievements in art, architecture, sculpture, music, Andhra looks back upon imperial memories, a place in the succession of empires and imperial dynasties which reigned over a large part of the country; it looks back on the more recent memory of the glories of the last Hindu Empire of Vijayanagar, – a magnificent record for any people. Your University can take its high position as a centre of light and learning, knowledge and culture which can train the youth of Andhra to be worthy of their forefathers: the great past should lead to a future as great or even greater.

Not only Science but Art, not only book-knowledge and information but growth in culture and character are parts of a true education; to help the individual to develop his capacities, to help in the forming of thinkers and creators and men of vision and action of the future, this is a part of its work. Moreover, the life of the regional people must not be shut up in itself; its youths have also to contact the life of the other similar peoples of India interacting with them in industry and commerce and the other practical fields of life but also in the things of the mind and spirit. Also, they have to learn not only to be citizens of Andhra but to be citizens of India; the life of the nation is their life. An elite has to be formed which has an adequate understanding of all great national affairs or problems and be able to represent Andhra in the councils of the nation and in every activity and undertaking of national interest calling for the support and participation of her peoples.

There is still a wider field in which India will need the services of men of ability and character from all parts of the country, the international field. For she stands already as a considerable international figure and this will grow as time goes on into vast proportions; she is likely in time to take her place as one of the preponderant States whose voices will be strongest and their lead and their action determinative of the world’s future. For all this she needs men whose training as well as their talent, genius and force of character is of the first order. In all these fields your University can be of supreme service and do a work of immeasurable importance.

The Spiritual Destiny of India

There are deeper issues for India herself, since by following certain tempting directions she may conceivably become a nation like many others evolving an opulent industry and commerce, a powerful organisation of social and political life, an immense military strength, practising power-politics with a high degree of success, guarding and extending zealously her gains and her interests, dominating even a large part of the world, but in this apparently magnificent progression forfeiting its Swadharma, losing its soul. Then ancient India and her spirit might disappear altogether and we would have only one more nation like the others and that would be a real gain neither to the world nor to us. There is a question whether she may prosper more harmlessly in the outward life yet lose altogether her richly massed and firmly held spiritual experience and knowledge. It would be a tragic irony of fate if India were to throw away her spiritual heritage at the very moment when in the rest of the world there is more and more a turning towards her for spiritual help and a saving Light. This must not and will surely not happen; but it cannot be said that the danger is not there. There are indeed other numerous and difficult problems that face this country or will very soon face it. No doubt we will win through, but we must not disguise from ourselves the fact that after these long years of subjection and its cramping and impairing effects a great inner as well as outer liberation and change, a vast inner and outer progress is needed if we are to fulfill India’s true destiny.