Fourth Dimension Inc. > Society and Culture > The Nature of Money and Wealth Creation 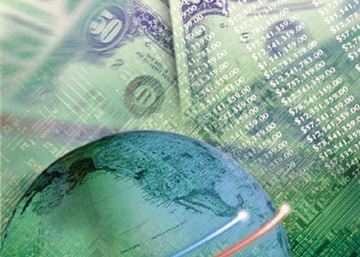 Money is not just a material entity. The material form of money is the outer expression of some deeper forces of universal and human Nature. For a truly efficient and productive creation of wealth, which leads to the enrichment of life, we have to understand the true nature of money and its implications for wealth creation. This article examines the process of wealth creation in the light of a deeper insight into the nature of money.

The historians of money trace its roots to the barter system of interchange of goods and services by the producers. Later, with the advent of the middleman or intermediary between the producer and the consumer, came the currency note as a symbol and indicator for the value of the interchange. So the first character of money is interchange. And when we probe further and ask what is the deeper cause of this interchange we will hit upon one of the fundamental laws of life: interdependence. We are all part of an interacting, interdependent and interlinked unity of life. So no individual or collective human organism can be fully independent. Every human organism will have something, which others don’t have, and lack something, which others possess, this creates the need for interchange. This constant and repeated interchange driven by this law of interdependence creates a circulating force in the vital life of humanity. Here comes the second character of money, circulation. A fluid force of circulating interchange is the essential nature of the money-force. Thus we can see that money is a universal force proceeding from a universal law of life.

Thus the essential nature of money is a fluid force of circulating interchange. More it circulates, more it grows. According to modern monetary theory, quantity of money in an economic system depends on the velocity of circulation of money. So for increasing the prosperity of a community the money-force should never remain frozen for too long; it should always remain liquid, in a state of constant flow and circulation.

The concept of “cash flow” in financial management is very much in sync with the nature of money. Cash reserves of a company should be neither too high nor too low and must be always in a state of flow and never be static or frozen. The most important part of this circulation or flow is spending. The money force has to be always in a state of generous spending to create wealth for the society. As the Mother of Sri Aurobindo Ashram points out, that the money-force “is alive only when it circulates. If you want to keep it up, it decays. It is as if you wanted to enclose water in a vase to keep it always, after sometime your water would be absolutely putrefied. With money it is the same” and therefore “the first thing to do when one has money is to give it and money is valuable only when one has spent it.” This doesn’t mean saving or holding cash reserve has to be neglected. But the main emphasis has to be on generous spending to create wealth for the society with a certain rhythms or balance between saving, spending, receiving, holding, production, creation, profit and recycling or in other words a rhythmic liquidity. A free and large and generous spending and receiving, constantly ploughing back the return and profit for a progressive increase in the productivity, richness and well-being of the material life with an intuitive understanding of the right rhythm between the various functions, facets and stages of the flow and process of the money-force – this is the mentality or attitude which leads to a progressive prosperity.

In a psychological perspective, money is an instrument for the satisfaction of human need or desire. No one seeks money, except a few foolish misers, for its own sake. We seek money because it fulfills some human need or desire. The nature of this need or desire changes as we progress in the path of human evolution. In the early stages of human development when we are predominantly physical beings we seek for the basic needs of our body like food, clothing, shelter, survival.

When these basic needs are reasonably satisfied we seek for a better enjoyment of life or a more efficient and productive utilization of life or for power and mastery over life. As we progress further, and grow in our mental, moral and spiritual development we seek for knowledge, values, and ideals or for some form of inner fulfillment. We use money as an instrument for the fulfillment of these evolving needs or desire for enjoyment, efficiency, productivity, power, mastery, knowledge or inner fulfillment.

The Quality of Economic Life

Thus, Money or the financial force has three dimensions. First is the material dimension, which is the currency note or dollar; second is the vital dimension, which is the circulating force, created by the interchange of goods and services; third is the psychological dimension made of desire for fulfillment. In a quantitative sense, the velocity of circulation of the vital force behind money is an important factor in the prosperity of a community. The more it circulates, and faster, the more it grows. But for a balanced prosperity it must be a productive circulation which adds tangible wealth to the community or fulfill legitimate human needs and not a speculative circulation which fills the pockets of a few financial manipulators.

In a qualitative perspective, the nature of the economic life of a community depends mainly on the psychological dimension, which means the nature of the needs, desires and motives of people. When the needs are predominantly physical, as in most of the tribal communities the economy is simple and primitive. If the desires are mainly material or sensuous enjoyment and the driving motives are the greed for wealth, power, enjoyment or self-interest of individual and collective ego, the quality of the economic life still remains gross, though less primitive and simple.

If the technological and pragmatic mind of the community is well-developed, the economy may be more efficient and productive, but if the desires and motives of people are material, sensuous and exclusively centered around the competitive self-interest and greed of the individual and collective ego of the vital being in man, then it will not lead to any qualitative improvement in the economic life; it will also be subjected to all the turmoil, turbulence and instability of this part of our human nature, full of scams, meltdown, depressions, swings in “sentiments” leading to irrational booms and busts in the stock-market.

The economy acquires stability, balance and qualitative upliftment only when it is regulated and governed by the higher mental, moral, aesthetic and spiritual nature in us, which seeks for truth, beauty, harmony and goodness. However, these universal values of the higher self in us have to take a form which is appropriate to the unique and intrinsic nature of the economic life of the community. The seeking for truth will take the form of greater honesty, transparency and integrity in all financial transactions. The other aspect of truth is to seek for the deepest, highest and the holistic truth, law and purpose of business, commerce and finance and regulate the economic life according to this greater and truer knowledge. The quest for beauty and harmony must lead to a more beautiful and harmonious equipment and organization of the material and economic life of the society and a more balanced financial system. The aspiration for goodness will manifest itself as a generous flow of funds to the task of eradication of poverty and inequality, creating social capital, ecological sustainability and to all activities which lead to the mental, moral, aesthetic and spiritual growth of the individual or the collectivity.