Fourth Dimension Inc. > Sustainability > Learning from the Technology of Nature 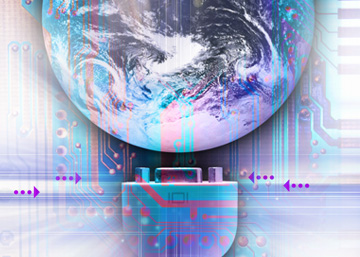 Review of the book, Pulse: How Nature is Inspiring the Technology of the 21st Century, by Robert Frenay, Little Brown, London.

Since the dawn of human civilization nature was always a source of learning and inspiration for human being. Much of our art, poetry, literature, religion and science are inspired by Nature. Ancients worshipped and revered Nature. The sciences of the ancient were a form of worship of Nature. Even in our modern age, some of the early pioneers of science like for example Johannes Kepler did their work with a deep religious reverence for Nature as the creative manifestation of God. But at a certain stage in the evolution of modern science, this reverential attitude to Nature was replaced by the utilitarian and the materialistic conception of Nature as a storehouse of resources which has to be exploited to the full for the fulfillment human needs, desires or greeds.

There are two factors behind this negative change. The first factor is the advent of Technology and its great success in harnessing the forces of Nature for economic and industrial development, which gave birth to the industrial revolution. The second factor is the mechanistic conception of Nature promoted by Newtonian physics. Most of the present ills of our modern civilization like environmental degradation, dehumanization of life and its alienation from the natural world are the result of these negative attitudes to Nature promoted by the mechanistic and industrial paradigm of science and technology. Here comes the importance of the book under review by science writer Robert Frenay. In this book Frenay presents a detailed and fascinating description of a new movement in science and technology which can lead to a harmonious integration of man-made technological systems with the natural world.

The Eco-technology of the Future

The main principle of this new movement is to create human and technological system which mimics and imitate the technology of Nature or in other words as Frenay puts it “human system and machines that work like living beings”. As we have said earlier, learning from Nature is not something new. Even the old technological paradigm is also based on this principle. But this old paradigm is based on a very limited understanding of Nature provided by the Newtonian physics. As Frenay explains “adapting lessons from Nature is not new. The machine age itself was an early attempt to do just that. Unfortunately, it stopped short in its understanding of Nature basing our industry and eventually much of our culture today on the concepts from the physics of the seventeenth and eighteenth century.” But at present new discoveries in life-sciences are opening fresh horizons of knowledge which brings a deeper and broader understanding of the natural world than the one provided by old physics. According to Frenay, this new knowledge has the potential to link our modern culture seamlessly with Nature and resolve the conflict between “those who revere the natural world and those who laud technology” .

Frenay draws his insights from fields as diverse as “genetics, cell biology, brain structure and ecology” and brings out their application to equally diverse areas ranging from “material science, robotics, artificial intelligence, artificial life, agriculture, town planning, manufacturing, economic theory and management.” In general, this new paradigm in technology is based on what Frenay calls as New Biology which according to Frenay, “is not biotech; its not genetic engineering, atleast not as it is typically practiced today, and its not cloning either. Most biotech treats nature as if it worked like a machine. The new biology makes machines that work like living things.” We can find in Frenay’s book many fascinating ideas, inventions and research projects like for example emotional computers, ships that swim like fish, farms that grow like meadows, industrial eco-systems, money that mimics the energy flow in Nature.

The Disciple of Nature

But from a deeper perspective the most important aspect of Frenay’s book is the attitude to Nature which permeates the entire discussion and discourage. This new movement in science and technology approaches Nature not with the aggressive and violent attitude of exploitation, control and mastery but with the humility of a student and disciple of Nature; who wants to learn from and be in tune with her rhythms and laws. Not control and subjugation but learning, attunement and harmony are the values of this new ecological paradigm in technology. “This book” says Frenay “is a description of Nature not as a place we visit or a focus of concern but a system, a philosophy, a guide for our thinking” based on a better understanding of nature. And finally, Frenay concludes with a humble contemplation of human condition.

“Life on earth has existed on earth for nearly four billion years and species tend to live for millions. Modern humans bring a new kind of awareness to life but are a mere one hundred thousand years. We are still babies in evolutionary scale. We have only just opened our eyes. We are beginning to see.”

Are we really? Our seeing is still ignorant and half-blind. We are still misleading ourselves, tending toward self destruction. We have to grow towards adulthood, maturity and wisdom. We must acquire the inner vision to see more clearly and fully our evolutionary destiny and what Nature wants us to become in the future. This cannot be achieved by ecology or technology, even the more benign and ecologically attuned technology conceived in Frenay’s book; it requires an inner development, an evolution of consciousness towards higher ranges of intuitive awareness beyond the rational mind.