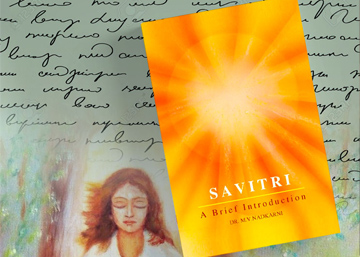 A Review of the book Invitation to Savitri by Dr. M. V. Nadkarni, published by AuroPublications, Sri Aurobindo Society, Puducherry.

This book is an invitation to the Temple of Savitri, the incarnate divine Mother in Sri Aurobindo’s epic and to the magnificent worlds of consciousness revealed by Sri Aurobindo in luminous and exquisite verses in his great epic, with the author of the book, Dr. Nadkarni as our guide.

Dr. Nadkarni needs no introduction to the disciples and devotees of Sri Aurobindo and The Mother. The blurb to the book states Nadkarniji is “one of the most respected authorities” on Savitri. This book is based on edited transcripts of a series of 31 talks on Savitri given by Nadkarni at Sri Aurobindo Society. The talks provide a broad context for understanding the deeper significance of the epic.

There cannot be a better review of the book than the brilliant preface to the book by Dr. Alok Pandey, which brings out forcefully the importance of Savitri and Nadkarniji’s great contribution in spreading the message of Savitri. Regarding Savitri, Alokda says, “Sri Aurobindo not only gives hope but also fulfills the hiatus left in our understanding by a new light that reconciles God and World, reunites the creation and the creator in a happy embrace. Savitri is this new vision, this New Light clothed in words and symbols of beauty and delight”. On the work of Nadkarni ji, Alokda states “Being a professor of linguistics and master in English language, as well as a practitioner on the path of Integral Yoga, he was in a unique position to share the secrets he had discovered in and through Savitri with all who were keen and interested. Savitri is the wine Divine; the book is the cup.  Nadkarni became the instrument through which this nectar was being poured into the world”

In his lectures, Nadkarniji raises many interesting questions and answers them with deep insight or with wit and humoror with interesting images, stories and anecdotes. Asking the question what is the primary purpose of reading Savitri, Nadkarniji says that Savitri is “a verbal embodiment” of Sri Aurobindo’s consciousness and “the ultimate reason for reading Savitri is to get for oneself into contact with Sri Aurobindo’s consciousness”. In a beautiful image Nadkarniji says that Savitri is the flute of Sri Aurobindo; “the magic enchantment of his flute” which Sri Aurobindo has given to humanity as his gift. “Sri Aurobindo wrote Savitri out of sheer love for people like you and me who have the soul of the gopis” says Nadkarniji “If you have a heart and if you can give your hearts adoration, here is the Lord’s flute, submit yourself to its enchantment. You don’t have to do anything at all except to keep the temple clean that the music is received, enchantment is felt. So this is the primary purpose for which one reads Savitri” Personally, for someone like me who feels a greater joy in the music and rhythm of Savitri than its meaning, the image of the flute is delightful.

The true meaning of the deep and profound spiritual truths mused in Savitri can’t be fully understood without a same, similar or corresponding inner experience. We may try to understand intellectually which may give us some form of mental satisfaction and also may be of some help in our mental development. We may try to understand intuitively by reading it in a silent mind and allowing the meaning to rise from deeper layers of our consciousness. But the music and “flute” of Savitri is something different.

One of the unique features of these talks is that Nadkarniji deftly relates the message of Savitri with the conditions of the present world and the various philosophies, legends and myths of the ancient world, sprinkled with quotes and anecdotes from Sri Aurobindo and others which make the talks relevant, contemporary and interesting.

The other important part of these talks is that Nadkarniji brings out with great clarity and force the nature of the quest of King Ashwapati, Savitri’s father in the epic, which is also Sri Aurobindo’s quest. Religion, science, philosophy, morality and other things, working at the mental level, tried to transform humanity, but all failed. Many great saints, avatars have come, like rays of light from the Sun, radiate their light on Earth for some time and go back to the luminous worlds from which they came, perhaps carrying a few liberated disciples with them. But the humanity and Earth remains as it is – imperfect, ignorant, and crude. Ashwapati’s quest is to change this human condition by bringing down to earth a higher power which will uplift and transform humanity as a whole to a higher supramental consciousness in which all the higher aspirations of humanity for truth , beauty, goodness, peace, love, harmony, unity, and perfection are perfectly realized – not as abstractions and ideas of the mind or sentiments and feelings of the heart, but as concrete experiential realities in the very substance of our consciousness- not at once or en masse or by a swift miracle, but gradually through the  pioneering action by a New Race or a cluster of spiritually transformed human beings. This central message by Sri Aurobindo revealed through Savitri, comes out repeatedly in Nadkarniji’s talk in words charged with a luminous and striking clarity, like for example the following passage:

“Almost all forces of the intellect have been tried – education, science, religion, philanthropy, morality, spirituality. Spirituality gets hold of the soul within but everything else is lost. The earth is lost, the very purpose for which God built this beautiful world and the evolutionary nature invested great tremendous creativity to create a man out of a handful of dust. What are we? We are handful of dust, but our destiny is to represent here, manifest here in this creation, God’s perfection. If you want this perfection here, you need to bring a transcendental power. That is what Ashwapathi finds out”

The great song of hope, redemption, transformation “fluted” by Sri Aurobindo in Savitri is brought out in this book by Nadkarniji in a form accessible to all the educated and thinking sections of humanity. I hope and pray that the book reaches a larger audience, especially the young minds.