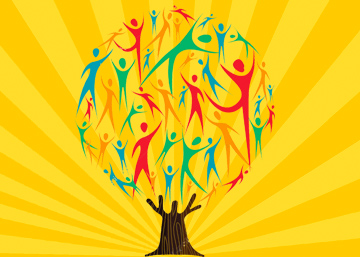 A collectivity, like a nation, community or an organisation is a living human organism with an inner and outer being.  So, as in the case of the individual, for the integral development of the human potential in a community, its outer life as well as the inner being has to be fully developed to their utmost capabilities.  However, in an approach which aims at integrating the individual and collective life of man around the inner essence of the human being, the predominant stress has to be on living, moulding and shaping the outer life from within outwards.  In this article we examine the basic principles and the process of this inner awakening of the collectivity with an emphasis on understanding the guiding values and ideals and the nature of education and discipline which will lead to this awakening.

The Process of Inner Awakening: Individual and the Collectivity

Most of us, individually, live in our surface consciousness tethered to the body with a heavily externalised outlook on things.  The first major step in the inner development of the individual is to cease to be the physical man living mainly in his bodily consciousness and become the vital and mental man who lives predominantly either in his emotional, vital, pragmatic or thinking mind and will.  This happens in the course of natural evolution of the individual, but which can be accelerated by integral education. As he progresses further in his inner development by following a Yogic discipline, he enters into the deeper layers of his vital and mental consciousness which are called in integral psychology as the subliminal consciousness.  As he plunges further beyond the subliminal he enters into the spiritual realms of consciousness.  These deeper and higher levels of consciousness are in direct contact with the universal consciousness and energies of Nature with a higher range of faculties, beyond the ordinary mind. They can perceive the deeper and the inner realities which are invisible to the ordinary mind and the occult, psychological, cosmic and spiritual forces behind the outer phenomena.

As the individual progresses in these higher ranges of consciousness, he begins to live more and more from within outwards.  He is no longer a slave of his superficial surface mature which is mostly formed by the external and environmental influences.  The more he was able to live from within outwards, the more he becomes the master of his environment, no longer shaped by the environment but moulding it according to the deeper and higher knowledge and values of his inner being.

The Path of Collective Self-realisation

The consciousness of the collectivity is always at a much lower level than its most advanced or even its average individuals.  The collectivity is mostly an obscure mass, which lives, in its subconscious physical and vital instincts.  But in our modern age, a considerable part of this collective mass is getting more and more mentalised, at the various levels of the mind.  For our human mind is not a homogenous entity, but exists at various levels.

At the lowest level is what we may call as the sensational and informational mind.  This part of the mind receives whatever sensations and informations which it can get from the external world in a chaotic mass and it is not capable of any coherent thinking.  The next higher layer of the mind surface is the emotional, dynamic and pragmatic intelligence and will which brings worldly success, power and wealth.  It is the mind of the successful businessman, entrepreneur, politician, industrialist, and professional.  The third layer is the rational, ethical and aesthetic intelligence which is capable of abstract and conceptual thinking, seeks for higher values like truth, beauty and goodness and tries to organise life according to these higher ideals.  These two higher layers of the mind are potentially capable of receiving the deeper and higher intuitions and inspirations of the subliminal and spiritual mind and when they are able to do it, they become intuitive intelligence.

At present majority of the mentalised human mass lives in the first layers of the mind.  However, since the days of industrial revolution more and more of the human mass is entering into the second layer.  The third layer is still a small minority of the ēlite of humanity.  We can say the collectivity has reached the first decisive stage in its inner evolution, when the majority of its members begins to live in the two higher layers of the mind, with its leaders of thought and action living in the deepest and highest point of their emotional, pragmatic and thinking intelligence, touched by the ethical and the aesthetic, receiving the intuitions and inspirations of the subliminal and spiritual, and shaping the outer life according to the greater knowledge and values of these deeper and higher realms of consciousness.

This higher evolution of the collectivity will open up many new possibilities.  When the thinking, pragmatic or scientific mind of our modern humanity begins to open itself to the subliminal consciousness it may lad to a new science with a more direct action of mind over life and matter and a more direct and conscious communion of Mind with Mind without the need for any intermediary physical instruments or in other words a new revival of occultism and parapsychology.  For subliminal is the realm of the occult and parapsychological phenomena like extrasensory perception, telepathy, telecognition and telekinesis.  This entry into the subliminal has advantages as well as dangers.

The advantage is that it will lead to a vast extension of the existing powers of the human mind and a greater mastery of the mind over life and matter.  But if this emergence of subliminal powers of the mind is not accompanied by an equally strong ethical, aesthetic and spiritual awakening, we will go on committing the same mistakes we are committing now like war and violence of all kinds, but on a larger scale with greater powers and more disastrous consequences.  But even spiritual awakening, if it is one sided, exclusive or self-contained as it happened in a certain stage in the evolution of Indian civilisation tends to draw away from the world and therefore cannot lead to the integral fulfillment of humanity.  We need an integral spiritual vision and an approach to development which leads to integral flowering of the human potential in all the levels of the individual and collectivity, physical, vital, mental, subliminal and spiritual, and their harmonious self-expression in the economic, social, political and cultural life.

(1)   A preparatory inner purification of the mind and heart through a vital mental, moral and aesthetic discipline.  The main purpose of this discipline is to eliminate all forms of gross movements like inertia, laziness, violence, greed, lust, aggressive self-assertion from out nature and impose a calm and tranquil balance on our mind and heart.

(2)   In work and action progressive subordination of our ego and self-interests to a self-transcending mental, moral and spiritual ideal or cause with an emphasis on renunciation of the fruits of action or contribution to the common good of all and well-being of the whole.

(3)   A culture of increasing consciousness and self-awareness by which we can become more and more conscious of the various part and depths sand heights of our inner being and their laws and potentialities.

(4)   Developing the capacity for concentration, for focusing all the energies of our consciousness on an inner and outer object, idea, activity or a state of being or consciousness.

(5)   A discipline of introversion by which we can enter deep within ourself and come into some form direct contact or union with our inner most spiritual self or divinity within.