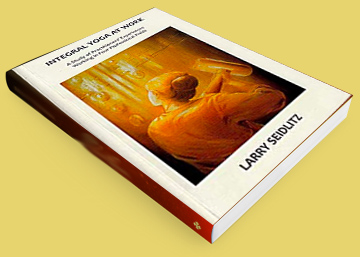 (A review and a commentary on the book Integral Yoga At Works, A Study of Practioners’ Experiences working in Four Professional Fields, by Larry Siedlitz, PhD, Indian Psychology Institute, New Delhi)

Yoga has become a well-known word all over the world though the true and deeper meaning and aims of Yoga is much less known.  In the Indian paradigm of Yoga, Karma Yoga, Yoga of works, is an important part of triune path of Yoga expounded by the Indian scripture Bhagavat Gita, the other two paths are Yoga of knowledge and Yoga of Devotion.

The author, Dr. Larry Siedlitz, has worked as a research psychologists in USA and a practitioner of Integral Yoga. This book under review examines the experiences of the practioners of Sri Aurobindo’s path of works in Integral Yoga in four professional fields: business management, health care, education and the arts.  As the author of this book Dr. LarrySiedlitz describes the content and purpose of this book.

“In the present study, I examine how the Integral Yoga can be applied in four general fields of professional endeavour; business management, health care, education and the arts….  The study will examine how present day practioners of Integral Yoga apply the Yoga in their work, first in a general way, and then more specifically what Sri Aurobindo and the Mother have written about how such works can be approached and carried out in these four areas.”

Siedlitz classifies the experiences of the practioners into following categories:

Money is not a primary motivation in work.

Aspiration to feel the divine’s presence in work and bring it down into all the activities of life.

As the practioner progresses in the path and in her self-dedication to the Divine she feels that the Divine Force is doing the work in her and she is only an instrument of the Divine, which brings efficiency and harmony in work.

Work and life pursued in the spirit of Karma Yoga brings a deeper meaning to and a greater fulfilment in life.

Siedlitz presents an interesting summary of the results or outcome of these experiences of the practioners, which may be described points-wise as:

Does these conclusions present a very rosy picture of Karma Yoga as an easy path to fulfilment and perfection? Most of the practioners in this book describes only their positive experience like for example, Thomas, a manager of a commercial unit says:  “For instance, I don’t know a lot of software.  I just click here and there and it comes….it’s kind of purely intuitive.  The vibration comes from above and it gets realised.  You are not the one doing it.  That is a beautiful sensation.  You make the moves: You take the scissors when you need it, you need a number of cards and you take exactly the right number of cards.  Those are micro moments.  The more you are concentrated and penetrating into the things you have to do….the more it comes.  Those are again what I call Ananda moments.”

This gives an indication of the higher potentialities of yoga. But is this the entire nature of the path of Yoga, a smooth and blissful journey to the Divine?  There is the other side of it made of difficulties and struggles and dangers and pitfalls.  Siedlitz is very much aware of this part of the journey.  As he points out:               “This is perhaps an important point to remember for less-experienced practioners, because, sadhana also brings us face to face with the difficulties of our nature which can sometimes seem intractable until they are come.  So it is not without its difficulties, but we have seen that these difficulties can be viewed as opportunities for growth and the participants felt supported and helped to overcoming challenges.”

Since this book is more for beginners rather than for seasoned or advanced practioners, it may not be necessary or desirable to stress on the difficulties in the path, which may scare off the potential seeker.  So Siedlitz has done the right thing in focussing on the higher potentialities and possibilities of Yoga.  But still, a concise narrative or summary of the type of difficulties which the practioner may face in the later stages of Yoga could have made the book more balanced and also helpful to the seeker in understanding the hard realities of the path of Yoga.  The author could have asked the practioners to describe the precise nature of the inner and outer difficulties they have encountered in the path and how they are able to overcome them.

Siedlitz stresses constantly on the idea that difficulties are opportunities for progress.  This may be true in general, but it happens only when they are overcome which is not easy on the path of Yoga, especially the inner difficulties like anger, sex, inertia, unwillingness to change, conflict in relationships and the obstinate resistance, revolt, hostility and refusals of our lower nature against our higher aspiration.  In Yoga, these difficulties and opposition of our lower nature and all the hidden and suppressed desires, darkness and falsehoods in it raise with great force.  As Mother says in one of her conversations: “what obstinate resistance in this lower nature what blind and stupid attachment to the animal ways of being, what a refusal to liberate oneself.”

This brings to another very important aspect of the path of Yoga which I feel is not given sufficient attention in this book.  It is the inner discipline of Yoga.

For example, there are the well-known disciplines of Yoga like inner purification of the mind and heart from negative movements like anger, jealousy, lust and greed, overcoming ego and desire, and in the path of Karma Yoga, the discipline of Equanimity and offering all our works as an offering with a complete renunciation of the results of our action.  Siedlitz talks, mentions “equality to money” as one of the experiences of practioner.  But in Yoga equality is a much deeper, inward experience of a calm, undisturbed equanimity under all circumstances, good and bad, pleasant and unpleasant and in the midst of all the vicissitudes and dualities of life like pleasure and pain, joy and grief, success and failure, praise and blame.

Siedlitz could have queried the practioners on what is the nature of the inner and outer disciplines they were pursuing and alsop about the difficulties they had encountered in putting them into practice and how they are able to overcome them?  This would have added a practical dimension to the book and very helpful to the aspiring seeker who wants to pursue the path of karma Yoga.

All these are just suggestions.  The book as a whole is brilliant, contemporary and relevant; it is very different from the traditional books on Yoga because it is based not on ancient texts, but on the teachings of modern masters of Yoga like Sri Aurobindo and the Mother and the experiences of living practioners of Yoga working in professional fields.  We need many such works on Yoga to make this ancient Science a living force for steering humanity towards its next and future step in evolution and its spiritual destiny.