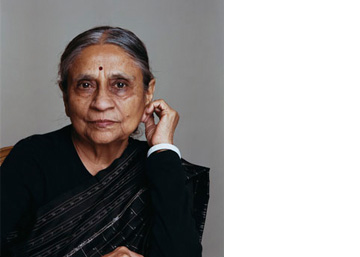 Many of us urbanites know SEWA as the organisation that sells exquisite Lucknawi chikan kurtas. We wait for the sale, buy our pieces and go home with hardly a thought about the vision and struggle behind each piece of garment. What is SEWA (Self Employed Women’s Association) and who is behind all this? The first thing that struck me when I went to talk to Ela Bhatt, Ela ben to all, was her quiet calm. No anxious impatience of the doer, no arrogance of the achiever. This woman seemed to know that time was important, but also that quality time was more important. Ela ben has opened up a new chapter in the history of women’s leadership and entrepreneurship, not by the saccharine mould of charity but by empowerment in very real terms. She is the recipient of the Padma Shri and the Padmabhushan. The second part of the interview with Ela Bhatt, the founder of SEWA.

Rukmini Sekhar: Ela ben, you have been working with women for so long. And you understand them very well. You are aware of the leadership that is emerging from SEWA. Do you see the next century as a century of women leaders, entrepreneurs and achievers?

Ela Bhatt: I’m not a seer, but I would like to see what you say come true. I do believe that whenever there is social change women are the leaders. This I say with my own experience. Look at the women of Kutch and Banaskantha who are changing the face of the desert. They are even arresting the rural-urban migration from this area. Another example is in banking. I have great faith in the sisterhood of those women who have and those who do not, especially in India. Gandhi said, that in the fight for social justice where the weapons are truth and non-violence women are the natural leaders.

In SEWA we have seen women like Karima Bibi who makes quilt covers from rags for a living. She is a widow. Today, she sits on the negotiating table against her own brother who is a big vyapari. There are many like Karima Bibi. Though some SEWA women did not contest panchayat elections they were unanimously invited to the village panchayats. Women are better fighters against the wrath of nature, they are better conservators of natural resources, they are more responsible for the next generation in general they are more futuristic than men and are better savers. They really are the natural leaders. Wherever they have been given opportunities for their development they have proven themselves. As I said earlier… what we women lack is a common vision. If we start behaving like men we won’t get very far.

R.S: This I believe is true of the common woman who languishes for want of opportunities. But when you put women in real positions of power – prime ministers, chief ministers, corporate heads, they become equally aggressive, aggrandising and corrupt as anyone else. And sometimes you feel disappointed by members of your own sex. So, is ‘empowerment’ your answer, or a ‘common ideology’ that should govern women?

E.B.: Empowerment is only one thing. But to be powerful for what? No, we don’t have a common agenda. It is difficult since we are not a homogenous group. The only common things we have are our bodies and motherhood. But if women came to power then what would be our foreign policy? How are we going to allocate our resources? Will there be less rapes? During Benazir Bhutto’s regime the rate of rapes by the police increased three times more than normal. What I mean is that we have not sat down and thought of a woman’s vision of the future.

And the other thing is that we have not taken men into our confidence. Without their co-operation we cannot change the world. They should participate in the empowerment of women.

R.S: More a personal question, Ela ben, you are dealing with issues very practically – sort of hands on. But is there a deep philosophical motivation that impels you, that makes you look forward to the next day?

A lot of us are devoid of any philosophical moorings. We exist, we don’t even live. Some of our younger readers would like to know what charges you.

E.B: The answer is simple. We are a product of those days when the country was fighting for freedom. Then we got the freedom. The atmosphere was charged with patriotism and nationalism and we wanted to build up the nation. Also, my husband was a student leader at that time and so we had the same ideology and spirit. He has always been a great support to me, like a rock. I was thankfully out of all domestic obstacles. Whenever there is confusion in my mind I look inside of myself for answers. The answer inevitably is, go for whatever cements and binds, not for something that divides.

The women I work with, those poor women, they give me so much strength that I hardly feel tired at the end of the day. Now I’m sixty-three and my energy has begun to flag but I know I have worked hard. My level of tolerance is high and I rarely get frustrated or for that matter, excited.

R.S: It seems to be the ideal ingredients that go to make a social worker. Are you quite detached from your work?

E.B.: Things don’t touch me too much. For a while I get humiliated, hurt. And remember, I was a young woman in a trade union with so many men. You can imagine what I must have gone through. But I had a strong husband who protected me. I have a bad memory so I forget both the good and the bad and I get a good night’s sleep. My general health is also OK.

I’m quite selective and don’t take up things which are not relevant to SEWA as an organisation. My personal life is also very simple. I don’t attend weddings and other ceremonies. I buy my clothes once a year. I have a domestic help who cooks. But all of us wash our own clothes.

R.S: One last thing, Ela ben. This interview will come out in the issue of THE EYE that is also part of a larger project that is involved with the 50th year of India’s independence. You were there when we got it and you have lived to see fifty years of India’s nationhood. What does your wisdom tell us on this occasion? Do you have a message that can tide us over the next twenty-five years at the least? We have found ourselves catapulted from being a rather laid back civilisation to a bustling nation. There is much agony and confusion as we go on with our lives.

E.B: I’m not a person to give any kind of message. But I can certainly say, in my simple way, that what we have forgotten is our old samskara of thinking about the other person before yourself. And this, in a broader sense is what is at the root of democracy. Sadly, the middle class that have upheld some sort of moral order has become so selfish. I think, as I understand it, the role of the middle class was to transform feudal society to a democratic one. And that role has been relinquished by this class.

E.B.: It was the middle class more than the working class who took part in the freedom struggle who sacrificed, who inspired others. They really should play a role in the transformation of society and to develop democratic values. I don’t mean just electing a populist government. I mean, in your family, neighbourhood, public place, school, everywhere. This is good samskara, good khandaan and good culture. I remember my mother; whenever these garment dealers came home, she would give them some jaggery and chickpeas. This was the rivaj, the custom. All these things are gone. At no time in history has there ever been complete equality. But good samskara, yes. Think of others always, that’s all I have to say.

What I understand is that the feminist point of view is a pro-woman thinking that leads to equality, but what I understand by empowerment of women is equality of opportunity according to their own capacities.

The membership may ask the leadership the same questions and vice-versa. These questions are constantly monitored not to see if they are adhered to but whether they are relevant. When the answer is a unanimous yes then we know that our direction is right.

Electoral politics is very very selfish. When the informal sector is not organized they cannot demonstrate their political strength with a common voice and change the balance of power.

Gandhi said that in the fight for social justice where the weapons are truth and non-violence women are the natural leaders.

Whenever there is confusion in my mind I look inside of myself for answers. The answer inevitably is, go for whatever cements and binds, not for something that divides.