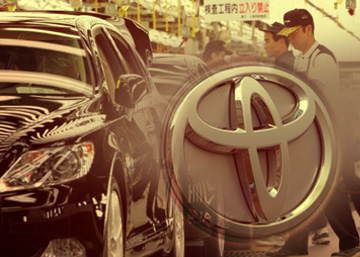 What we’ve learned is that the soft stuff and the hard stuff are becoming increasingly intertwined. A company’s values – what it stands for, what its people believe in – are crucial to its competitive success. Indeed, values drive the business.

Toyota Motor Corporation, the Japanese automobile company is a great innovator in modern manufacturing. Lean Manufacturing (LM) is an offshoot of the famed Toyota Production System, TPS. Toyota is not secretive about its TPS; it is open to scholars, executives, entrepreneurs or even competitors who want to study or understand its concepts and practices. Many management scholars and researchers have made extensive studies on TPS. But still, very few companies, and none of Toyota’s competitors, were able to entirely replicate the TPS with the same effectiveness. This is because Toyota Production System is not merely a technical “system” but a production culture driven by values. This article is not an exhaustive study of TPS but only a brief review of some of its people-centric values.

The Soft Side of TPS

The Toyota Production System is a topic of extensive study and research by management scholars. One such study is an article in Harvard business Review, by three Japanese management scholars, Hirotak Tekeuchi, Emi Osona and Norihiko Shimizu.(1) This article is a must-read for those who want to understand the human dimensions of TPS because it is the result of a meticulous and detailed research spread over many years. As the authors of this article describe the nature of the study:

“We studied Toyota for six years, during which time we visited facilities in 11 countries, attended numerous company meeting and events and analyzed documents. We also conducted 220 interviews with former and existing Toyota employees ranging from shop floor workers to Toyota’s president.”

This article begins with the statement, “No executive needs convincing that Toyota Motor Corporation has become one of the world’s greatest companies because of the Toyota Production System, TPS.” What is the secret behind the fabulous effectiveness of this marvel in manufacturing? There is the technical side of TPS, like lean manufacturing (LM), Just-in-Time inventory, simultaneous engineering and others, which can enhance the efficiency of systems and processes of the work-place in any industry. Many of the Toyota’s competition such as Chrysler and Ford and also many service industries like hospitals and retailers have applied the concepts and practices of LM for maximizing efficiency.

We must note here that the technical side of TPS or LM is only a more advanced version of the efficiency techniques of Taylorism. But efficiency of LM alone cannot account for the inimitable effectiveness of TPS. There is the soft human touch. In Toyota, human resource development, especially the development of shop-floor workers, is not something relegated to the HRD division; it is a continuous ongoing and intrinsic process of its work-culture, diffused into every level of the corporate hierarchy. Learning by experimentation, problem-solving and continuous improvement is an integral part of the job of every Toyota employee or worker. Everyone from the top executives to the shop-floor supervisor has the responsibility to coach and “develop” her subordinates. In another article on TPS in Harvard business Review, Stephen Spear and Kent Bowen state:

“All the organizations we studied that are managed according to the Toyota Production System share an overarching belief that people are the most significant corporate asset and that investments in their knowledge and skills are necessary to build competitiveness. That’s why at these organizations all managers are expected to be able to do the jobs of everyone they supervise and also to teach their workers how to solve problems according to the scientific method. The leadership model applies as much to the first-level supervisors as it does to those at the top of the organization. In that way, everybody at Toyota shares in the development of human resources. In effect, there is a cascading pathway for teaching, which starts with the plant manager that delivers training to each employee.” (2)

Many companies repeat like a parrot, “Our people are our greatest assets” but do not take it seriously and quite often behave in an exactly opposite way like for example, when they indulge in indiscriminate layoff at the slightest of environmental pressures. But Toyota takes its human assets very seriously and develops them in a scientific, systematic and methodical manner and still holds on to that traditional value of Japanese management, life-long employment and never resorted to layoff or downsizing.

Toyota is a world-leader in advanced manufacturing technology. But the primary emphasis of TPS is not on technology but on developing people and serving the customer. All good and successful company do this with various levels of effectiveness because these two factors, people and customers, are the primary source of organizational effectiveness. But Toyota does it in a way which is very different from most of the companies in the West. In brief, it is this unique people-centric culture which is the main factor behind the success of TPS as Takeuchi and his co-authors explain:

“People often ask ‘tell me one thing I should learn from Toyota’, that misses the point. Emulating Toyota isn’t about copying anyone practice; its about creating a culture. That takes time and it’s not easy.”

What then is the use of studying TPS? Emulating the TPS culture may be difficult but not impossible if there is sufficient long-term commitment to it from top management. And it is worth trying if it can bring some of the formidable, world-beating effectiveness to the company which makes the effort. Let us now examine briefly some of the values and principles of TPS:

The central core of TPS is the Toyota values, which includes the mind-set of continuous improvement; respect for people and their capabilities; teamwork; humility; putting the customer first; importance of seeing things first hand; and finally the broad mission, which is described briefly as:

“We are always optimizing to enhance the happiness of every customer as well as to build a better future for the people, society and the plant we share. This is our duty. This is Toyota.”

These are the core values which drive Toyota and its Production System. These values or beliefs are not mere pious statements paid lip-service in company vision-statements or Director’s speeches. They are inculcated into the consciousness of Toyota’s employees, both individually and collectively, through on-the-job training, off-the-job education programmes, stories, mentoring, case studies and examples. They are lived in action in every activity of employee’s work-life.

In Toyota, workers and executives are assessed and rewarded not according to the results but how they achieved the results in harmony with the Toyota values. The following factors are some of the parameters for assessing employees in Toyota:

Personal magnetism which means not just charisma, but how much trust and respect a manager commands from his subordinates.

Willingness to listen and learn from others.

Comfort in working with teams.

Ability to take action quickly to solve a problem.

When a Toyota employee is promoted, he or she is not praised but told something like this: “Congratulations. But remember you are selected for promotion from a group of your colleagues who are as much competent as you. Remember also that your success is not entirely due to your own personal achievements but in part is the result of efforts of your equally accomplished colleagues.” In other words, the promoted employee is told humility and teamwork are much more valued here than pride of personal achievement.

Toyota still holds on to life-long employment, which is now regarded as out-of-date by many management thinkers. This is one of the traditional values of Japanese companies. But many companies in Japan, abandoned this humane practice under the competitive pressure or influence of western corporate culture. But Toyota is firm in its commitment to people. During the 1997 Asian financial crisis, Toyota’s Thailand operations suffered four straight years of losses. There was a strong pressure for downsizing. But order came from the very top, from the then President of Toyota, Hiroshi Okuda, “Cut costs but don’t touch people.” Later, Moody lowered Toyota’s rating citing its life-long employment policies, which increased Toyota’s interest payments by $ 220 million a year. But Toyota refused to buckle under pressure and told Moody that it would not abandon its commitment to people. This is in stark contrast to many companies in the West which indulge in indiscriminate downsizing justifying with some high sounding jargons like “restructuring or downsizing” or finding rationalizations like “We cannot guarantee job security but can only provide employability.”

We must note here that Toyota’s humane and compassionate people-management practices have not in anyway undermined its competitiveness or the bottomline. Toyota still remains one of the most innovative and profitable automobile companies in the world. This shows how hollow some of the arguments put forward in favour of downsizing like for example it is necessary or inevitable to survive in a corporate environment driven by fast-change, fierce competition and rapid technological progress. Toyota also operates in this environment but it is not only just surviving but prospering splendidly with a world-beating performance. Interestingly, a series of latest research studies on downsizing indicate that its benefits in terms of productivity or profit is illusory and its impact on the morale, motivation and well-being of employees are devastating. In an article in Newsweek, Jeffrey Pfeffer admirably sums up these new researches on downsizing and concludes:

“The facts seem clear. Layoffs are mostly bad for companies, harmful for the economy and devastating for employees. There is substantial research literature in fields from epidemiology to organizational behaviour documenting these effects.”(3)

Mentoring Relationship between Superiors and Subordinates

The relationship between the boss and the subordinates in TPS is based more on mentoring than on controlling. In Toyota, the boss or the supervisor is not a commander who demands obedience but she is more of a coach, helper, teammate and a senior comrade who is trusted and respected for her human qualities rather than for her position or authority. Another character of this relationship, which is a Toyota special, is the tolerance for contrary opinions or even disobedience. Expressing opinions contrary to that of the boss or not obeying her instructions are acceptable behaviour in Toyota culture. As Takeuchi and his coauthors state: “Contradicting your boss is acceptable; brining bad news to the boss is encouraged; and ignoring the boss is even excused.” They give the example of a Toyota executive who was posted to one of the US operations of Toyota. His bosses told him to increase the number of outlets. But the executive, after assessing the market condition, felt that if he did what his bosses told him it would increase competition and make dealer-management difficult. So he simply ignored the instructions of his bosses. In other words, the relationship between superiors and subordinates in Toyota is human, informal and familial and not entirely hierarchical based on formal authority.