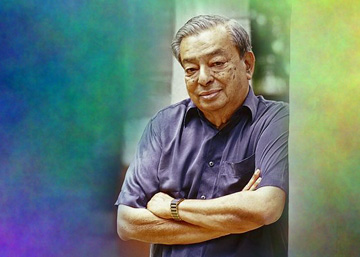 Can one of the poorest nations in the world become the largest producer of milk in the planet? Dr. Verghese Kurien former Chairman of the National Dairy Development Board showed it is possible. As a professional accomplishment, such achievements are not entirely unique or rare. It is not very difficult to achieve such professional feats through a combination of ruthless target-oriented efficiency, cold-hearted management and soulless technology. What makes Kurien’s accomplishment unique is the way he achieved it – through values, compassion, community, people but at the same time using best technology and management at the service of these higher values.

Dr. V. Kurien’s autobiography shows how ethico-moral competence, as a foil to professional competence, is not an exercise in fanciful idealism. He emphasizes the point, early in the book, and correctly at that, that integrity unto one’s own self is a pre-condition to integrity in dealings with others. Probably the most telling example of this principle in action was in his confrontation with Jagjivan Ram, a heavy-weight central minister and astute politician of his times. The latter had summoned Kurien to help set up a private dairy with funds drawn from the cooperative dairy system. He refused to oblige, and therefore had to bear the brunt of the minister’s wrath. But he had the requisite ethical stamina, so did not buckle.

Two fundamental philosophies could govern our lives. One emphasizes that an individual should run after name and fame. This may be called ‘ambition’. The other prefers name and fame to run after an individual who concentrates fully on duties at hand. This is ‘dedication’. For those inspired by the latter, the life of Kurien could serve as a model. In a letter to his grandson he wrote:

“To be quite honest, service to our nation’s farmers was not the career I had envisioned for myself. But somehow, a series of events swept me along and put me in a certain place at a certain time when I had to choose between one option or another. I was faced with a choice that would transform my life. I could have pursued a career in metallurgy and perhaps become the chief executive of a large company… Yet, I chose none of these because somewhere, deep down, I knew I could make a more meaningful contribution by working here in Anand, Gujarat.”

The message above is that it was not a calculated move by him to earn more money or position. It was an intuitive decision impelled by a higher cause. Reward and fame followed him in due course.

In the same letter, reflecting on the values which stood him in good stead, he held ‘personal integrity’ to be most important. He has stressed.

He follows it up later in the book with two more values:

(a) to lead by personal example
(b) respect for time

Kurien has amply demonstrated the above values in his career and life. One such incident occurred in connection with the mopping up of the mess (corruption) in the Delhi Milk Scheme within forty-two days, and making it a new brand. He did this even at the risk of making enemies in Delhi’s corridors of power. Thereby, he initiated a complete turnaround in just six weeks, leading from the front.

There is yet another important learning from the same Prologue/letter. He reflected,

“Yet, there is little correlation between circumstances of people’s lives and how happy they are. Most of us compare ourselves with someone we think is happier… But when we start looking closely we realize that what we saw were only images of perfection. And that will help us understand and cherish what we have, rather than what we don’t have.”

This is a more sound and realistic principle of happiness. It is indeed true that a major cause of unhappiness is comparison with others in terms of what we do not have (money, fame, status in organization etc.), instead of what we have and others do not. Of course, it is not clear why the phrase ‘image of perfection’ has been used. Instead, ‘image of happiness’ would have been the appropriate expression. One should learn to feel happy by comparing oneself with persons less fortunate than oneself – who are more numerous than the few who are more so.

It is a common Indian belief that the higher Divine Will works for our good, though we may not be able to comprehend or evaluate it properly in the immediate. Kurien’s life has been no exception. In no uncertain terms he expressed his displeasure on being deputed by the Government of India to the National Dairy Research Institute at Anand. He had big dreams of leading a luxurious life, and in no way Anand suited his temperament. He hated Anand. But he had to accept the posting because the government had spent for his higher education in the USA. As destiny would have it, he came in contact with, and was intrigued by a band of tenacious dairy farmers and their leader – Tribhuvandas Patel. Gradually he fell in love with Anand. He quit the government job and joined the Kaira Milk Cooperative. The rest is history. Now he wants that even his body be cremated in Anand only. This evolving sequence of events shows that the grand design of Providence cannot usually be comprehended through secular rationality only. Kurien apparently, possessed no such outlook on life.

The chapter on ‘History in the Making’ (in Kurien’s autobiography) refers to an interesting incident involving achharya jyotishi who had predicted a phenomenal rise in Kurien’s career. He, although a non-believer in occult matters, admitted that this prophecy had indeed turned out to be true. However, he also added that it was, ‘… one of life’s curious accidents’. Such a remark about the jyotishi’s accurate prophecy smacks of uncharitableness towards a capacity which is as thorough as any other. Rather, this experience in Kurien’s life substantiates what has been said in the previous paragraph: the inscrutable providential umbrella overhanging our terrestrial affairs.

There is an English phrase ‘living for others’ which has been called in the Bhagavad Gita as, sarva bhuta lute ratah or lokasmagraha. Kurien’s philosophy of life epitomizes this. He avers, ‘… but if you work for others, there is a deeper sense of fulfillment, and if things are handled well, the money too is more than adequate.’ The last part of the statement refutes a common argument that a life lived for an ideal necessarily implies sacrificing material goals. Similar views have been echoed by him elsewhere also like:

‘I chose to remain in Anand, as an employee of farmers, all my life’

‘…an employee of farmers has to please only the farmers’

Nowhere has it appeared that Kurien had been a discontented man, not satisfied with his life and its myriad circumstances.

At one place Kurien provides sound insight into cohesive teamwork. Three men were at the helm in running the Kaira Cooperative: Tribhuvandas Patel (the person representing the dairy farmers), Mr. Dalaya (a colleague of Kurien) and Kurien himself. However, as Kurien added, the three had, ‘…distinctly different manners and skills’. Yet they formed a cohesive team because of, ‘…tremendous respect for the integrity and the strength of the other two’. This enabled them to find solutions amicably, instead of falling apart over different viewpoints they had. This quality is called mudita in Patanjali’s Yogasutras.

Kurien had no hesitation in exposing the business motives of the MNCs. Generally bureaucrats and leaders in India, for their own reasons, are found to ignore or join the dirty games played by many MNCs. But he bluntly observed, ‘…the technical advice of ‘experts’ is all too often dictated by the economic interests of the advanced countries and not by the needs or ground realities in developing countries’. Later in the chapter ‘From organization to Institution’ he highlights another incident: a heated altercation with the chairman of Nestle whose dealings were bordering on bullying tactics commonly adopted by the MNCs. Kurien retorted,

“I’ve been in this game for fifty years and I know your modus operandi well… You want to buy him (Kurien himself) out, which is what you’d normally do. But you can’t buy me out…”

Whenever situations demanded he used to rise to the occasion and face it resolutely. He observed, ‘…with adequate support, confrontation at the right time pays off’. Accordingly, he had confronted the UNICEF when it wanted to dictate terms over the kind of powder plant the cooperative desired, although its role was to offer financial assistance only.

The ruling gospel – ‘fast and steady wins the race’ – in the corporate sector has been contested by Kurien in terms of long-term sustainability. He believes that the philosophy of the Cooperative is to progress in a ‘slow and steady’ manner. Patience has been his watchword. However, he candidly admitted that the advantage with the co-operatives lay in the fact that they had no compulsion to placate either the shareholders or any boss by making profits their raison d’être.

Obsessive love for power is widely prevalent among individuals and groups. So, whenever there is a remote possibility of losing grip over it, the wielder of power feels threatened. This is exactly what had happened after Lal Bahadur Shastri, the – then Prime Minister of India, expressed his intention to Kurien thus:

“The Government of India will give you a blank cheque, you may create any body, any structure you want, provided you will head it. Please replicate Anand – throughout India… whatever you need for it, the Government will provide.”

On the basis of this proposal it was decided to establish the National Dairy Development Board (NDDB). However, it met with stiff resistance as the bureaucrats belonging to the Ministry of Food and Agriculture felt that this proposal was unfair and an insult to them. He therefore confronted them. Afterwards Kurien, probably hinting at this group of bureaucrats, had observed,

“…it was power that we exercised prudently over those who tried to expand our country’s imports unnecessarily… by their corrupt practices (they) held the country back from true development.”

Nowadays the phrase ‘holistic approach’ is in wide circulation. However, what it means to be holistic is not often well-understood. The success of Operation Flood, which had ushered in the White Revolution in India, may throw some light on it. When the idea of Operation Flood was floated, it met with criticism from certain quarters who questioned its feasibility. Kurien realized that in part this was honest criticism because India could never afford to provide one acre of green grass to each cow or buffalo for it to give 40 litres of milk each day. This prompted him and his team of researchers to research on animal feed, health and nutrition. Such an integral approach enabled them to ensure, ‘…that our milk production should come from fodder and feed which man could not eat… (and which) was produced in the process of producing food for human beings’. Thus, it was proved to the detractors that the NDDB was formed, not for dairy development through milk production only, but also for ‘holistic’ development through proper care of allied aspects like animal husbandry, feed, fodder etc.