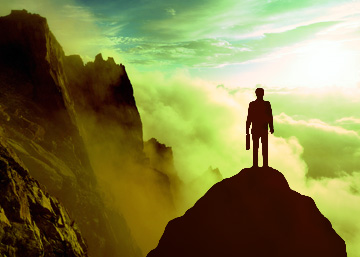 Individuals who will steer the humanity towards its spiritual destiny.

The future leaders will recognise the need for spiritual transformation and strive to give a total spiritual direction to every activity of life.

The individuals who will most help the future of humanity in the new age will be those who will recognise a spiritual evolution as the destiny and therefore the great need of the human being. Even as the animal man has been largely converted into a mentalised and at the top a highly mentalised humanity, so too now or in the future an evolution or conversion – it does not greatly matter which figure we use or what theory we adopt to support it – of the present type of humanity into a spiritualised humanity is the need of the race and surely the intention of Nature; that evolution or conversion will be their ideal and endeavour. They will be comparatively indifferent to particular belief and form and leave men to resort to the beliefs and forms to which they are naturally drawn. They will only hold as essential the faith in this spiritual conversion, the attempt to live it out and whatever knowledge – the form of opinion into which it is thrown does not so much matter – can be converted into this living. They will especially not make the mistake of thinking that this change can be effected by machinery and outward institutions; they will know and never forget that it has to be lived out by each man inwardly or it can never be made a reality for the kind.

They will adopt in its heart of meaning the inward view of the East which bids man seek the secret of his destiny and salvation within; but also they will accept, though with a different turn given to it, the importance which the West rightly attaches to life and to the making the best we know and can attain the general rule of all life. They will not make society a shadowy background to a few luminous spiritual figures or a rigidly fenced and earth-bound root for the growth of a comparatively rare and sterile flower of ascetic spirituality.

They will not accept the theory that the many must necessarily remain for ever on the lower ranges of life and only a few climb into the free air and the light, but will start from the standpoint of the great spirits who have striven to regenerate the life of the earth and held that faith in spite of all previous failure. Failures must be originally numerous in everything great and difficult, but the time comes when the experience of past failures can be profitably used and the gate that so long resisted opens. In this as in all great human aspirations and endeavours, an a priori declaration of impossibility is a sign of ignorance and weakness, and the motto of the aspirant’s endeavour must be the solvitur ambulando(1) of the discoverer. For by the doing the difficulty will be solved. A true beginning has to be made; the rest is a work for Time in its sudden achievements or its long patient labour.

The thing to be done is as large as human life, and therefore the individuals who lead the way will take all human life for their province. These pioneers will consider nothing as alien to them, nothing as outside their scope. For every part of human life has to be taken up by the spiritual, – not only the intellectual, the aesthetic, the ethical, but the dynamic, the vital, the physical; therefore for none of these things or the activities that spring from them will they have contempt or aversion, however they may insist on a change of the spirit and a transmutation of the form. In each power of our nature they will seek for its own proper means of conversion; knowing that the Divine is concealed in all, they will hold that all can be made the Spirit’s means of self-finding and all can be converted into its instruments of divine living. And they will see that the great necessity is the conversion of the normal into the spiritual mind and the opening of that mind again into its own higher reaches and more and more integral movement.

For before the decisive change can be made, the stumbling intellectual reason has to be converted into the precise and luminous intuitive, until that again can rise into higher ranges to overmind and supermind or gnosis. The uncertain and stumbling mental will has to rise towards the sure intuitive and into a higher divine and gnostic will, the psychic sweetness, fire and light of the soul behind the heart, hrdaye guhayam, has to alchemies our crude emotions and the hard egoisms and clamant desires of our vital nature. All our other members have to pass through a similar conversion under the compelling force and light from above. The leaders of the spiritual march will start from and use the knowledge and the means that past effort has developed in this direction, but they will not take them as they are without any deep necessary change or limit themselves by what is now known or cleave only to fixed and stereotyped systems or given groupings of results, but will follow the method of the Spirit in Nature. A constant rediscovery and new formulation and larger synthesis in the mind, a mighty remoulding in its deeper parts because of a greater enlarging Truth not discovered or not well fixed before, is that Spirit’s way with our past achievement when he moves to the greatnesses of the future.

1. The answer of Stephenson to those who argued by strict scientific logic that his engine on rails could not and should not move, “Your difficulty is solved by its moving.”