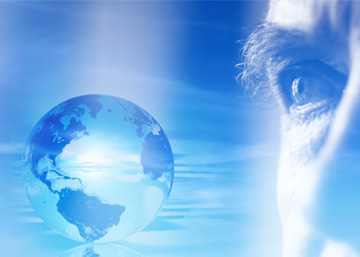 How important is ‘Vision’ for an organisation and for the individual.

When we trace the creative source of a civilization, culture or organization which endured long and achieved greatness, we will find at its source a great vision of a visionary leader(s). But a vision is in its essence an idea or a thought. How can a thought be so creative to build a nation? This article examines this question and its relevance to human development in the light of Indian spiritual thought.

I want to know God’s thoughts; the rest are details.
– Albert Einstein

The importance of “vision” for the long-term effectiveness of an organization is now well-recognized in business and management thought. A clip from “Fortune” magazine states:

“Executive recruiters asked, what qualities their client companies are seeking in a candidate for a top job, report that they are hearing our old friend ‘charisma’ more than they used to. ‘Vision’ also seems in increasing demand: while the head-hunters aren’t sure precisely what the term means, they sense that it has to do with new and much sought-after skills in motivating people” (1)

But what is exactly the meaning given to the term ‘Vision’ by modern management-professionals? McKinsey consultants, Hickman and Silva, in their book “Creating Excellence”, explain the meaning of vision:

“What do we mean by Vision? Essentially a vision is a mental journey from the known to the unknown, creating the future from a montage of current facts, hopes, dreams, dangers and opportunities. Just as the mental journeys of Thomas Jefferson and Karl Marx guided nations such journeys can dictate the success of business; and just as nations must adapt their original vision to changing conditions, so must corporate leaders mould their vision to keep pace with a rapidly evolving world.” (2)

The same authors declare categorically that “Vision determines Success and Failure” and conclude: “Executives with clear vision invent excellent futures for their firms: those who lack it set their companies adrift in dangerous waters”. (3) This means the “soft” factors-life, philosophy, vision and values-have a “hard” pragmatic force. So the modern pragmatic mind is beginning to realise the truth which the Mother of Sri Aurobindo Ashram expresses with a sublime simplicity: “To be practical, you must have a very clear vision of the goal, of where you are going” (4)

But the pragmatic mind of the West is not interested in any further investigation of the deeper truth and law behind this creative power of visions. It has found by an empirical and scientific investigation of the experiences of successful leaders that “Vision works”. But it is not interested in the why and how of the phenomenon. The Indian mind is not satisfied with this pragmatic truth. It is more deeply scientific than the pragmatic mind of the West. It wants to know why and how vision works or what are the spiritual and psychological truths which make the vision creative.

Such an enquiry may not have immediate pragmatic results. But in the long term it may have an immense pragmatic utility for the individual and the collectivity. For, once the deeper truth and law and process of a phenomenon are fully understood, they open the possibility for evolving a discipline by which we can gain conscious control and mastery over the process. And for the collectivity it can help the top decision-makers in government business and administration to choose the right type of vision, with the highest creative potential, for the nation or the group. Here comes the importance of Indian spiritual insights in understanding the deeper truths of creative visions.

Let us begin from the basics. What is a vision? Vision is creative dreaming; it is, in the human mind, thought working through imagination to grasp at a future possibility. Creative visioning requires the capacity for sustained, coherent and conscious dreaming, which means to visualise the future goal, aim or the ideal and the path to realise it in the clearest possible terms.

According to the Indian spiritual tradition, the entire world is a dream of God, not in the sense of its unreality, but in the sense of it being a creative idea in the consciousness of the divine Self, Spirit or God, His divine vision materialised in force and energy. But this creative idea of God is not a mental idea; it is a supramental spiritual idea in the creative consciousness of the spirit, what Sri Aurobindo calls a Real-idea, in which knowledge and will, conception, execution and realization are a single indivisible movement. It is this spiritual idea, which determines the deepest truth, law, purpose and destiny of each individual existence in the universe – each being, species, group, object, phenomenon or activity – and governs its evolution according to its truth and law. We can say that this spiritual idea is God’s vision and will in each individual thing in the universe, governing its evolution according to the truth of its being and the inherent and natural law of its evolutionary curve of growth.

The creative power and effectiveness of a human vision or idea is in proportion to the extent to which it faithfully reflects, participates in or identifies with God’s creative vision. Since human mental consciousness is a limited and partial expression of the creative consciousness of the spirit, even the mental idea or vision is not entirely an abstraction but has a force of effectuation inherent in it. As Sri Aurobindo explains: “all ideas are forces and have a formative and self-effective faculty.” (5) All the great ideals perceived by the higher mind and aspiration of humanity, like for example liberty, equality and fraternity of French Revolutions, contain some reflection of the Real-idea of God or “God’s thoughts” in them. But, in the human mind, knowledge and will or the powers of conception and execution are not in perfect unity and harmony as in the creative consciousness of the Divine. So the creative power of a human idea or vision is very limited in comparison with that of the supramental consciousness of the spirit. But still the mental idea and vision also has a creative force and its effective power depends on the extent to which it reflects the Real-idea of the spirit.

The mental idea can be used as a means to realise the spiritual truth behind the idea. By a process of concentrated dwelling of the thought and will on the idea we can get behind the idea into the spiritual truth which gives birth to it in the mind. This is the principle of the traditional Indian method of meditation taught by ancient masters of Yoga like Patanjali. This is the meaning of the Sanskrit word Tapas; it is the method by which the human consciousness can rise beyond mind into the spiritual consciousness; it is also the method by which the Divine unrolls the world in His consciousness. The work of the visionary, thinker, prophet and sage is to discover the highest truth of life, nature and the world by Tapas and release its creative force into the world through the inspired Idea and the Word.

This brings us to the subject of different kinds of vision. Some of them embrace the whole of life and existence; others are sectoral visions covering only an aspect of life or a group or a nation. Vision may originate from different levels of human consciousness-physical, vital, mental and spiritual. Visions of great men of action in economics, society and politics are mostly sectoral visions of the pragmatic vital mind. Most of the successful leaders in these fields are either consciously or subconsciously in tune with the truth and law and rhythm of the vital forces of Nature. This gives them a “gut-feeling” into the gestalt of their specific field of action.

The vision of intellectual thinkers and philosophers proceeds from the thinking mind. The vision of a sage or spiritual man proceeds from the spiritual consciousness. This nature of the source or origination is another factor, which determines the creative power of a vision. The spiritual vision of a sage has the highest creative power because it more or less participates in the creative vision of God and releases a spiritual force which, as Sri Aurobindo points out, “… not only creates the future but creates the material for the future. It is not limited to the existing materials either in their nature or in their quantity. It can transform bad material into good material, insufficient means into abundant means”. (6)

So all visions are not creative or equally creative. All fanciful dreaming are not creative visions. To be creative, a conception must be clear and coherent, based on a deep insight into the truth and law and nature and destiny of things. Every great creative vision of an ideal, which is in harmony with the truth and law and destiny of things inevitably, realizes itself. As Sri Aurobindo states: “The ideal creates the means of attaining the ideal, if it is itself true and rooted in the destiny of the race.“ (7) If, along with this, the vision or ideal is an integral part of a greater global vision of life seen, realised and projected from a spiritual consciousness, it has an enduring creative power, which can make and remake a nation. Whenever such a spiritual vision is awakened and activated in the consciousness and life of a nation, it will be followed by a great national renaissance and create a new era of all-round progress and prosperity for the nation.

This is the reason why the Indian philosophical tradition emphasized that all thinking and philosophy have to be based on an authentic spiritual intuition, experience or revelation. If the thinker or philosopher doesn’t have this spiritual intuition he must be humble enough to base his thinking on the intuitions of wiser men or women of the past or present who have this spiritual wisdom and realisation. In the next issue we will discuss how to implant the vision in the soil of human consciousness and make it into a creative force for action.