Fourth Dimension Inc. > Leadership > The Leader and the Organiser 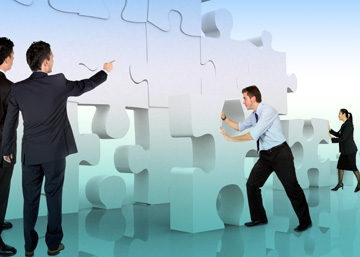 Some modern management thinkers make a distinction between a leader and a manager. A leader is someone who can inspire people with a compelling vision and purpose. The manager is more of an organizer or coordinator with a greater focus on details of execution. In this article the author examines this distinction from a deeper spiritual perspective.

Plato spoke of the philosopher-king. He called for a monarch who was also a man imbued with wisdom, not just valour. Let us note that he did not mean that a philosopher should take the reins in his hands. Philosophers are reputedly out of touch with realities, their heads are in high clouds, – say the critics. And perhaps there is some truth in their charge. Anyway, we are thinking of kings with the maturity of wise men. The ancient Aryan society always coupled the sovereign power with spiritual guidance. The kings always consulted the sages in difficult situations. The point is that he or those at the head of affairs should function at a higher level of consciousness.

This principle, however, has got clouded with the advent and spread of the institution of political democracy. Admittedly the level of the demos is always pretty low. Things come to be decided at a popular level which means that expediency, opportunism, sharing of spoils, have a heyday. The merit of a question hardly comes into the picture. Standards come down, values are given the go-by and collective progress suffers a set-back.

Experience and practical wisdom, however, point to the need of reaffirming the old principle: one who heads must have a consciousness which is higher than that of the most. He must be one who has exceeded his individual ego: his preferences, his insistences, his personal mould. He should have something of a universal consciousness which embraces the interests and aspirations of all who come under his management. He must be both wider and higher than the rest. It is only then that he can be trusted to strive for the collective welfare and carry others with him. He must identify himself with the true interests of the community and not let his own personal preferences interfere. He should be able to set these aside. In other words he must be able to forget himself. Of course it does not mean that he should be just a mouth-piece for the commonalty. He should be a leader whose consciousness is above all manipulation, strong enough to impose itself correctively, warm enough to gain the acceptance and loyalty of the right-thinking elements.

Only such an individual with a broad, high consciousness can fruitfully organise and lead a collectivity. All other considerations, viz. wealth, skill, vital power, are irrelevant. They can only repeat the old fiasco. Let us also remember that a man with such a higher consciousness will not demand position. It goes to him naturally if there is no extraneous interference. In any case all turn to him inwardly.

However a community or an organization needs not only leaders but also organizers. They are needed to coordinate, focalise, harmonise. The task of organising calls for different qualities than governing.

To be a successful organiser, one must be first free from desires. It is well known how desire vitiates things in advance. It predisposes the individual in the direction that best serves the fulfillment of the desire. It interferes with right judgment. It blinds one to factors that are inconvenient or stand in the way of following out the desire. The desire need not be of a personal nature. It may be ideological, it may have a religious taint. It stands in the way of fair appraisal of situations.

There should be no preferences either. To have a special liking for a particular course or approach prevents a dispassionate study of the various possibles that offer themselves. Similarly to have strong dislikes and prejudices imposes a handicap. This negative attitude may relate to persons or methods. In either case it limits the area of objectivity and freedom of choice. One needs to examine oneself severely in order to be sure that there is no inbuilt attraction or repulsion that prevents the full utilisation of the opportunities.

A successful organiser in this context must develop a perfect equality. There should be no personal considerations which incline him in one-way or other. An impersonal approach is needed. It is only in the measure in which he considers and assesses each development in its full significance without being influenced by any sentiment or extraneous factors that he succeeds in inspiring confidence in his co-workers.

And above all is the question of sincerity. There should be no gap between his professions and practice. He must mean what he says and do what he expects others to do. Sincerity in one has the power to inspire sincerity in others, at any rate in the long run. Any insincerity cuts across the credibility of the person and holds up progress. A successful organiser wins the confidence of others and evokes the best in them by his sincerity.

M.P. Pandit is a well-known exponent and practitioner of Integral Yoga. He is also a prolific writer who has authored more than two hundred books, mainly on Yoga and Indian Culture.