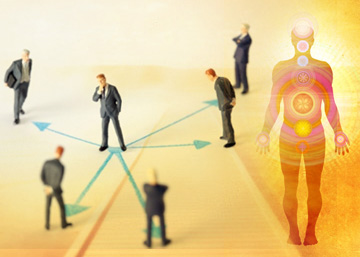 The perfection or transformation achieved by human ethics and morality is limited and uncertain. The higher perfection which leads to flawless action in harmony with the higher laws of life can be achieved only in the spiritual consciousness.

Limitation of Ethics; an illustrative story on the difference between the limited outlook of the moral mind and the deeper vision of spiritual consciousness.

One of the great confusions of modern thought is the lack of clarity on the distinction between ethics and spirituality. Ethics and moral excellence or strength of character is normally associated with spirituality. Ethical excellence or perfection is undoubtedly an indispensable preparation for spirituality. But the ethical consciousness is not the highest potential in man. Our highest well-being and fulfillment lies only in the spiritual consciousness, which is beyond the ethical. But the spiritual is supra-ethical and not unethical or infra-ethical. We cannot attain the spiritual without passing through the ethical. Another important factor to be noted here is that the ethical being or what is called the “conscience” is not the ultimate source of higher values. The ethical being or conscience is a mixed combination of a mental construction formed by the values imparted through education and environment with a dim ray of light falling on it from the Spirit. This is the reason why in all man-made ethical system there is always the mixture of the relative and the universal. The element of relativity, what is called as “relativity of values” comes from the variation in education and environment. The universal element comes from the ray of light of the Spirit.

Because of this mixed nature of the ethical being, it doesn’t have the unerring insight into the truth, right or goodness of each situation or circumstance. Moreover since the ethical being is part of the mental consciousness in man, which can see or know only slices or aspects of truth or life and not the whole, it doesn’t have the integral vision of life. The action of the ethical being is based on some fixed principles of life like non-violence, truth or love and may ignore other values or ignorant of the more pragmatic realities, principles or laws of life. For example, it may tend to be too lenient, saintly or sentimental when the actual situation demands firm and strong measures or else it will be rigidly puritanical when the situation requires a liberal flexibility.

A strong and one-sided religious or ethical sentiment can cloud the perception of facts and lead to wrong decisions, actions or dealing with life, sometimes culminating in national calamities, like for example the partition of India. When the allied forces under the able leadership of Churchill were fighting to save the world from the demoniac might of Hitler, Mahatma Gandhi gave the following astonishing message to British people.

“I want you to fight Nazism without arms, or if I aim to retain the military terminology, with non-violent arms. I would like you to lay down the arms you have as being useless for saving you or humanity. You will invite Herr Hitler and Sigmor Mussolini to take what they want of the countries you call your possession. Let them take possession of your beautiful land, with your beautiful buildings. You will give all these but neither your souls nor your minds. If these gentlemen choose to occupy your homes, you will vacate them. If they do not give you free passage out, you will allow yourself, man, woman and child, to be slaughtered but you will refuse to owe allegiance to them.”

The main problem here is that while the situation demands the dharma of a righteous warrior or hero, Mahatma Gandhi was preaching the dharma of a saint. Another example is Subhash Chandra Bose who is a great leader of the Indian freedom movement and a man of impeccable character. He sought the help of Hitler for bringing freedom to India. In his passionate patriotic fervour, he was not able to see the long-term consequences of his action. He didn’t ask the question, suppose India wins freedom with Hitler’s support how long she can remain free from the military might and global ambitions of Hitler? Similarly, a strong dogmatic religious sentiment can blunt the ethical instinct. The medieval Christian father, who burned and tortured “heretics”, believed it was a pious act. The jihadi terrorist feels no moral compunction in killing people because he believes he was fighting for bringing the Kingdom of God on earth.

All these defects of the ethical being can be remedied fully only in the spiritual consciousness. Only in the consciousness of the Spirit there is a perfect experiential synthesis of all higher values and an unerring insight into the deeper truth of each situation and circumstance and what is truly good for each and the all. So to realize the highest human well being and fulfillment we should not rest satisfied in the ethical but proceed further beyond into the spiritual consciousness.

Here is a story and a dialogue, which is a free recreation of an episode in Mahabharata that illustrates the difference between the limited outlook of the moral mind and the deeper, broader vision of spiritual consciousness.

The scene is an episode in Mahabharata after the Kurukshetra War. The Dharmaraj was dismayed and tormented by the immense destruction and loss of lives wrought by the war. He felt that he was in some way personally responsible for the war. So, strung by a sense in of personal guilt and sorrow, decides to renounce the world and go to the forest to do penance. Sri Krishna meets him and here is the dialogue between Lord Krishna and Dharmaraj:

Sri Krishna: Dharmaraj, is what I hear true? Your brothers told me you have decided to renounce the world and go to the forest?

Dharmaraj: Yes, that is my decision.

Sri Krishna: What prompted you to take such a drastic decision?

Dharmaraj: I want to do penance.

Sri Krishna: For what?

Dharmaraj: For the War.

Sri Krishna: For the War? I don’t understand.

Dharmaraj: Sri Krishna, I feel I am somehow responsible for the war and all the destruction and bloodshed. So I have decided to go to the forest to do penance.

Sri Krishna: I don’t think it is a very wise decision. I would like you to reconsider it.

Dharmaraj: No Sri Krishna, it is a decision prompted by my conscience. I can’t go back on it.

Sri Krishna: Your moral conscience is not the deepest and highest indicator of the Right and True Dharmaraj. It is a construction of your ethical mind and social morality which are products of education, culture, environment and evolution. Conscience is an instinctive and spontaneous response of your personal moral temperament. Quite often the promptings of conscience are the result of a highly personal, self-centred and hypersensitive moral sentiment, sometimes hiding ignoble feelings like guilt, cowardice and escapism.

Dharmaraj: But Sri Krishna, I don’t have anything higher and better than my conscience.

Sri Krishna: You do have. You have to plunge deeper and beyond your mental and moral nature and come into contact with your divine Self.

Dharmaraj: I am at present too full of grief and sorrow for such deep contemplations Sri Krishna.

Sri Krishna: Then take a broader view. You are a King. Does not all the Artha shastras you have read tell you that a King should rise beyond all personal considerations and has to be solely occupied with upholding of the Dharma and the well-being of the community? Have you given some thought to what is your Dharma at present? You are tormented by the pain of a personal sense of guilt. But do you feel the pain of your people affected by war? Do you know how much they are deeply wounded physically and mentally by the war? Their life was totally dislocated by the war; most of them have lost their near and dear ones in war; a deep sorrow hangs over the heart of your people. It is your dharma as a King to heal their sorrow and help them get back to their normal life. If you want to do penance, this is the right way to do it and not by running away to the forest.