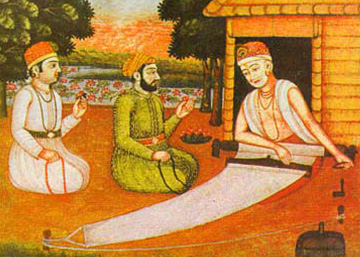 A well-known spiritual genius of India who was at once a weaver, householder and a Yogi showing to the world that there was no need to run away from life to a forest, hilltop or an ashram to achieve enlightenment.

Kabir Das, [1440-1518] the mystic and weaver is a famous saint of India. Not much is known about the birth of Kabir Das but according to historical records he was brought up in a family of Muslim weaver, who adapted the boy and taught him the weaver’s trade. Similarly, what path he followed was also not clear, except that he was the disciple of Ramananda and the amusing episode on how he tricked Ramananda to accept him as his disciple.

Kabir seemed to have followed a predominantly devotional path but it was very different from the traditional devotions cults of Hinduism. He called God as “Ram” but he was not a traditional Ram bhakta like Tulasidas and his Ram was not the hero of Ramayana but the name he gave to the ultimate and absolute Reality of life. According to scholarly opinion, Kabir was influenced by the “prevailing religious mood of his times, such as old Brahmanic Hinduism, Tantrism, the teachings of Nath yogis and the personal devotionalism of South India mixed with the imageless God of Islam.”(1) However, in Kabirdas, these influences seemed to be mostly mental rather than spiritual. Kabir might have used the terms, concepts and symbols of the religious and spiritual traditions of his age to express his own profound inner realisations, which are the true spiritual source of his teachings.

Kabir’s spiritual attainments are well-known. Rabindranath Tagore described Kabir as “one of the greatest spiritual geniuses of India.”(2) In his inner realisation he soared far beyond the rigid dogmas and limiting boundaries of traditional religion and attained union with the One Reality, transcendent and timeless, but also pervading the world and the indwelling divine in everyone. Kabirdas emphasised strongly and repeatedly on the path of interior spirituality to the indwelling divine in everyone and criticized sharply all forms of external formalism and everything that divides people on religious liens. As Kabir sings in a luminous verse:

Where dost thou seek Me? Lo! I am beside thee!
Neither in temple nor in mosque am I:
Neither in Ka’aba nor in Kailash!
I am not in outer rites and ceremonies.
I am by thee, with thee, within thee!

While many saints in India lived in a state of god-intoxication, Kabir spoke to the common man in a simple, rustic and powerful language, coming direct from his own inner experience and realisation of the divinity. He implored people to look within and discover the divinity within them. However, the most important part of Kabir’s life is that he is not a professional yogi but a yogi who found and lived God in the midst of his professional occupation as a weaver and leading the life of a householder with this family and children. As Sadhu Vaswani, the founder of Vaswani Mission puts it forcefully:

“Kabir was illiterate but illumined… Kabir was not an ascetic. He did not leave the world. His renunciation was inner and not outer. He mingled with us a man with man; he toiled, he recognised the sanctity of labour. He rejoiced in the interior-life of communion with the Supreme. Kabir blended mystical vision with industry. He believed in the harmony of hands and heart.”(3)

The path followed or taught by Kabirdas cannot be systematized. But we may identify four main tenets of his teaching:

1. Emphasis on the discovery of the inner divinity through inward contemplation.
2. Inner detachment from the world.
3. Clinging to truth under all circumstances.
4. Cultivating pure love for God, not the mutually exclusive gods of formal religion but the one God who is the inner source of all being and life.