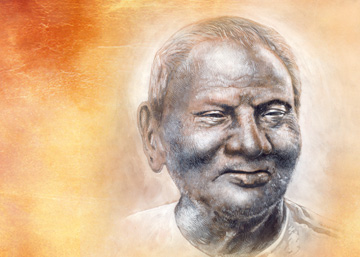 A modern sage who attained the highest level of enlightenment while living the life of a householder and trader.

Sri Nisargadatta Maharaj, [1897-1981] is a modern sage, who sought, found and lived the eternal Truth while trading in cigarettes. As this sage point out in simple words:

“My destiny was to be born a simple man, a commoner, a humble tradesman, with little of formal education. My life was the common kind, with common desires and fears. When, through my faith in my teacher and obedience to his words, I realised my true being.”

Nisargadatta never went to school. He was not a charismatic person. He lived in one of the worst slums in Bombay. But he radiated a spiritual presence which attracted seekers from all over the world and one of them from the West said that to be in the presence of this sage was “an incredible experience.”

Like many other sages, the details of Nisargadatta’s early life were not well-known. He was born in a small village in Maharashtra and given the name Maruti. When he attained the age of 18 his father died leaving behind his widow, four sons and two daughters. Maruti along with his elder brother left the village for Bombay. Maruti took to petty trading and started a shop for selling children’s clothes, tobacco and country made cigarettes. The business flourished and Maruti got married and had a son and a daughter.

In the course of leading his life as an ordinary small trader and householder, Maruti was led to his Guru. He followed the instructions of his Guru which led to some self-transforming spiritual experiences and set him decisively on the spiritual path. Maruti the trader is on the way of becoming the sage and the Master, Sri Nisargadatta Maharaj.

In the Indian spiritual landscape, when a seeker has such a decisive spiritual experience he or she tends to renounce the world and becomes a wandering monk or retires into the Himalayas for meditation or sets up an ashram. Later in his life, Nisargadatta also succumbed to this Indian spiritual inclination and became a sanyasin. But he realised soon that it is not necessary and returned to Bombay. But for this brief period when he became a wandering mendicant, Nisargadatta was doing his business and lived with his family and at the same time progressing rapidly in his spiritual life.

Kabirdas followed predominantly the path of devotion and reached the highest goal of his path. Nisargadatta followed the more difficult and arduous path of knowledge and attained the highest in his own path called as Sahaja Samadhi, which means a total and unbroken identity with the changeless and eternal Reality beyond space and time; not in some trance, but in the waking state. Both Kabir and Nisargadatta attained their spiritual goal by living in the world, pursuing their professional occupation and family life along with their spiritual life. Here are some excerpts from the dialogues of Nisargadatta, where he gives a glimpse of his inner realisation and also how he attained it.

Q: Kindly tell us how you realised.

Q: What happened? What was the change?

Master: Pleasure and pain lost their sway over me. I was free from desire and fear. I found myself full, needing nothing. I saw that in the ocean of pure awareness, on the surface of the universal consciousness, the numberless waves of the phenomenal worlds arise and subside beginninglessly and endlessly. As consciousness, they are all me. As events they are all mine. There is a mysterious power that looks after them. That power is awareness, Self, Life, God, whatever name you give it. It is the foundation, the ultimate support of all that is, just like gold is the basis for all gold jewellery. And it is so intimately ours!

Nisargadatta’s teachings like that of Ramana Maharishi, another great sage of modern India, is centred on the question, “Who I am.” According to Nisargadatta, “I AM” is the most fundamental, intimate and direct human experience. So, the most direct way of knowing our true self, which is universal, infinite and beyond space and time, is to enquire into the very source of this “I AM” experience. As he explains:

“Go deep into the sense of “I am” and you will find. How do you find a thing you have mislaid or forgotten? You keep it in your mind until you recall it. The sense of being, of ‘I am’ is the first to emerge. Ask yourself whence it comes, or just watch it quietly. When the mind stays in the ‘I am’ without moving, you enter a state which cannot be verbalised but can be experienced. All you need to do is try and try again. After all the sense ‘I am’ is always with you, only you have attached all kinds of things to it – body, feelings, thoughts, ideas, possessions etc. All these self-identifications are misleading. Because of them you take yourself to be what you are not.

Master: You need not get at it, for you are it. It will get at you, if you give it a chance. Let go your attachment to the unreal and the real will swiftly and smoothly step into its own. Stop imagining yourself being or doing this or that and the realisation that you are the source and heart of all will dawn upon you. With this will come great love which is not choice or predilection, nor attachment, but a power which makes all things love-worthy and lovable.”

The other important part of Nisargadatta’s teaching is calm, quietness and silence. Sometime has to be reserved everyday to remain calm and in silence. He also emphasised on eliminating selfishness. “Discard every self-seeking motive as soon as it is seen,” says Nisargadatta “and you need not search for truth; truth will find you.”