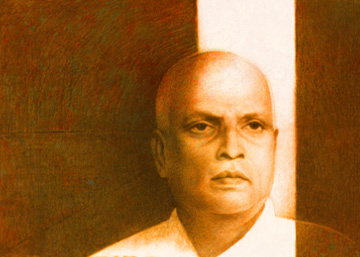 A modern seer who attained enlightenment while pursuing a successful career as a police officer.

Atmananda [1883-1959] is a spiritual teacher who retired as a Superintendent of Police in Indian state of Travancore called at present as Kerala. When an interviewer asked Atmananda, “Well Sir, is it a fact that you had all your spiritual sadhana while serving in the Police department.” Shri Atmananda replied firmly, “yes it is perfectly true. And I am quite serious when I say that if anybody sought my advice regarding the vocation or profession most helpful towards spiritual advancement. I would always recommend either the police or the military. Because, they offer the maximum obstacles and temptations. Success obtained under such condition is final, irrevocable.”

We may or may not agree with Atmananda’s preference for police and the military. The world of modern business perhaps offers much more obstacles and temptations than the military or police. But it is very true that a spiritual attainment achieved in the midst of the obstacles and temptation of life is much more stable and enduring than the one achieved in the confine of an ashram, mountain top or a cave. The difficulties and temptations of life provide the anvil on which the depth and quality of our inner realisation can be tested.

Atmananda, who was born with the name of Krishna Menon, belongs to an illustrious matriarchal Nair family in central Travancore. His father was a Vedic Brahmin. After his graduation he married, studied Law and joined as a prosecuting inspector in the police department of Travancore. He rose steadily in his career as a police officer and retired as a District Superintendent of Police. He passed through a phase of atheism before spiritual quest occupied his mind. After much studies and reflection he came to the conclusion only a living Guru can take him to the highest Truth. He prayed intensely to his personal god to bless him with a true guru.

Here comes an interesting occult phenomenon. The destined guru of Atmananda, a spiritually advanced yogi, called Yogananda, living in Calcutta, inwardly heard his call. Yogananda went to Travancore and initiated Atmananda in the path of yoga. A biographical essay on Atmananda’s life describes the various spiritual disciplines he went through, before attaining a state of consciousness which is regarded as the highest in the path of knowledge:

“The very day the swamiji left him, Shri Krishna Menon started an intense practice of his spiritual exercises, beginning with the path of devotion, in strict conformity with the instructions given to him. He rose steadily in the line of devotion till he took up Radha-hridaya-bhavana (meditation on the heart of Radha), the highest exercise of personal devotion to the ishta-deva. Thus he went through all the thrilling and intoxicating experiences of selfless love, culminating in its own Samadhi. It did not take him more than six months to cover all this. It was towards the end of this period that he composed his classic work, Radha-madhavam, of 48 verses in Malayalam. Next, he went through the hardest grind of yogic exercises, following the paths of different yogas in order.

A few more months of intense yogic practices took Shri Krishna Menon to the highest experiences in the line of yoga. Long and deep nirvikalpa Samadhi he enjoyed often and at will. But it failed to satisfy him, because it was time limited and caused as a result of intense effort. According to him, Truth is uncaused, permanent and self-luminous. Therefore, he had to seek for the ultimate Truth by other means. Then he took to regular Jnana-sadhana with great ease and fortitude, and realized the ultimate Truth in a very short time.”

From Padmanabhapuram, he was transferred in succession to Trivandrum, Kottayam, Nagercoil, Chengannur, Alwaye, and again to Kottayam, Trivandrum and Quilon – as Prosecuting Inspector, Station Inspector, Assistant Superintendent of Police and District Superintendent of Police. For over a year, he was deputed on special duty to codify and prepare the long neglected Police Manual of the state. He retired from service in 1939, while serving as District Superintendent of Police at Quilon. He was the terror of advocates who opposed him, because of his mastery over the law. Several heads of the Government under whom he served have recorded their high appreciation of his integrity, resourcefulness, intelligence, deep respect for the law and above all his unquestionable efficiency. In service as well as in phenomenal life, he always upheld established law, high moral standards and humane justice. He fought stubbornly against his own superiors in service and even against Government, for principle and justice. A few months before his retirement superannuation was precipitated by such a fight against Government for principle and justice. He neither let down his erring subordinates, nor gave them up to the mercy of his superiors. He always punished them himself leniently and they in return loved him unreservedly and obeyed him, to the envy of even his superiors. He never made use of the services of his official subordinates except for strictly official purposes.

In his spiritual journey Atmananda became a well-known guru in Kerala with many Indian and foreign disciples. His teachings to his disciples were based on the vedantic method of enquiry called Vichara through what he called as “higher reason.” The method proceeds through a process of deep questioning of all assumptions and probing into the deeper truth of everyday experiences like waking, dream and sleep and the principles of existence like Individual and the Universe, asking deeper and deeper questions until you reach the ultimate foundations of all experience or principles. The path uses logic but goes beyond logic to direct insight or identity. Like all spiritual teacher, Atmananda had the power to transfer his own experience to his disciples. As a disciple of Atmananda describes his Master’s method of teaching:

“Those of the disciples who were chosen by him were given the final course of regular tattvopadesha, when the whole Truth was expounded by him in a connected manner. Each time, it was particularly addressed to a few disciples, who were thus enabled by unassailable logic and argument to direct their attention wholly to the real being in them, beyond body, senses and mind. At this point, in spite of all their resistance, a mysterious force (the force of Truth) emanated from the Guru and encompassed each of them in a sense of oneness with the Guru. This enabled them to stand consciously as that ultimate principle whose characteristics were already expounded in unambiguous language. They [the disciples] were then asked simply to cling on to that experience, and to make themselves more and more familiar with it, by trying to transcend body, senses and mind as often as possible, automatically experiencing the ultimate Truth every time. This they did and gradually got themselves established in the ultimate Truth, in response to their own earnestness, sincerity and effort.”