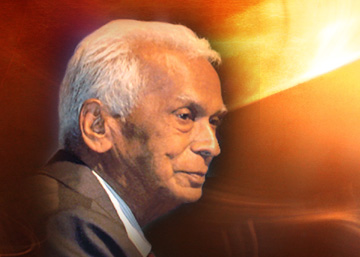 Dr. Govindappa Venkataswamy [1918-2006], called as Dr. V, was an ardent spiritual seeker and a great institution builder. He was able to build an institution where spiritual inspiration, social sensitivity and kindly service blend harmoniously with professional excellence, executive skill and corporate efficiency.

Let us begin with some of the institutional and performance landmarks of the institution founded by Dr. V, Aravind Eye hospital. Beginning in 1976 with a modest 11-bed private clinic with a mission to “eradicate needless blindness.” Dr. V’s institution has grown into the Aravind Eye care System, the largest eye-care provider in the world. Aravind received the Gates Award for Global Health in 2008 and the Conrad N. Hilton Humanitarian Prize in 2010; it was listed as one of the world’s fifty most innovative companies by the well-known business magazine Fast Company. The case study on Aravind is required reading for MBA students in Harvard Business School and in many other B-schools in US.

The Aravind Eye Hospital (AEH) in Madurai has grown into a 1500 bed hospital performing nearly 95000 eye surgeries every year. In addition to Madurai there are eight more AEHs located in Chennai, Tuticorin, Tirupur, Hyderabad, Tirunelveli, Coimbatore, Theni and Pondicherry. The Eight hospitals together perform a total of more than 2 lakh surgeries every year which is nearly 45 percent of all surgeries performed in the state of TamilNadu and 5 percent of the total in India; it was the single largest cataract surgery provider in the world. The AEH group is not merely a chain of hospitals but a total eye care system consisting of a centre for manufacturing synthetic lenses, sutures and pharmaceuticals related to eye care; an institution for training in every aspect of eye care; an institution for research; an eye bank; a woman and child care centre; a postgraduate institute of Ophthalmology offering MS degree; and a centre for community outreach programme.

We made a brief review of the achievement of AEH. Let us now look at the Man behind the success story, Dr. Govindappa Venkataswamy, Dr. V.

Dr. V was born in 1918 in a small village in South India. He received his medical degree from Stanley Medical College, Chennai in 1944. He joined the Indian Army Medical Corps, but had to retire in 1948 after developing severe rheumatoid arthritis – a disease that left his fingers crippled and changed the course of his life. Despite his condition he returned to medical school and earned a Diploma and Master’s Degree in ophthalmology. With hard work and determination, Dr. V trained himself to hold a scalpel and to perform cataract surgery. In time, he personally performed over one hundred thousand successful eye surgeries.

He joined the faculty at Madurai Medical College as the head of the department of ophthalmology and later served as the Vice Dean. In these capacities he introduced a number of innovative programmes to attack the problem of blindness in India, including the outreach eye camps, the initiation of a training programme for ophthalmic assistants and the world’s first rehabilitation centre for the blind.

In 1950 Dr. V met Sri Aurobindo – a poet, philosopher, and sage. He was influenced deeply by him. Driven by the compassionate urge of his heart to eliminate needless blindness and inspired by the spiritual vision of Sri Aurobindo, Dr. V. set in motion a 30-year old, and still continuing, crusade against blindness – Aravind Eye Care System. At the age of 55, Dr. V first saw the golden arches of McDonald’s. That was the beginning of his dream to give eyesight to millions. He reasoned when McDonald’s could sell billions of low-cost burgers, he could also sell millions of low-cost sight restoring operations. In 1978, Dr. V started AEH after mortgaging his house. It had 12 beds then. By the end of 2003, this hospital was offering ultra-modern facilities and 3000 beds.

Dr. V is a soft and gentle leader who leads not by command and control but by his living example and humility. Here are some illustrative episodes. A new guard confronts Dr. V at the entrance of the hospital, “Sit down, old man, you’re blocking people.”

A senior doctor of AEH walks in and asks, “Dr. V, what are you doing here in reception.” Dr. V replies: “I was told I can’t go in, so I’m waiting.” And another one: a doctor of AEH, returns from a camp with high fever and wants to take a day off. As she arrives at the hospital late, Dr. V asks, “What are you doing here.” She says, “I am having high fever.” Dr. V replies, “My fever is 104, how high is yours.”(1)

However, Dr. V’s inspiration is not entirely moral and social but mainly spiritual. Dr. V is primarily a yogi who happens to be a doctor and a social entrepreneur. He wrote in his diary, “I have been doing yoga since 1936, from the age of 18 years consciously or unconsciously.” Behind the moral and social vision of eradicating blindness, Dr. V has a spiritual vision based on Sri Aurobindo’s teachings. Here are some statements from Dr. V’s talks, interviews, which give an indication of the spiritual faith and vision behind his works and achievements.

“I ask God that I be a better tool, a receptacle for the divine force.”

“Our effort is to make Aravind an instrument of the Divine Will. We strive to forget our limitations and work with the direction of the Divine Will, not in a vain superficial way but with a deep commitment and faith that guidance comes from a higher level of consciousness. Then one is able to work with the great confidence that comes only with that faith and realization that we are all part of a spiritual capacity or spiritual power. It is then that all of nature works with you. You don’t feel that you are a superior being but you are an instrument in the hands of a higher force and it is in that spirit that we meet our day to day struggles and successes.”

“To some of us, bringing divine consciousness to our daily activities is the Goal. The Hospital work gives an opportunity for this spiritual growth. In your growth you widen your consciousness and feel the suffering of others.”(2)

Dr. David F. Chang, regarded as one of the best among cataract surgeons in US, recall what he felt when he first met Dr. V, “He has an amazing aura. It was like being in the presence of a living legend. He brings a lot of energy and purpose to everyone he comes into contact with. I really think Dr. V’s spirituality is an important driving force at Aravind.” Similarly, Dr. Kash Raghavan, who prepared the cast study on Aravind for Harvard Business Schools, observes, “Everything revolved around the thing Dr. V was talking about… this man’s spirituality wasn’t incidental to the story. It was what everything else hinged on.”(3)

Most of the corporate studies tend to ignore or underplay this spiritual dimension behind Aravind’s success. But Aravind’s success cannot be fully understood without this higher inspiration behind it. As Pavitra Mehta and Suchitra Shenoy rightly point out in their book on Aravind Eye Hospital:

“Every organization operates with a set of reference points that reflect its ultimate motivation. Aravind too, through Dr. V, has a touch-stone. If left unexamined, explanations of Aravind’s work and what it offers to the world will always be incomplete. Dr. V believes Aravind’s work is a manifestation of Sri Aurobindo and the Mother’s influence. Whether or not this is true is irrelevant. The objectives, systems, and culture of Aravind certainly do not demand belief in spirituality. But the fact remains that they were created and distinctly shaped by one man’s sense of an inner reality. This is why you cannot give short shrift to Dr. V’s spirituality when tracing the path of Aravind’s evolution. It threads through everything: his priorities and perspectives, his vision for Aravind, his leadership practices, and the unique impact he has on the people who work with him. It is what linked this man’s individual quest to the evolution of the largest eye care facility in the world.”(4)