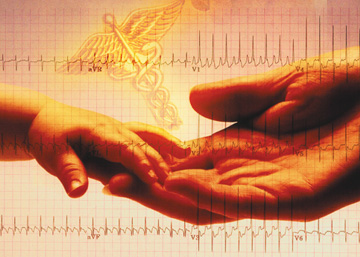 The doctor is the mechanic of medicine who repairs disease and sickness in the human machine. A healer is the sage of health who brings harmony and wholeness to the living human being. A dialogue and a story based on the Chinese paradigm of health.

The period is ancient China. A doctor from another nation and culture came to China to study the ancient Chinese system of medicine. He meets a Chinese healer and asked,

“What is your ideal of health?”

The doctor said, “Looks a little abstract, philosophical and dreamy,” and queried further.

“But how do you treat various forms of sickness?”

“We don’t think in terms of sickness but in terms of Health. For the function of the doctor is not to treat sickness but to maintain and improve the health of the people. His function is not just to give medicine when a person gets sick but to provide the individual and the community with a complete and continuous health education and guidance which will help them to lead a healthy and harmonious life.”

“Your concepts and ideals are very high and noble,” said the doctor. “But tell me how the system is put into practice. For example, how do you detect, prevent and cure an illness? How do you charge the patient for treating or curing his sicknesses?”

The Chinese healer replied with a frown on his face, “I don’t like your constant emphasis on sickness. As I told you already, here, the healer is paid not for treating sickness but to maintain health. Each family has a healer and he is paid a fixed monthly fee for maintaining and improving the inner and outer well-being of the family.”

The doctor interjected, “But suppose a member of the family falls sick…”

The Chinese healer let out an exasperated sigh and said with a serious and mournful face:

“If such an unfortunate thing happens, it will be viewed as a serious moral and professional lapse on the part of the healer. He has failed in fulfilling his responsibility to the family. He has to ask forgiveness from the family and God. He has to introspect deeply and humbly to find the root causes of such a lapse and correct them. And, apart from treating the sick person with great care and consideration, he has to pay fine to the family for his dereliction of duty to the family.”

The doctor exclaimed in amazement, “You mean the doctor has to pay the patient! That is ludicrous!!”

The Chinese healer replied calmly, “Why, it is perfectly justified,” and explained further.

The doctor interrupted again and said, “But surely the doctor cannot be held responsible if the patient falls sick because of his unhealthy habits.”

The healer nodded his head in agreement and said, “Of course, the doctor cannot be held responsible for someone who disregards the doctor’s advice and wilfully or deliberately ruins his health by indulging in self-destructive habits. But such cases are rare. In a family with sane and reasonable people, if someone falls sick with serious health problem, then the healer of the family, as the guardian of the family’s health, has to accept the blame and responsibility on himself. And for this lapse he has to compensate and pay fine to the family.”

“What sort of compensation and fine? ” queried the doctor.

“For example, if the bread-winner of a family falls sick and was unable to go to work, then the healer, apart from treating him for his illness, has to pay the family the amount he might have earned during his sickness. Similarly if a housewife falls sick and was unable to do her work, the healer has to employ a servant to do the household work and pay him or her from his own money. Apart from this compensation, he must also pay some fine to the family as a token of repentance for his negligence in fulfilling his responsibility towards the family.”

The doctor who comes from a nation which has never attained the level of culture and idealism achieved by the ancient Chinese, listened to his counterpart with mixed feelings – admiration for the high and lofty ideals of this great nation but at the same time a sense of disbelief whether such ideals are really practicable. He remained silent and thoughtful. His silence was interrupted by the voice of the Chinese healer, “I have described to you our system of health. Now let me learn something about your paradigm of health.”

The doctor replied hesitantly, “Our system of medicine doesn’t have your great ideals. But I think it is more practical. Our system is very individualistic, impersonal and pragmatic. Our central emphasis is on the cure and prevention of disease. When a person falls sick he goes to a doctor who treats him and receives a fee from the patient for consultation and medicine”.

“Which means,” said the healer, “in your system, the relation between the healer and the patient is like that of a machine and the mechanic and not like between two living human souls. The human machine when it goes out of order goes to the healer, the mechanic, who sets right the machine and gets paid for it.” The doctor nodded his head, a little ashamed, and said, “Yes, it is somewhat like that.”

The healer after a few minutes of silence said:

“It seems to me that in your nation all the doctors are occupied solely with disease and sickness. And also, you seem to have no higher ideals than treating sickness and making money. In such a system all the doctors will be consciously or unconsciously wanting people to become sick so that they may treat them and make money. When the doctors of a nation think on these lines, then the health of the entire nation will be ruined. And you call such a barbarous system as practical!”