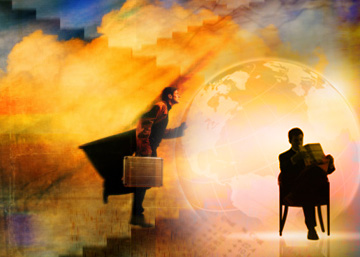 Dynamic intelligence; marshalling the will; taming the vital energy; role of imagination.

The faculty of Will has a mental and vital element. The mental or cognitive element is the act of choice and judgement. The vital or dynamic element is the firmness, persistence, endurance and strength in the upholding and enforcing the choice in action, result, realization. What is called as Faith is the expression of the intelligence in will. However true faith is not the belief in the surface mind, but the intuition of the deeper and inner being and its will. It is the intuition of an unmanifest potentiality of our inner being not yet manifested at the surface level. All great men of action have this faith. They persist in realizing a goal, which may appear impossible or totally contradictory to the present condition. But they still persist, because the intelligence or faith in their will knows that they have the potential to do it and can do it. This intelligence in the will can be developed by rejecting pessimistic thinking, which darkens and weaken the will, and consciously cultivating a hopeful and optimistic attitude and a sunny self-confidence.

This capacity for implementation of ideas comes from the dynamic power of will and the energy of vitality, anima. The power of will can be strengthened in the same way as building muscles. We must begin with easy and simple resolutions and tasks, which are within our capacities and move on slowly and gradually to more and more difficult, complex and tough resolutions and tasks. The initial easy masteries or victories build self-confidence, which strengthens the will. The other faculty or power of our consciousness which is closely related to will is the power of concentration, which means the ability to focus all the energies of our consciousness on an idea or activity. Concentration and will has a mutually reinforcing effect. A persistent and untiring effort to focus our attention on a point develops the power of will, which in turn enhances concentration.

The other part of our dynamic faculties is the vital force, which animates our body and mind. This vital force, called as Prana in Indian thought and Anima in Jungian psychology, is the source of energy, enthusiasm, desire, emotional intensity, force and effectiveness in executive action. It is the combined power of will and vital force, which converts an idea or knowledge into a force for material realization. This force and intelligence of life in us grows by joyous participation in all the varied activities of the life around us, building harmonious relationship and also confronting all the problems, difficulties, dualities and challenges of life with equanimity, courage, endurance, faith and hope. Our personal force of life in us is only the individualized whirl of energy of the universal force and energy of life. So the power and effectiveness of our vital force can be considerably multiplied by opening it to the universal vital energy of Nature.

There are many ways of doing it. Exercises like pranayama are the more physical method. There are also more psychological methods. One of them was visualization, to imagine we are floating in a ocean of vital energy pulsing everywhere, and visualize it as entering into us and energizing us. Certain inner psychological attitudes, when cultivated and established in the thinking, emotional and vital consciousness, can bring about an enduring inner opening to the universal vital energy. Effort for progress, which means making a constant and continuous effort for progressive perfection in work, makes us receptive to universal forces, vital and mental. Positive attitudes like generosity, wideness, self-giving, dedication to a self-transcending cause help us to attune our mental and vital consciousness to the universal energies of Nature. We must note here increase in vital force enhances the performance and productivity of not only the faculties of action but also the faculties of knowledge in the mind. For, vital energy is the “anima” which animates body, mind, heart and will. So as the flow of vital energy increases it can make a dull mind active and a bright mind more creative, energetic and productive.

The Role of Imagination

The faculty of imagination can be of great help in enhancing the potentialities of our dynamic intelligence and energies. The essence of imagination is the ability to visualize ideas in concrete images or symbols. Through imagination, abstract ideas can be made sensuous, emotive and concrete to the mind. For example consciousness can be visualized as inner light revealing things within us. Imagination can lead to intuition of the unmanifest possibilities of the future. Imaginative and intelligent understanding of history, comprehending the past events and present actualities in a holistic perspective, can intuitively extend itself towards the future potentialities. An optimistic, hopeful and intuitive imagination of the future potentialities when expressed in a creative and evocative language acts as a call to these unmanifest future scenarios and brings them down or hastens their manifestation into the present. The other use of imagination is to lubricate the exercise of will with emotional support. If we are able to visualize clearly the future benefits of a task or resolution, and impress this image on the emotive being, it harnesses the support of our emotions to the task, which in turn felicitates the exercise of will.