Fourth Dimension Inc. > Management by Consciousness > Human Potential > Harnessing the Power of Will 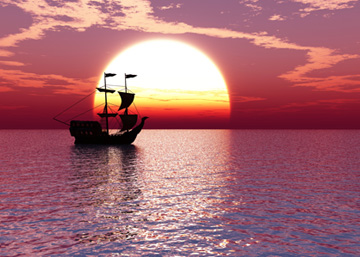 What is the inner source of will? How to develop will-power? How to will truly? What is the real source of weakness in will? These are question, which every one of us who are in the path of self-development might have asked at some stage of our growth. This article answers these questions with deep insight and in simple words.

Man, because he is a thinking being, first gets an idea, then he invests this idea with a force, a vital power, a power for action, and changes it, transforms it into will. This will is then concentrated on the object to be realised, and with the vital force and effort added to the thought, the conception, it becomes the lever of action.

So long as the thing goes on in the head in this way (Mother turns a finger near her forehead), it has no power. It has a very little force that is extremely limited. And all the time it belies itself. One feels that with great difficulty one has gathered up one’s will, artificial enough, besides, and one tries to catch something, and the very next minute it has all vanished. And one doesn’t even realise it; one asks oneself, “How did it happen?”

The will is not in the head.

The will-what I call the will-is something that’s here (Mother points to the centre of the chest), which has a power of action, a power of realisation.

Mother, how can one strengthen one’s will?

Oh, as one strengthens muscles, by a methodical exercise. You take one little thing, something you want to do or don’t want to do. Begin with a small thing, not something very essential to the being, but a small detail. And then, if, for instance, it is something you are in the habit of doing, you insist on it with the same regularity, you see, either not to do it or to do it – you insist on it and compel yourself to do it as you compel yourself to lift a weight – it’s the same thing. You make the same kind of effort, but it is more of an inner effort. And after having taken little things like this – things relatively easy, you know – after taking these and succeeding with them, you can unite with a greater force and try a more complicated experiment. And gradually, if you do this regularly, you will end up by acquiring an independent and very strong will.

The Power of Endurance

Unless you are resolved to begin the same thing over again a thousand times if need be… You know, people come to me in despair, “But I thought it was done and now I must begin again!” And if they are told, “But that’s nothing, you will probably have to begin again a hundred times, two hundred times, a thousand times; you take one step forward and think you are secure, but there will always be something to bring back the same difficulty a little farther on. You think you have solved the problem, you must solve it yet once again; it will turn up again looking just a little different, but it will be the same problem”, and if you are not determined that: “Even if it comes back a million times, I shall do it a million times, but I shall go through with it”, well, you won’t be able to do the yoga. This is absolutely indispensable.

People have a beautiful experience and say, “Ah, now this is it!…” And then it settles down, diminishes, gets veiled, and suddenly something quite unexpected, absolutely commonplace and apparently completely uninteresting comes before you and blocks your way. And then you say, “Ah! what’s the good of having made this progress if it’s going to start all over again? Why should I do it? I made an effort, I succeeded, achieved something, and now it’s as if I had done nothing! It’s indeed hopeless.” For you have no endurance.

If one persists, there comes a time when one is victorious.

Victory is to the most persistent.

How to Will Truly

To learn how to will is a very important thing. And to will truly, you must unify your being. In fact, to be a being, one must first unify oneself. If one is pulled by absolutely opposite tendencies, if one spends three-fourths of one’s life without being conscious of oneself and the reasons why one does things, is one a real being? One does not exist. One is a mass of influences, movements, forces, actions, reactions, but one is not a being. One begins to become a being when one begins to have a will. And one can’t have a will unless one is unified.

And when you have a will, you will be able to say, say to the Divine: “I want what You want.” But not before that. Because in order to want what the Divine wants, you must have a will, otherwise you can will nothing at all. You would like to. You would like it very much. You would very much like to want what the Divine wants to do. You don’t possess a will to give to Him and to put at His service. Something like that, gelatinous, like jelly-fish… there… a mass of good wills – and I am considering the better side of things and forgetting the bad wills – a mass of good wills, half-conscious and fluctuating….

There are people who tell me, “I don’t have the will-power.” That means you are not sincere. For sincerity is an infinitely more powerful force than all the wills in the world. It can change anything whatever in the twinkling of an eye; it takes hold of it, grips it, pulls it out – and then it’s over. But you close your eyes, you find excuses for yourself.

There is always a moment when everyone has self-control. There is not one human being who has not the energy and capacity to resist something imposed upon him – if he is left free to do so. People tell you, “I can’t do otherwise” – it is because in the depths of their heart they do not want to do otherwise; they have accepted to be the slaves of their vice. There is a moment when one accepts.

You say, “I want to be cured of this”; unfortunately it is not enough to say “I want”, there are other parts of the consciousness which hide themselves so that you may not take any notice of them, and when your attention is turned away these parts try to assert themselves. That is why I say and shall always repeat: Be perfectly sincere; do not try to deceive yourself, do not say, “I have done all I can.” If you do not succeed, it means that you are not doing all you can. For if you truly do “all” that you can, you will surely succeed…. Even the things and suggestions that come from outside can touch you only in proportion to the consent of your consciousness, and you are made to be the master of your consciousness, If you say, “I have done all I can and it continues in spite of very thing, so I give up,” you may be sure in advance that you have not done what you could. When an error persists “in spite of everything”, it means that something hidden in your being springs up suddenly like a Jack-in-the-box and takes the helm of your life. Hence, there is only one thing to do: it is to go hunting for all the little dark corners which lie hidden in you, and if you put just a tiny spark of goodwill on this darkness, it will yield, it will vanish, and what seemed impossible to you will become not only possible, practicable, but it will be done. In this way you can in one minute get rid of a difficulty that would have harassed you for years. I absolutely assure you of it. It depends only on one thing: that you truly, sincerely, want to get rid of it. And it is the same for everything, from physical illnesses up to the highest mental difficulties.